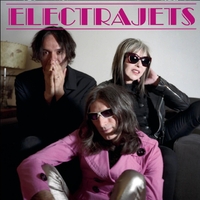 New Yawk punk and roll royalty with debut (and final!) album. Joe Whyte gets the lowdown.

In something of an almost perfect bit of synchronicity/bad luck, NYC’s Electrajets released this debut album and split up due to the ill health of guitarist/vocalist Jeff Ward literally as it hit the shelves. Jeff is thankfully convalescing in Panama although the band have now dissolved. I guess if you’re a band that’s gonna release one album and split, its fitting that it’s one as perfectly formed as this one.

Electrajets were Jeff Ward who’d been in UK-based glam-punkers Gunfire Dance before relocating to NYC some years ago to write and ending up collaborating with the great and good of the city’s punk scene; bassist Cynthia Ross was in The B-Girls (who toured with The Clash) and is currently in the mighty New York Junk- she is also the fresh-faced blonde girl in that infamous bit of footage of Sid and Nancy on public access TV with her then beau Stiv Bators which predates the messy end of Nancy in the Chelsea Hotel and Sid’s subsequent arrest and death. The drummer is Dahm Majuri Cipolla  who is also a multi-instrumentalist with Phantom Family Halo.

The album is a mish-mash of influences, some obvious, some less so. The opening 4am Strangeways has the platform-booted footprints of Bolan, Bowie and Ronson writ large across it and that glam-stomp drum beat is evident throughout the record. It doesn’t sound particularly retro or cheesy, however; there’s a slightly sinister and dare-I-say-it downright nasty edge to the songs which is at odds with the good-time  bonhomie of most of the glam of the seventies. I suppose it’s the dirt, sleaze and grit of NYC that pervades the songs; it’s difficult, I guess, to avoid having that little tiny bit of cynical cool when you’ve spent most of your life there.

There is also a little bit of the poetry of Jim Carroll and Patti Smith’s Rimbaud-summoning in Ross’s Darkness; scraping viola and her near-whispered vocal give a taste of breathless nighttime and a creeping paranoia.

How Could You (B Girl) nods to Ross’s previous adventures and is a swooning piece of psych-pop with Ward’s falsetto vocals and the bands delicate, blues-y sway. Sonic Ray made me think of a punk rock Nick Drake with it’s gentle textures and pulsing rhythms. One would expect a band with a pedigree such as theirs to be all Dolls swagger and Johnny Thunders bluster but they’ve avoided that in favour of this many-hued beast.

New York Junk released one of my albums of 2015 in Doin’ Time In New York City and this one-off from Electrajets is certainly settling into prime position this year.

Get ’em before they’re gone.