Home Blogs Election special : 5 Things That Might Cost the Conservative Party the... 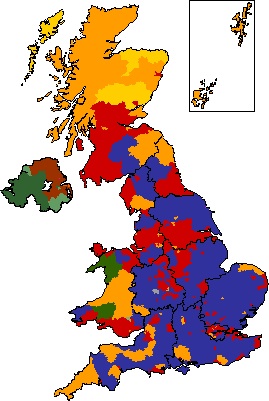 5 Things That Might Cost the Conservative Party the Election

With two weeks to go until polling day, Fergal Kinney takes a look at the five flaws in the Tory campaign that just might help oust them from power.

Cameron recently claimed that the Conservative party being labelled as ‘the party of the rich’ made him “more angry than almost anything else”. Not quite so angry, it seems, as to stop the bulk of his party’s policies reflecting – well – the specific interests and demands of the rich, but angry all the same. That voters perceive a political party is on their side holds a lot of sway in how floating voters cast their votes – the 2012 re-election of Obama is a textbook example of how pitting your rival as on the side of the super-rich can help even a personally unpopular candidate trailing on economic competence (sound familiar?) win an election. Cameron’s Achilles’ heel is already in the extent that voters perceive him as an out-of-touch old Etonian toff, and the more Labour can play with that – see their abolition of non-dom status policy – the greater their chances of victory.

At Conservative Central Office in September 2010, one George Osborne was reported to have fallen to his knees and shouted “Yes, yes, yes!” as the news screens relayed footage of Ed Miliband having been declared victor of the Labour leadership contest. As the campaign enters its final throws, it appears the Conservative party are still relying on Ed Miliband to do much of their work for them. The warning from Tory peer Lord Pattern, earlier in the year, that his party leadership should not underestimate Ed Miliband appears increasingly prescient, as Miliband’s personal ratings continue to rise. Indeed, as voters now more than ever report in polling that they expect a Miliband-led government, the Tory party seem insistent on fighting a caricature of Ed Miliband as oppose to grappling with the Labour leader’s genuine weaknesses. The Tories, and their friends in the press, seem still confused over how to attack Miliband. Is he the ruthless, back-stabbing cad described by Michael Fallon, or the weak, ineffectual puppet David Cameron is basing his pitch on? Likewise – is Miliband, as the Tories would like potential SNP/Green voters to believe, another shade of austerity who sided with the Tories over 30bn cuts in the next Parliament, or is he “ a return to the Benn/Livingstone approach” as decried this week by Boris Johnson, with Middle England’s fears in his sights? Though many on the left of the Labour party may wish this label to be true, the more the Tories ramp up the hyperbole, the more out of touch they appear.

In his first speech as Tory leader, Cameron famously told his party to focus on optimism and “let sunshine win the day”. Fast forward to 2015, and modernisation, ‘blue-sky thinking’ and the Big Society are all but forgotten. Crackdown on benefits for the obese? Check. Colossal welfare cuts that don’t need to be spelled out? Check. Demonising Scottish voters as if their vote is wholly illegitimate? Check. Tony Blair once warned that voters won’t buy change from “someone who they regard as ideologically motivated” – though this ignores the electoral success of Margaret Thatcher, it does speak to the heart of why many voters may still be put off voting Tory, especially in marginal constituencies.

Ah, marginal constituencies. Owing to the quirks of the First Past the Post voting system (a big thanks to everyone who voted against voting reform in 2011…), as the two major parties appear gridlocked in the polls it’s more likely than ever that this election will come down to a handful of swing seats. Sheffield Central is one, Solihull another, and the Tories are still at a disadvantage in these seats, where Labour’s superior number of motivated activists will be in overdrive on the day. This also goes some way to explain why, as the Guardian reported this week, Young Republicans from the US are being shipped over to help in these battleground seats – though quite how successful hoards of Americans may prove in a seat such as Bury North remains to be seen.

One of the few genuine surprises of this election campaign was David Cameron’s admission that he would not desire to fight for a third term as Prime Minister. For the leader of a party yet to win a majority since 1992 to be weighing up the finer points of a third term may seem highly presumptuous (because, er…it is), but it was certainly no accident or slip of the tongue – Cameron knows that many on the Tory back benches want to see him ousted and this was something of a concession to those voices in his party that he will not be around forever. Labour should make as much of this as possible. Over the last five years, the direction of travel in the Conservative party has been increasingly rightwards, and floating voters who may warm to Cameron may not warm so much to the idea of a more right wing, Euro-sceptic leader to arrive mid-way through the parliament. Equally, for Cameron to be warning of the ‘chaos’ of an SNP/Labour pact feels a bit rich when a second Tory term would involve an EU referendum and a struggle for power within the Conservative party itself. One can only worry the only reason Labour aren’t pressing this home harder is that the idea of a Cameron premiership followed by a Boris Johnson one may actually have some appeal for many voters.