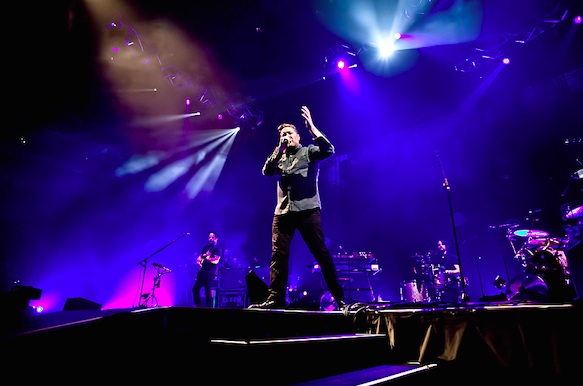 I’ve spent the week looking at videos of Elbow at Nottingham’s Rock City in 2008 and cursing the lack of musical smarts that caused me to miss that gig. In 2014 they’re much too big for Rock City and are at the arena and I don’t really like arenas, (although Nottingham’s Capital FM Arena is the best of the bunch to visit and take photographs at, not least because it’s nice to go somewhere where the security staff don’t treat you like shit). Financially huge venue shows are a necessary evil of course, (this tour has both a string and brass section, three cameramen and two blokes sitting way up in the lighting rigs which is thirteen extra mouths to feed), but there’s something about big domes full of ironworks and tiered concrete that isn’t conducive to listening to music.

Somehow or other however, and with the assistance of an audience with whom they are happy to collaborate, Elbow manage to make the emptiness into a remarkably intimate space and for most of the time it’s possible to forget the surroundings and just enjoy the music. And it’s great music. Their set mixes showmanship and candour in a fine balance which could, in hands less deft than Guy Garvey’s tip over into mawkishness or self parody, but they carry it off in style.

Support is from Jimi Goodwin, formerly (and probably still) bassist, vocalist and occasional drummer with Doves and a long time collaborator with Guy Garvey and Elbow. He makes himself a lot of new fans with an acoustic set drawn mostly from his new solo album Odludek, including the moody and echoing Didsbury Girl and country tinged Oh Whiskey, a hymn to alcohol and lost childhood. Doves’ favourites Snowden and The Last Broadcast get a big cheer from the crowd but it’s the new songs from that get most appreciation especially Keep My Soul In Song which comes in like a lullaby and leaves like a brand new cool jazz standard. I’m guessing he sold a lot of CDs at the interval.

When Elbow arrive several large screens at the back of the stage display the feeds from what seems like dozens of cameras mounted on instruments and mike stands plus two dolly cams at the front, to present a mosaic of images of the show in progress or of faces from the crowd. Garvey has a runway stretching to a dais deep in the auditorium from which he not only sings (accompanied briefly by the Potter brothers on guitar and upright piano, his drink resting on the top as if they were gathered for a sing around in their local) but also engages members of the audience in conversation on a wide variety of subjects.

They’re not a band that worry about the outer trappings of cool. Garvey searches out couples who are on first dates, pauses the show to point out the band’s coach driver and his wife in the audience and wish them a happy forty sixth wedding anniversary, discusses the merits of Coronation Street (which we are all missing) and manages to give the impression that the whole band are among the most thoroughly nice blokes you’ve ever shared a vast oval building with. Of course they may be monsters offstage. It’s possible. But that’s someone else’s problem – while they’re on stage they seem like exactly the kind of people you’d really like to hang out and maybe jam with a little.

The set list is made up in more or less equal measures of favourites from 2008’s The Seldom Seen Kid and this year’s The Take Off And Landing Of Everything (see Louder Than War review here) and despite their easy stage manner the band treat their back catalogue with considerable respect. This is not the kind of gig where songs are rattled off by numbers and only the hits get the full treatment. You get the impression that these are things that they are really fond of.

After an opening of Charge and The Bones Of You the first showstopper is Real Life, fragile at first, Garvey’s voice a slender falsetto, and then rising to become an anthem of hope –

“As the music pulls you through
And on that hallelujah morning
In the arms of new love,
The peace that you feel’s real life.”

The Night Will Always Win arrives with a background of white noise, a drum like a heartbeat and a keyboard motif that sounds like baroque church music and current hit New York Morning is epic and stately the sombreness broken by occasional bursts of fairground piano but it is Garvey’s vocal, at once vulnerable and muscular that dominates proceedings. It’s hard to pick out highlights from a set which doesn’t really have any dull moments and of course the crowd go particularly wild for Grounds For Divorce and One Day Like This but The Blanket Of Night is a song which proves itself to be a real sleeper, not my favourite on the new album by any means but performed live and accompanied only by the piano it is a song of huge delicacy and anger with its depiction of a couple fleeing their homeland for a contingent and uncertain future in the free west.

“Paper cup of a boat,
Heaving chest of the sea,
Carry both of us
Carry here,
Carry me.”

When Garvey sings it he sounds like he means it. At a time when all the major parties seem to be competing to see who can be most vile to refugees it would be a great song to see in the charts.