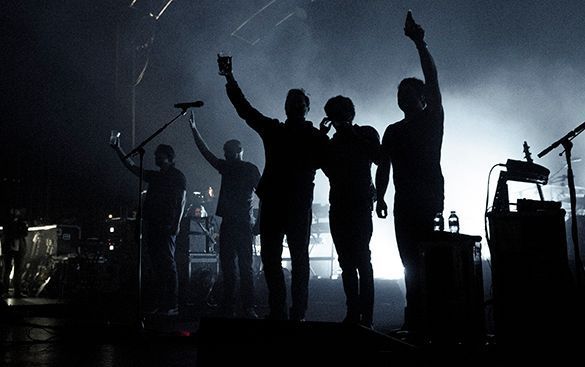 Mike Ainscoe reports back from the whole of Elbow’s four night residency Manchester  Apollo, with some stunning photos.

2014 was a good year for  Elbow  – a new number one album with some rather weighty commendations behind it (“best yet” seems to be bandied around quite regularly along with the five star reviews as the music press go to town in trying  to out do each other) and they seemed to be continuing to ride the wave which has seen them rise to becoming one of, if not the, nation’s favourites.

They’ve paid their dues in the pubs and clubs rather than take the manufactured celebrity route and recorded albums earlier in their twenty plus year time together, which didn’t exactly light up the skies until taking the Mercury Prize saw their stock take a rocket-like upturn.

With the band starting 2015 by taking up a residency at Manchester Apollo for four sold out, jam packed  nights before moving onto the Hammersmith equivalent for a similar three night stop off, Mike Ainscoe also set up shop on behalf of  Louder Than War to observe the unfolding events of a  suitably celebratory return to their home city.

More recently there hasn’t been much  reference to those early musical days of sweaty clubs and theatres – their live shows becoming  quite  polished productions in catering for the wide demographic which makes up their audience and it’s now suitably geared up for the enormo-domes and arenas up and down the country.  However, the multiple nights in a more intimate venue were just made for rewarding those long term fans with something a bit different.

Not that Elbow need a huge stage; the string and brass players tucked away behind Mark Potter’s guitar rig, both his and Pete Turner’s gear and amps stand balanced on the ‘elbow’ stencilled boxes in a nod to simpler times. Walking on as backlit  shadows for a most understated  opening of ‘This Blue World’ and remaining much that way for the majority of the show despite a beautifully lit stage, the band seem happy to remain anonymously in the dark. The focus naturally falls onto Guy Garvey with his frequent trips to the front of the stage –this time forsaking the  usual arena spectacle of a walkway into the crowd  – pointing and gesturing his way through the songs in that ever so distinctive style amid  his constant enquiries of   “everybody still ok?”

Often viewed as cuddly Uncle Guy, the first night  promise of “some old, some new and expect a few mistakes” was countered by  using the second night to quote the Manchester Evening News review and the usual old comparison of coming across as an avuncular Sociology teacher –  aiming for “less leather elbow patches and more leather trousers” look in a tongue in cheek attempt to be more of a mad, bad rock and roller. That familiar old labelling  is now wearing a bit thin, but thankfully he’s not become the sort caricature of himself, enjoying the sound of his own voice so much that provides the ammunition in which the  media delight,  a la Sting or Bono.

So with a set made up of a choice  selection based round the  tried, trusted and  expected,    some variation came in the inclusion of   ‘Any Day Now’ and  ‘Fugitive Motel’ (the strings evoking the old sound of a mellotron – but better), both set to become mainstays  for the duration along with a ripping ‘Mexican Standoff’   (“Young man’s music – I’ve put me back out!”)  and the sneering ‘Bitten By The Tailfly’, which pushed  Elbow into nudging the hard rock shelf with Guy matching Mark Potter in a most un-Elbow-like  twin guitar duel.  Following the feelgood of ‘One Day’ with what was introduced as a song about “trawling nightclubs in a sexually predatory fashion” was quite a jolt. With ‘Newborn’ ending the main set  each night, moving from Guy on solo guitar to chiming lead and stately organ, all leading to a massive strobe lit frantic prog rock style climax, it was a nostalgic trip which was worth the ticket price alone. 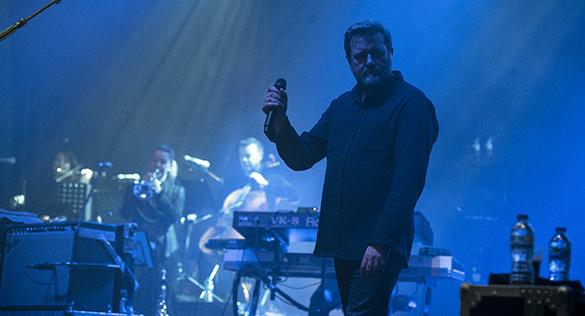 The startling absence of the hypnotic title track on the last tour (gambling men would have lost a packet on ‘The Take Off And Landing Of Everything opening or closing the show) got its premier during this run of dates and saw it emerging as possibly the most outstanding selection of the new songs on show; its thumping, thundering, almost Eastern rhythm and the mantra-like lyric creating a hypnotic buzz and following what could only be described as a brutal version of ‘The Birds’ – the slide guitar and keyboards developing into a massive towering wall of sound – on the final night began a half hour run which was as good as you’ll see in any rock show. Starting with the first appearance of ‘Station Approach’ over the four nights which had, to be frank, been notable by its absence and being almost their Manchester anthem, would have been a banker for many,  it was very much ‘the best of Elbow’ as they seem to have settled on a sequence which basically showcased their impressive grandeur.

The chance for some variations saw the likes of one off appearances for ‘Switching Off’ and ‘New York Morning’ on night #2, replacing a gorgeous  ‘Powder Blue’ and ‘Mirrorball’ from opening night. The curve ball thrown in showing  off the experimental Elbow in  ‘McGreggor’ added something a little unconventional tonight #3 and of course ‘Station Approach’ on the final night simply had to be dedicated to Guy’s mum in the audience, sat among the many friends and family in attendance and  who of course gets a mention in the lyric. 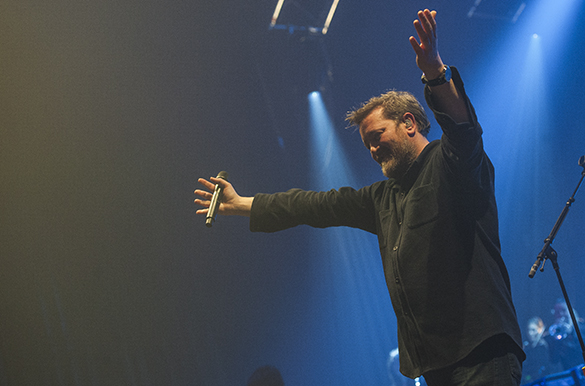 They live out their songs of their local area, bus rides into town, their loved ones  and growing up, it seems that the crows who gathered on the corner of ‘Lippy Kids’ have now moved along and become  the crippled crows of ‘My Sad Captains’ which is possibly the key song  of not just the new album but also the live show, now elevated to the status of taking the prime closing spot at the end of the evening. The aching reflective nature of the lyrics and it’s ‘last post’ trumpet sound scored particularly high on the emotional clapometer. All orange light (the “another sunrise” of the lyrics) and mass arm waving, it ensured that the evenings ended in a warmth and glow which is pure Elbow.

Noticeably though, throughout the run there still seem to be many in attendance as more recent Elbow converts. There’s the sheer delight as the whole theatre engage in mass audience participation for ‘One Day’ – which can’t be too far from becoming the next national anthem – yet when the band kick into the frankly much more interesting, ‘Bitten By The Tailfly’ rarity from the first album with its guitar duel between Guy and Mark Potter verging on an apocalyptic punk metal hybrid and menacing  “I’ll take – you home’ get you – on your own” lyric, it sees the bars and toilets taking  a good hammering. 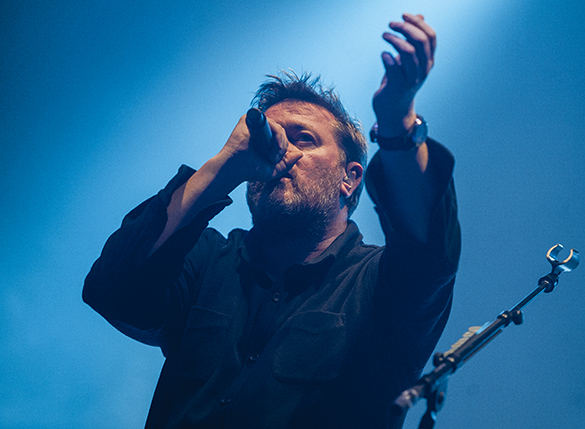 Picking a different support act for each night, local boy Joseph Lofthouse (a spot by Mark Potter in Ramsbottom’s First Chop)  and Black Rivers – including two former Doves – were perhaps the pick. With Uncle Guy’s encouragement to support their music, they are in a place where Elbow themselves once were and along with the collection buckets at the doors for local worthy causes, kudos to the band for trying to put something back into their community which has been a long standing support and which remains close to their hearts.

Music aside, the Elbow matey blokey ordinariness seems to not only be naturally endearing – you could imagine them all trooping down to The Castle or The Temple or joining their fans for free entry to The Roadhouse with a flash of their gig tickets for a post gig beer – but it transfers to their music and songwriting that result in songs which end up with bands like Elbow being declared, or maybe even saddled with, the label of ‘national treasure’. It would be easy to label the homecoming residency as ‘simply a triumph darling’ but without wanting to be patronising or simply guilty of viewing our local heroes through rose tinted glasses, it was exactly that.

Elbow can be found online here: elbow.co.uk. They’re also on Facebook and the band tweets as @elbow while their front person does so as @guy_garvey.