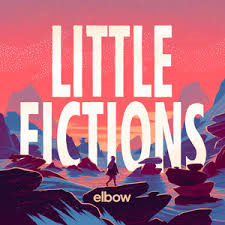 Louder Than War’s Michael Halpin reviews Elbow’s first album in three years and its one of their best.

Elbow’s first album since 2014’s The Take Off And Landing Of Everything is an eyebrow raising affair. Yes, all of the elements of what makes Elbow so endearing are there; Guy Garvey’s soaring vocals, a slightly off the wall musical blend and those bittersweet lyrics that can draw both a smile and a tear in the same breath.

In a recent interview with Radio X, Guy Garvey described Jupp as ‘someone who can never be replaced’ and this is very much true. Keyboard player and producer Craig Potter sampled a selection of drummers and created his own drum-loops for Little Fictions rather than drafting in a super-sub to replace Jupp. It is surprising therefore how drum-heavy Little Fictions is. It would have been easy for Craig Potter to simply bury the drums in the mix or use a replacement without too much of a song-and-dance but instead Potter has stripped back the bands sound, made the drums a focal point and given the rhythm section at least, something of a hip-hop feel in parts.

The touching opener, Magnificent (She Says), written while Garvey was on honeymoon in Sardinia, is followed by the bands next single Gentle Storm and almost like the songs title suggests, it holds both a groove and a tranquillity at its core.

Mark Potters guitar rarely comes to fore on Little Fictions but when it does on All Disco, his shimmering, pedal-tone riff is a welcoming noise which gives All Disco an uplifting, smile inducing feel and leaves you wondering, ‘Is this Elbow’s most uplifting album to date?’

The mix of drums, piano and very little else appears again on Firebrand and Angel and as Garvey delivers the unusual line, “Fella interstellar” one wonders if he’s had a quick peek in Alex Turner’s notebook; so Turner-esque is the delivery. That aside, one aspect of Firebrand And Angel that is all Garvey’s is his vocal delivery and as he grippingly reaches his upper register on Firebrand, it becomes clear that the UK has not produced many voices as distinctive and pure as Garvey’s in the last 20 years.

Described by Garvey as ‘being inspired by violence and negativity’, the strangely hypnotic K2 delivers the best lyrics on the album and if Alex Turner may have been channelled on Firebrand and Angel, then it’s just as likely that John Cooper Clarke has been channelled on K2.  “I’m from a land with an island status, makes us think that everyone hates us, maybe darling they do, but they haven’t met you” and as K2 carries on, “It’s full of blood, snot and teeth and the glory of no one” it becomes clear that this is by far the moodiest song on the album until, in true Elbow style, an element of hope is thrown in, “Yes I’m given to believing in love” Garvey croons and this, more than anything else, seems to be the crux of Little Fictions.  Yes, everything is a bit shit in the UK in 2017 but there should always be that element of hope to hold onto.

Elbow’s seventh studio album is not without its faults however and although the criticism is minor, Head for Supplies, as tranquil and soothing as it may be, does works less well in comparison to the rest of the album while Montparnasse suffers from being all too brief.  That aside, Little Fictions is the most beautiful album Elbow have made in years.

The albums title track segues into Kindling with a brief White Album style three-note-noodle to form a twelve-minute-and-forty-one-seconds ending. Do not fear though, the segue doesn’t grate, it isn’t free jazz and it isn’t repetitive.  The drums could belong to both The Velvet Underground and Massive Attack at the same time but the feeling is essentially that of a British kitchen sink drama.  This is without doubt the albums centre piece.  The strings are scratchy, the guitar off-kilter, it’s all intriguingly messy but with Garvey’s voice soaring at the centre it somehow works beautifully.

“The papers upside down, the radio’s in Chinese” Garvey laments during the title track as though he’s in some sort of bizarre cross between ‘Saturday Night And Sunday Morning’ and Jonathan Miller’s version of Alice In Wonderland but then, as the beautiful Kindling kicks in we hear what must be the most heart-warming set of lyrics ever written about a cramped train and a mobile phone.  “Fifty souls to a carriage, I’m trying hard to be ignored, then my telephone shakes into life and I see your name, and the wheat fields explode into gold either side of the train.”

A lovely guitar figure, a hint of band chat and it’s over.

Little Fictions on the whole, is enthralling and uplifting, spacious and bare, moving and life affirming. Sixteen years since their debut album and Elbow still haven’t made a bad one.  Losing a member after twenty-five-years could have signalled a stumble along their journey but instead they have managed to face Jupp’s departure head on. Somehow Elbow just never seem to fail.