Well actually, he can.

The support acts were disappointing. Put off by poor weather, the turn out for Willly Mason was low and Lianne Las Havas failed to fully embrace such a large crowd. Having witnessed excellent sets from Cherry Ghost supporting Doves, the performance at Live From Jodrell Bank was frankly dull and confirms their status as “support act to better bands”. Field Music were hardly indistinguishable from the music played between acts and the highlight of the special guests by far was Dr Tim O’Brien who provided infotainment of the first order and a great live link up to Dave in Chile, cue much amusing “Daaaaaaave, you’re my wife now Dave” cries in response to his innocent “Hello Dave”.

Blame for the lack lustre support though has to fall to a great extent to the organisers. If you want to set up an event for a family day out in Cheshire at a much loved tourist attraction, stop being such tight bastards and let people bring a few sarnies. Learn from this promoters or alienate the good tempered music fans and replace them with drunken louts who don’t care, will smuggle spirits in and fuck up the day for all.

A great array of foods was on offer but a ridiculous, greedy, spoilsport, short sighted ban on picnics meant ridiculous queues for even the lowest quality options. When it takes over an hour to get a cup of tea, that is taking the piss. No wonder so many people didn’t focus on the support acts, they were too busy trying to survive.

As the light dimmed and the heavens opened, Elbow stepped into the fray and made everything not just ok, but amazing. Commanding the antennae to swing into position as they played High Ideals and The Bones of You, the band settled into Station Approach and the size of the arena didn’t matter. Being away from the City that spawned this song somehow makes it more intimate than even the Cathedral Show last year. Elbow sing of home and make us feel homesick as they pull at hearts and apron strings alike.

All credit to the organisers for excellent sound quality and the use of the dish of the antennae as a giant projection screen. Also all credit for a reasonable loo provision, but a top tip is provide some bog paper next time and maybe some hand sanitizer. It would have been very unhealthy to eat after using the loo, except of course that eating was nearly impossible.

No such problems for the band of course, who are well oiled. Garvey does like to go on somewhat, but that’s part of the charm. This is his crowd and they want the patter and the chat. Dropping the mike into the crowd to ask a 9 year old if she is alright, isn’t schmultzy, it’s genuine and taken as such by the 10,000 strong masses.

It doesn’t matter that Perfect Weather to Fly was more ironic than factual, the hits were in and everyone, young or old was singing along. The throng are part of the show and Elbow know this better than most. Every song, even the touching quiet of The Night Will Always win and the tricky notes of The Loneliness of a Tower Crane Driver are choral events.

The Birds and Lippy Kids are here, both are excellent with the relative quiet from the crowd from the non-singles like Mirror Ball, Scattered Black and Whites and The Birds being brought to life by a barrage of fire works and luminescence to light up the rain showers.

Closing on One Day Like This was obligatory, and if only the full day had met with the expectations of the final two hours. Elbow were stunning, perhaps the best I have ever seen them. The quality of the show, second to none. Catering, car park jams and bog paper aside, this was one day that could see you right. 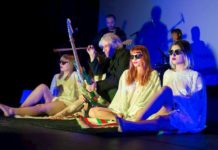 May 13, 2012
We use cookies to ensure that we give you the best experience on our website. If you continue to use this site we will assume that you are happy with it.Ok