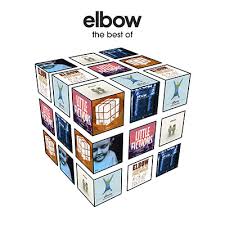 “A good way of introducing new fans to a big back catalogue,” says Guy Garvey, although the whole question of who such albums are aimed at comes under scrutiny as we pick over The Best Of Elbow.

Seven studio albums since the turn of the century, various awards and much acclaim, plus the run up to Christmas. It can only mean one thing. A handpicked selection that “took ages to decide what should go on but we got there in the end. We are really proud of this, it’s full of memories” which is fair comment.

Yet what we have is a pretty reliable and safe selection – as they say, there are as yet undiscovered tribes in the Amazonian rainforest will have been able to predict  the majority of the tracks on this set while their neighbours in the next village will be accustomed to beginning their day by throwing those curtains wide and spending their Mondays drinking with the seldom seen kid. The Manchester lads and their label have come up with a product that provides the safe and uncontroversial that sits incongruously with fellow Mancunian spokesman Morrissey who continues to court controversy  by ploughing a furrow that increasingly drags him deeper and deeper into alienation. Guy Garvey and his merry men offer a much more innocuous and warmer respite.

Long term fans might argue their corner that the early days were best. “Buy the first three albums!” comes the cry from the Elbow elitists who’ve grown with the band but feel that anything since hasn’t held a candle to them in creativity and direction. Granted, they did dare to dream and build a rocket (boys) in those early days and certainly worked their ticket.

Fans who’ve come on board since the Mercury and BRIT awards, the high profile Olympic appearance and countless festival headlines and tours, have seen Elbow soar into the heady stratosphere populated by only  the country’s most beloved musical acts. Everyone loved them when they were happening, but once you’ve happened it’s not quite so much fun (Slow Readers Club take note) and we do like to build ‘em up and knock ‘em down.

So there’s an album here for any new fans, should there be any who’ve been distracted by their desert island duties over the past twenty years; one that emphasises the familiar Elbow cordiality yet one that overlooks the chance to add a tempter or two for the fans who are well versed with all the material already. Compare say with Frank Turner’s current Songbook album (see what he did there to avoid the Greatest Hits tag? )which is perhaps the best head to head comparison; an album that includes for those who would wish it, a disc of 2017 acoustic versions specially done for the set.

Everyone has their own opinion and “why wasn’t (insert name of your favourite song glaringly omitted) included?” For the record, the absence of the space rocking The Take Off And Landing Of Everything which grew into a monumental live epic during their Apollo Landings of 2015 might be one such gaff. And then there’s the lack of anything that’s a  bit more off the beaten track; snippets of  live material (there are plenty of broadcast from festivals and London/Manchester Apollo), shedloads of session material could have been harvested and of course, the occasional non album stuff the likes of which appeared on Dead At The Back like the Lost Worker Bee EP songs. But perhaps that’s being archived up for the box set…

What is there that isn’t going to resign this ‘best of’  to the bargain bins and “can I interest you in any of these?” counter offers that come  for £3 with any purchase. Granted, you’ll get the version of Kindling that features John Grant but that’s only if you  shell out for the 2 disc deluxe version and while we’re having a pop, oh dear, fans have already been moaning at the lack of a vinyl option which may have encouraged the new record buyers into a purchase. Truthfully, the fans who’ve followed Elbow’s every move from the clubs aren’t going to buy this, although perhaps there are still those rabid enough to have to have everything. Yes, you get The Beatles’ Golden Slumbers that probably financially justified doing it for  the Christmas market and again, why not? Maybe it will become the go to album as the soundtrack for when you put up your tree; a plausible alternative to Wizzard, Slade, Elton, Jona et al whose immortality is assured.

At the core of Elbow though is Guy Garvey who has the last word on the ability to tap straight into the vein of the Elbow demographic; little gems like the ‘BMX apothecary’ and the ‘cigarette senate’ are triggers created by a craftsman in expressing lost and lonely lullabies, declarations of love and observations from the top deck of a double decker. There are some mega tracks in their catalogue: Scattered Black And Whites, the Manchester mantra of Station Approach, Lippy Kids and My Sad Captains spring to mind as examples of Elbow at their lyrical finest and peak of subtle musical simplicity.

Recent times have seen them see sawing between theatre tours that have taken them back into the sort of venues which they really belong alongside playing to the masses in the Summer fields. Guy talked about the Manchester Apollo being the best music venue  in the world, but he might just say that to all the girls, but Elbow are back in the enormodomes next year

Touring the UK in March of 2018, all dates are as follows

You can listen to Scattered Black And Whites here: