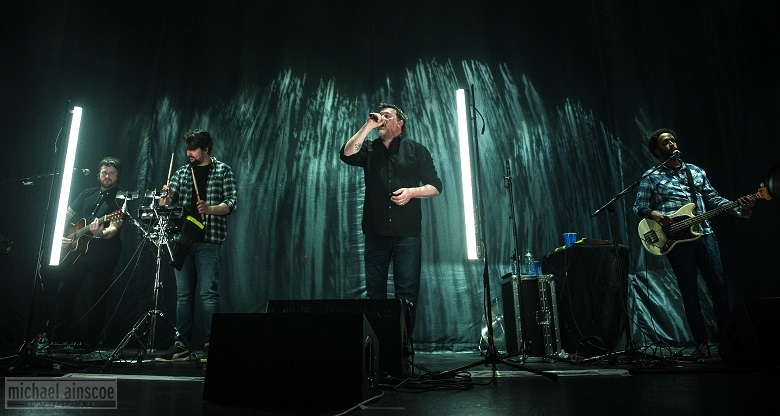 Mike Ainscoe checks out the first of a run of four homecoming gigs as the Elbow love affair with Manchester Apollo continues to run its course. They may possibly be reaching  national treasure status as their early days edge has developed into a more friendly and mainstream direction, but as the song says, it’s really all disco.

Their return to the theatres a couple of years back with the Apollo landings in Manchester and London, might have been the catalyst for bringing their arena filling tour explorations back to a more manageable level, but Elbow at the Apollo is a perfect fit. Expanding into a tour which filled similar styled, not quite what you’d call intimate, but cosier venues was the natural conclusion. 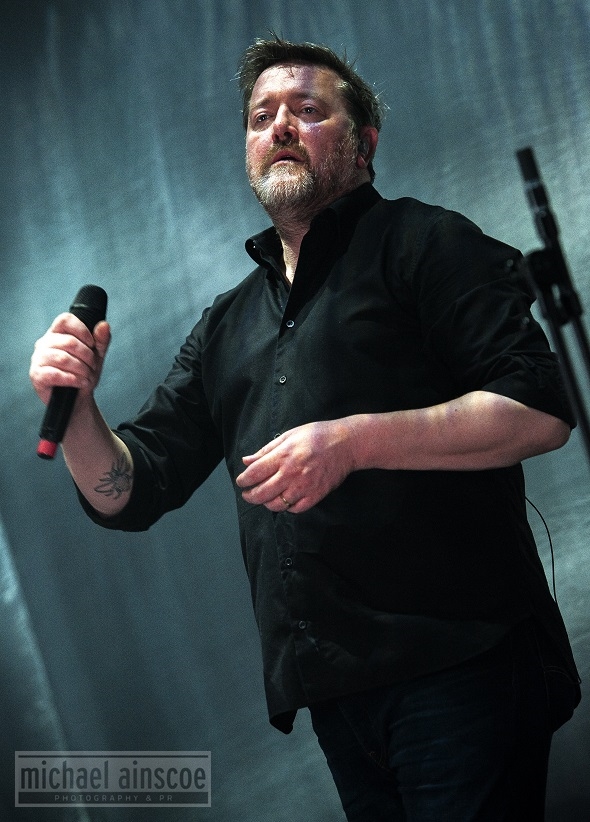 It even  extends to opening the set very much in a ‘welcome back’ fashion as the remaining four line up across the front of the stage in their latest incarnation – drummer Richard Jupp’s departure giving the boys a chance to regroup as a more slimmed down version. An intimate opening indeed in delivering a restrained Gentle Storm before the curtain drop to reveal their full stage, new recruit Alex Reeves tucked away at the side of the stage and replacing  the usual string section, two women providing backing vocal and a more subtle string support. Almost back to basics you could say.

Showcasing new songs from the Little Fictions album, a handful  find themselves welcomed like the proverbial old friends rather than crowbarred awkwardly to sit alongside the tried and trusted. In  Lunette, there’s an early declaration that we’re all “in excellent company”,   growing old together and sharing in a communal spirit at the hands of our convivial host. There’s not too much to be said about Guy Garvey that hasn’t been in print before; he’s had it all  from  the gentle uncle to  the genial sociology lecturer, yet the fact remains that he continues to create  and craft collections  of words which stroke and caress the  emotion sensors, while  warmly conducting proceedings. He almost loses himself in a Bono-ism when he expounds on his vision of Manchester becoming the first city to solve the homeless problem before he reins himself in and gets back to doing what he does best. Usually involving saying “cheers Manchester” and invoking plenty of swaying arm waving moments and half empty/half full pint pots held aloft.

Plenty of moments too for the couples in attendance to have a hug and cuddle with the late set pairing of My Sad Captains and Kindling – although one or the other has alternated in a suitably placed  encore slot on the tour. Both hit the emotion detector peaks; the former lamenting days gone by with its last post brass replaced by the strings,  the latter with its heart swell  of a Johnny Cash Americana country strum, just another of the many love songs written about or for their beloved city. 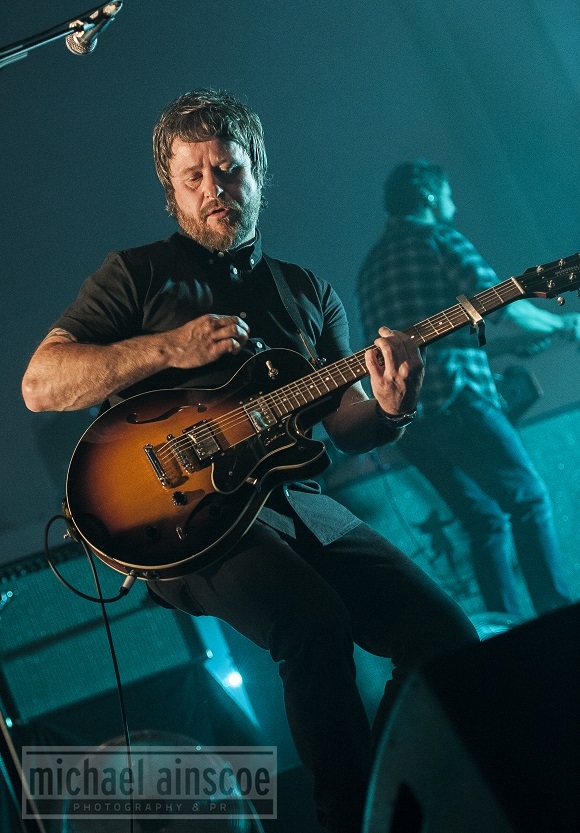 Adding to the communal quality, there are  inevitable  greetings to  the clutch of family and friends – the Potters are well represented and we learn it’s Nancy’s first gig and young Ruben has won a prize at Ramsbottom Music Festival that afternoon for his guitar work. It just runs short of getting out the holiday snaps. Talking of which, it’s maybe the throwback to their first album with Scattered Black And Whites, whose subdued hymnal presence  paints a picture of snapshots of memories of family life, that provides a low key highlight of the evening. It’s also a  moment which brings back memories of the  Jodrell Bank gig of 2012  when the tumbling piano notes of the coda were  accompanied by an impressive firework display in the drizzle. G Some may turn to the inevitable One Day Like This anthem, which has been good to Elbow, no denying, yet there are more than enough contenders in the catalogue to challenge it’s status when the time comes to rest the old warhorse.

And so when Mr G pronounces the Apollo as the best venue in the best city for music and the crowd respond as one, it’s hard to find fault. Especially when his band are packing out four nights. Of course it would be remiss to deny that one day like this a year would see us right, but another victorious residency seems set to go on record.