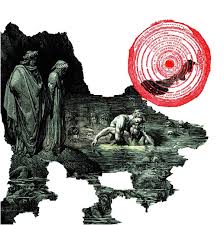 Ela Orleans’ seventh album under her own name is a deep and intense trip into the abyss. Simon Tucker reviews:

Summer? What summer? We seem to be stuck in an endless cycle of bad weather and even worse news these days punctuated by the odd burst of false-hope inducing sunshine. Times they are most certainly a changing and with Circles of Upper and Lower Hell, Ela Orleans has provided the perfect soundtrack. This album is one that requires some private time where you can let it wash over you with no distractions. Full commitment to the experience is required. Turn off the phone and close the curtains and let it surround you.

With twenty five tracks, Circles of Upper and Lower Hell is not frivolous or throwaway. It is a deep and rich work that has not traces of fat or of overreaching. Orleans manages to capture your imagination right from the off with ‘The Gate’ and from then on in you are in her world, a world rich with reference and symbolism, of esoteric pop and noir disco, of confidence and vulnerability.

Throughout the album Orleans herself is a spectral presence with her vocals often skirting in the background acting as a detached but vital textural tool. When vocals do take center stage it is a wonderful experience, like on You Go Through Me which features vocal performances by Stephen and Katrina from The Pastels. Lyrically we are not handed subject matter on a plate with Orleans leaving much room for us to make up our own interpretations. Imagery is seeped in deep classicist literature yet you get a deep sense that this album is incredibly personal for its author revealing much of her self whilst never explicitly giving the game away.

The production on the album is wonderful as the whole record is dense and all encompassing whilst never shying away from nuance or melody especially as we spiral towards the latter half of the album which is where the real dark heart lies.

Circles of Upper and Lower Hell is a fantastic album that should draw more people into Orleans’ orbit. Ela has been steadily creating better and better works and with this she has made her first masterpiece. Wonderful.

Listen to Ghosts And Whispers from the album here: