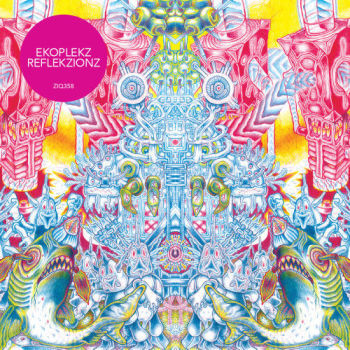 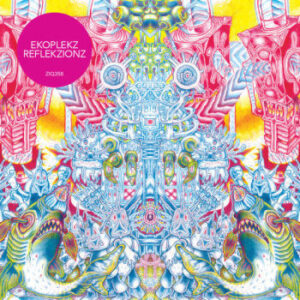 It could be the hours approaching dawn in a perfect world. You may find yourself wearily driving down a lost ring road surrounded by green pastures and startled cud-chewers wishing to find yourself transported back several hours, or maybe years or even decades. Time corrodes everything, including memories dredged forth in reminiscence of halcyon days.

That increasingly seems to be the mind state where certain strains of UK electronica currently find themselves, locked into the unspooled coils of a C90 cassette found on the floor of a battered family car once used for more hedonistic pleasures than ferrying around the relatives or undertaking the teethgrinding commute.

There was nostalgia for happier carefree times twenty years ago when the likes of Aphex Twin and Boards of Canada nodded back to more innocent make-believe realities, rose-tinted memories of possible events which with 2015’s added perspective took place mere months earlier. Now, with his third LP for Planet Mu, Ekoplekz’s Nick Edwards is set on bathing in a nostalgia bubblebath perfect for the jaded Rave Mum or Dad wondering how it came to this.

Much of Reflekzionz sounds like it could have existed in original form twenty years ago, aching with bucolic wide-eyed wonder and golden-hued youthful hope. Only the tapes have been buried deep under piles of stoor and ash, the debris of 1995-vintage technology now reduced to useless rubble with no hope of reaching any kind of storage cloud that doesn’t resemble a skip.

Tracks like “A Caustic Romance” and “Seduktion” come complete with clanking, chunky beats married to melodic meshes buried under multiple layers of eroded surface patination. “Repeater (How Did It Feel?)” and the evocatively named “Midnight Cliffs” twirl around themselves in states of blinking dismay after pulling a first allnighter in so many years and distorted breakbeat rhythms attempt self-resuscitation on “Saturation (Full Rinse)”.

“Tremulant” comes on with zapped flashbacks kicking in like sudden bursts of panic now the downers have worn off, “Dubnium 268” instantly lands you in the middle of a cresting peak beat which then suddenly gives way beneath your feet and closer “Day In May” evokes the splendour of open fields and electricity pylons seen through Super-8 film.

Perhaps it’s all escapism and wishful thinking, fond regret for lost times. But with so much contemporary urban UK electronica welded to harsh beat mechanisms and drizzly grey static in reflection of the true dystopian horror of 21st century life that’s appeared so bewilderingly quickly, what’s to say that a life lived in a hazy unreal nostalgia isn’t a life lived well? The past, always so welcoming, is everything you want it to be.

Ekoplekz can be found online at www.planet.mu/artists/ekoplekz and on Facebook

All words by Euan Andrews.  More reviews by Euan can be found at his author’s archive.