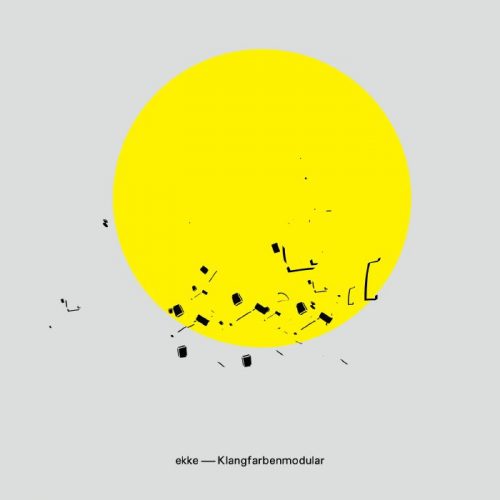 Tallinn’s Ekke Västrik is a singular artist. A wizard to watch live (deftly mixing his analogue sound using a myriad of plugs, wires and whatnot; to all intents and purposes looking like he’s performing surgery on a dying car battery) his unassuming manner has maybe stood in the way of his music. Regardless, this new solo LP from Ekke, Klangfarbenmodular really deserves your time and attention.

Like most of his music (whether solo or with Ensemble U), Ekke’s new record is a brilliantly subtle, suggestive work, but something that needs a few listens before you start to pick up on its inner grooves. The listener needs to work on it. Maybe the sound is more obtuse, more abstract than his last LP, Chasm, which contained some strong poppy passages among all the micro beats and analogue synth sounds. But Ekke remains a master of atmosphere and suggestion. And in some ways (certainly in terms of making a record that feels like one extended piece, or a record that has one message, or driving impetus, overall) this is a real step up.

Ekke’s music always plays on tension between an inner, studio world he imagines and the elemental outer world he draws on. That is seen in the opening two tracks on Klangfarbenmodular. The opener ‘Imitatasioonid’ is a lovely, electronic chamber music that feels hermetically sealed, a gift never unwrapped. The cut is also insistent in nature; its tautness and spikiness suggesting something slightly weird at play. Following that is a more expansive piece, ‘Matter’, a brooding essay that highlights the more expressive, “outdoorsy” side of his nature – the music patiently building up a widescreen view of some windswept, godforsaken landmass seen only by an inner eye. By contrast, ‘Nukud Ja Tootemind’ is a quiet, music box meditation and a perfect ear cleaner for side one’s brilliant closer, ‘Rähn’. ‘Rähn’ is a truly brilliant soundscape, throwing up memories of early Krautrock and 90’s Aphex Twin alike. (There is a funny, squidgy passage mid-track when the whole thing falls to pieces, something is very reminiscent of Organisation-era Hütter and Schneider, watch out!)  The cut ends on a very appealing set of bloops transmitting (in my imagination at least)  into outer space from the radio tower in Tallinn’s botanical gardens, looking for a connecting signal from “somewhere else”.

The opener to side two (and title track) is a brilliant essay in nothingness. A shifting wash of suggestive tones, subliminal beats and electronic hooks drive it; the melodic structures dissolving like snow before they have time to leave a mark. The overall impression is of walking through an indeterminate landscape, one whose character is prey to the elements that affect it. That the piece ends quietly is no surprise. Following on, we experience a long and very quiet build up followed by ‘Varishape’, an electronic meditation which could be classic Warp, and a track that also seems to draw on Edgar Froese by its end. ‘Contact With Tallinn’ is a bravura piece of glitch-drone that borders on musique concrète; the monoglot buzz and growl of electronic noise punctured now and again by a what sounds like a muffled gong (or someone letting a lead pipe drop on a carpet). Despite its essential minimalism the headspace is huge here, maybe echoing the track’s title in spirit. And more proof that Ekke is a master at underpinning tessellate sounds and squiggles against a simple melody. That knack is seen on the last track, ‘Feedback Loop’; a pleasant distraction build on a snaky modular loop.

This is a record you may miss but if you pay enough attention it’s one you could very easily lose yourself in. If you do decide to give it a whirl, I really recommend you get this LP on vinyl, as the act of flipping it over and listening to each side somehow brings his music – and what drives it – into focus. You won’t be disappointed.