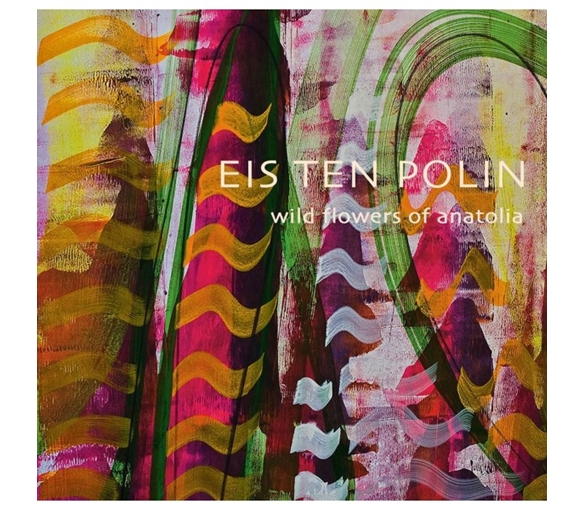 I like records that “don’t fit”, that can’t be explained easily. And Wild Flowers Of Anatolia the LP by Istanbul-based trio, Eis Ten Polin is one of them. I’ve had this record the best part of a year and still have no real idea how to describe it. I’ve listened to it loads during this time, appreciating that there is a lot going on, but also aware that there is a poppy simplicity and directness to it that could make an attempt at a detailed “socio-political” or “contextual” review sound pompous and off-putting.

It’s worth saying from the off that Wild Flowers Of Anatolia is a meandering but glorious record, chronicling the band’s own (personal) thoughts on the socio-political situation in Turkey. “The personal” is the key. Though it has a strong message (however much I don’t fully comprehend it) the record is ultimately impervious to anything but its own heartbeat; especially when Baba Zula’s Mura Ertel starts laying down the law. Which just makes it great to listen to, as music. Still, given the record was recorded in 2015, and in the light of recent events in Turkey, you can’t escape that large chunks of this record feel somewhat prophetic.

Even the packaging gives an indication of the heavy trip to come. We get two CDs, one named Smyrna, the other Salonica, both clocking in round the hour mark and encased in a sturdy CD book; replete with a fine set of notes boasting a whole sheaf of lyrics in Turkish and English. For those of a studious bent the CD pack gives plenty of brainfood to digest, or, for those of a more hedonistic mood, to skin up on.

To give the record some further context for our jaded Western palettes, this is also the work of Nick Hobbs (here going under the name of Nikolai Galen) once of ace band The Shrubbs (another band who worked with Dolf Lanteijdt, of Koeienverhuurbedrijf studio fame). Wild Flowers... does have some similarities with their bouncing, jalopy beats and goggle eyed vox on their 1987 LP, Take Me Aside For A Midnight Harangue.

Back to the music. This record can be ingested in two ways. Firstly, you can let it all wash over you in a stupor in one sitting and then try to chart a course back to everyday time. Which is a great way to listen if you are in the mood to get onto a different psychic-spiritual plane. The second is to really pay some attention to the text in the booklet whilst digging the meandering, arabesque structures. Watch out for some arresting lyrics and clauses floating out of this stew. There are far too many to single out, but “blood-written get out clause” is one and “trails of scandals writhe like snakes / stuffed into bags and left behind the gates” is another. I’m not sure and certainly no expert, but these musical and vocal extemporisations feel like an attempt to throw elements of Turkish classical and chamber folk into a modern context (courtesy of the Baba Zula connection) and wild-eyed ur-hippy meanderings (a sort of Pinkwind/Gong/Fairport/Soft Boys jam) onto a canvas and see what sticks. The socio-political elements come on a bit like Julian Cope’s mid 2000’s groovier,more meandering releases; stuff like Rome Wasn’t Burned In A Day, or You Gotta Problem With Me? Or, more esoterically, Amon Düül kicking out the jams on Yeti Meets Yogi (imagine the taproom jam that would have spawned that particular Kraut monster). Overall there is some fabulous playing; and things get very raga as the tessellate, crystalline sounds spiral upwards into the firmament and underpin the frenzied vocal digressions. I really dig the coughing fit in the strung out rocker, Sulukule. Nick Hobbs probably means to cough but you know what I mean…

Well worth hunting down, this record. Just ensure you have the time to let it all soak in.