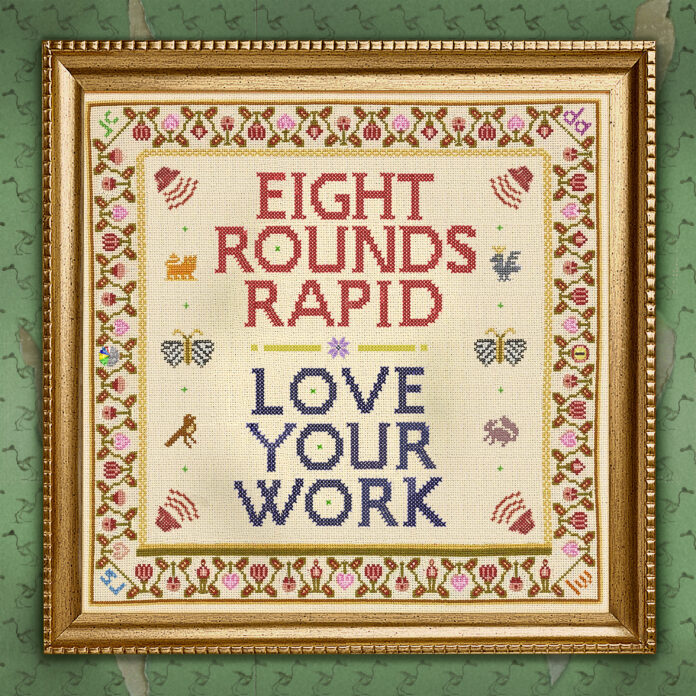 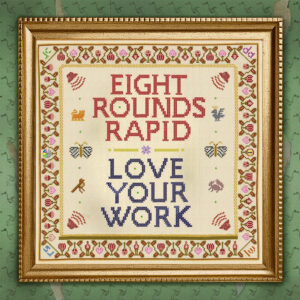 Time to stop talking about them as being ‘the band with Wilko Johnsons son on guitar’ and ‘rooted in the infamous Canvey Island R’n’B tradition’. The third album from Southend art-school post-punks is a thoroughly modern album, full of obsessive compulsive disorder and dark comedy. Or as they say:  Music as duty. Love your work.

Eight Rounds Rapid are a funny band.  Not laugh-out-loud, funny-peculiar.

They are also, one of the most interesting and unique bands in the country.  Musically intuitive, talented but not flash, rootsy but modern and with a brilliant, unusual lyricist and vocalist.

I’m a latecomer to Eight Rounds Rapid. Only when I saw them live did I ‘get it’.  Musicianship, dynamics and serious intent. And a vocalist with a stage presence somewhere between Jack Dee and Ian Curtis. Deadpan but intense.

They look old-school maybe but are a further-education in a brand new subject. Rhythm and Bruise. A new kind of Art-Punk. The art of survival and self-expression -using the local vernacular and musical muscle to back it up.

Each member is as important as the others, like it should be with a band. A proper unit.

I asked to review this, their third album. Listened to it once and immediately bought the previous two. All of them are sharp, funny and faultless. The playing is tight, disciplined. The songs: odd, original, strange and comic. Existential parables and artful wordplay. The delivery is everything but to me, the lyrics stand as brutal poetry.  To their writer they are only there as part & parcel of the song; words & music inextricably bound.

Some songs are like a gritty TV drama series has been turned into a haiku.  Others are like a sardonic comedy sketch have been made into a song.  One is like eavesdropping an argument on a bus – with guitars.

‘Love Your Work’ reflects feelings of confusion, angst and isolation – all delivered with singer David Alexander’s trademark sneering dry wit. The customary low life and underground subjects are still the only language they know, but this album is as much a commentary on contemporary music confronting modernity as it is a collection of musical compositions.

The band would probably say Love Your Work is their best work.  They have never recorded a bad song though. They have been pretty much perfect from Day One. But they have moved forwards. Love Your Work is probably their smartest, sharpest and most varied. You think you can hear a dozen influences: -Feelgoods, PIL, Void-oids, Blur, Godfathers, Wire, Sleaford Mods, Syd Barrett, ATV, the Fall… but in fact, they sound like no other band at all.  Nine years on since conception they sound like Eight Rounds Rapid alone.

Some people just won’t like them at all. They are an acquired taste perhaps, like Marmite. The stumbling block will be Dave Alexanders voice.  He’s a vocal stylist like Sinatra, He aint no Pavarotti. Nor is he Mark E or Mark P from Alternative TV, though he does sound a bit like the latter. If you let his voice put you off listening then it’s your loss.

Eight Rounds Rapid have a punk-rock energy without being a punk rock band and like any decent album the first three songs, ( 1. You Wait 2. Passive Aggressive 3. Love Don’t) are the fastest, most immediate ones on the LP and just smack you in the face: blam blam blam and you’re hooked.

Passive Aggressive has a piece of dialogue acted out over the last thirty seconds of frantic music. An argument over money which culminates in the beautifully enunciated ‘you slimy little prick’.  I’ve waited a lifetime to hear that expression in a song.

Letter is a bizarrely emotional song despite the fact you have no idea what it is actually about other than disconnection between two people.

Onesie with its sax is like a brilliantly sarcastic X-Ray Spex meets James Chance & the Contortions.

The aforementioned Retro Band and Ageing Athlete have a great submerged, coming up for air, dub-type production and shows the band are thinking not just in terms of replicating a ‘live’ sound any more.

Mirror has a strange echo of Bowie’s Scary Monsters…

There is not a single song which won’t get you thinking, laughing or dancing on Love Your Work. It’s one of my favourite albums of the year… which means fuck-all really. People like to make up their own mind and don’t pay attention to self-appointed critics.  Sleaford Mods, IDLES, Fontaines DC  – great bands, but who get non-stop ‘critical acclaim’ are loved and loathed in equal measure by opposing factions -simply because of pre-conceptions of fakery, hype and middle-classishness… There is none of that here.

Eight Rounds Rapid are the real-deal. Music made out of necessity. I love their work. It’s drama, humour, anger, precision and character.  Fire and skill.  Words and music. Life and death. Here and now. Ten out of Ten.  You slimy little prick.

All words by Ged Babey.   Press release quotes and song lyrics in italics.

An interview with Dave Alexander, singer and lyric-writer with the band will be online soon.