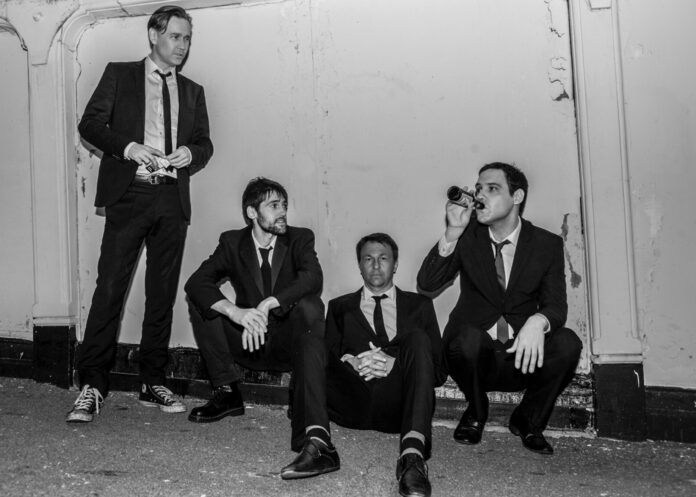 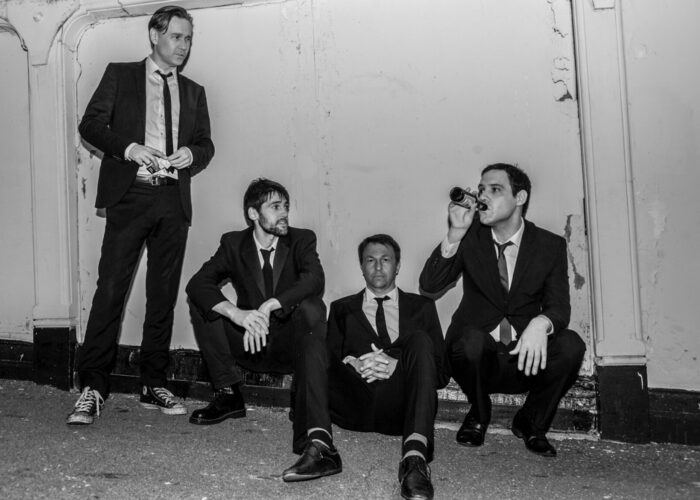 Eight Rounds Rapid are one of the most fascinating guitar bands in the country… and have been for some years.  They should be as talked-about as IDLES and Fontaines D.C.  Their first album Lossleader came out in 2013 (LTW review), the second, Objet D’art, 2016 and 2020 sees the release of Love Your Work on Tapete Records (LTW review).  Ged Babey talks to singer Dave Alexander about his words and the music.

We are more the fork in the road not travelled, and if we weren’t we wouldn’t continue. That is the difference. Make music with extreme caution or don’t make it at all. There is already enough of it.

You probably have heard of Eight Rounds Rapid even if you are not already a committed fan.  Oh, the band with Wilko Johnson’s son on guitar.. yeah, yeah, yeah.

What people should be saying is:  that brilliant band with one of the most individualistic lyricists in the country. The singer is weird. really intense, just sings, his right leg going…

Just take it as read that musically they are shit-hot. They play rhythm & blues ‘post-punk’ rock. They get compared to Dr Feelgood. (early) Wire and Public Image but play with a straight-faced intensity few bands have nowadays.

I wanted to talk to the ‘wordsmith’ from the band as i find his lyrics intriguing.  Brilliant. Funny. Sharp. Puzzling. Nasty. Weird. Clever.  I think he is a poet. But maybe it’s all in the delivery and how they gel with the music….

Dave Alexander seems as earnest a character in conversation as he does onstage.  I wanted to go back to the very beginnings of his creativity (he says pretentiously)…

What’s the first poem or song you can remember liking at say, 5 years old?
I remember poems sounding a bit twee to me. Kids were conditioned to have respect for things and so you did. Felt like religion in that way. I always liked Jerusalem though with the music, so I suppose I liked William Blake.

Did you like poetry at school? Or were you more into limericks and tall tales?
I liked poetry, but there was no room for it where I went to school. I liked Pam Ayres, but that was as much for her voice. I liked songs with stories and songs that inferred something. I got really obsessed with things, then really bored.

Did you like writing stories? – in my day it was called ‘composition’ – you’d have a choice of titles and have to do some creative writing – I always nicked ideas from TV and comics.
I really did. I wrote one when I was 11 about Scott of the Antarctic. I then started to become more interested in pictures and never really wrote anything till later. I thought I could probably write but no one said so at the Secondary Modern, so I stopped.

When did you start writing songs and think, I can do this….
I was happy listening to other people’s music until I met with some old Art School friends who were musical. I was trying to learn guitar so we went to the local rehearsal rooms. I liked it but no one wanted to sing. Because there was a decent guitarist there already I said I should try at least. What came out of my mouth was unexpected and made an impression. I was fortunate that I had the right people around me who didn’t dismiss it.

When I eventually bought a notepad, our noise helped to steer the word count somewhere and then I found my angle. That was the key to anything that came after.

You seem a reluctant frontman…
I am.  We turn up, we play and we leave. In terms of my performance, what more do people want?  I’m only there because I think we are better than any other band you’re likely to see. If I thought we were mediocre I wouldn’t do it. Most singers are there for their ego and to ham up their favourite bands. They’ve read the idiot’s guide to stagecraft. I don’t have any interest in that. I’m reluctant to be seen as a front man in that sense. Why do types want to keep seeing the thing that reminds them of another thing?  Am I missing the point?

You sound a bit like Mark Perry from ATV – how many times have you heard that?
I am usually told that by people who have great affection for him so I am always awkwardly flattered. Punk was before my time and we are not revivalists. I can only do what I can do so any resemblances are purely coincidental.

Punk is another lazy association we have to endure. We are more the fork in the road not travelled, and if we weren’t we wouldn’t continue. That is the difference. Make music with extreme caution or don’t make it at all. There is already enough of it.

What are you aiming for when you write – to tell a story or make a point or just get something out of your system?
I think there is something of me in what I write, which makes it harder at times because I have to be excited by something for it to work. I’ve got thousands of pages. They all remain half finished. If we start playing music in a certain way that might complete it. One of the tracks on the new record is eight years old. I am always in search of that thing. Sometimes you find it.

Which is the song you’ve written you are most proud of?
I see them all as a collection. Some come quick and they can be best but not always. We don’t write the same song twice. If we reach a point where we repeat ourselves or worry about how we might translate we shall stop. I’m only excited about what comes next. We haven’t finished.

Current bands – What do you think of Sleaford Mods and IDLES ? or who else do you rate?
I wouldn’t comment on other groups generally because I don’t know them well enough. I would say I like aspects of both of those. I’ve seen Sleaford Mods before. Jason’s voice is good. I saw Shame a couple of summers ago and they seemed honest. Going to see The Fall was as close as it ever got though.

‘Southend wannabe gangster’ type characters seem to populate some of your songs – according to the press you’ve had – is that really the case?
Some of the stories are inhabited by a certain kind of character. If I knew any hedge fund managers I might stick one in but as yet I don’t. I would be keen to dispel any myths we are tourists. I for one have been assaulted this year, I’ve had my car vandalised and someone stole all my records – all of them. I’ve lived in the East End, I’ve lived in Neasden, tougher places. I know people. We are not a guitar landfill bed-wetting band. What we do has come about slowly. It’s not metropolitan or privileged. I think our music is as eclectic in its scope as it could be, and other people should have worked that out. If we sound provincial to the middle classes and the gap-year music press, then so be it. This is probably not for them to be honest.

You know when bands play live and the singer introduces a song with the words ‘This Ones About…’ – does that irritate you? It does me. Just listen and work it out yourself For fuck sake…
We’re not into “end of the pier” entertainment. I want to experience something stranger. Most groups play with a very straight bat. Fine – but I don’t want the illusion that there is more going on burst by their banter. Yeah I hate it. Sometimes I do a monosyllabic, unintelligible “banter” to take the piss.

That said, could you just tell about the first four songs on the new album  – what they ‘about’?

I like the ambiguity of our wonderful English language. Everything means something else. Not having a good education means I am blessed with ignorance so I shall not fully articulate this but I have been able to explore what things mean in my own way. You Wait is about waiting and it’s also an idle threat, and having conversations with ourselves is as tragic as it gets. No one listens, no one cares and no one is ever to blame.

Should the Love song be officially cancelled having exhausted the potential variants of a not very interesting in the first place scenario? Wait, I’ve got some more ideas.

I acted it out and made it sound like a 1930’s or 40’s film song. I couldn’t find a sample I liked. I hope this does not disappoint you. Letters are beautiful aren’t they? We don’t write them no more. I used to write to people all the time and you learn through doing it. You can get everything right. I have my ideas about what would be in this letter, but that is a tale for another time.

Thanks Dave. Love Your Work.

Band portrait by Paul Hughes (Dave is seated, looking into the camera lens)