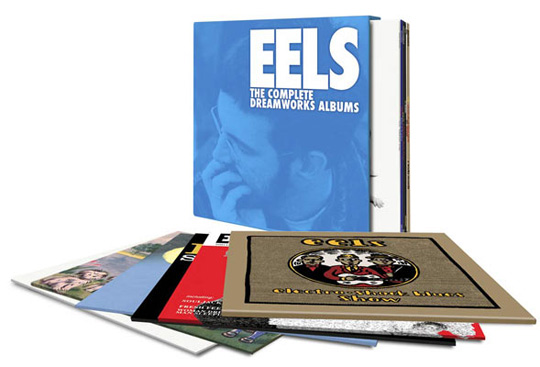 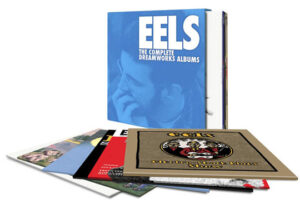 Charting the early part of an incredible career, filled with emotion and at times unnerving yet no less brilliant. Eels are one of the great bands of our generation!

There are few bands that have lasted as long as Eels, despite a variety of lineup changes Mark Oliver Everett (E) has remained at the helm for twenty years now. With eleven studio albums to their name, Eels have always had a genuine disregard for genre with each album showing a new variation of their sound. The music press, for their exceptional songs, has always lauded them and E is undoubtedly one of the greatest songwriters of a generation.

The box set covers Eels first six albums, when they were signed to the wonderful DreamWorks records. Having been one of the first bands to sign to the label, they were followed by a slew of incredible artists. Beautiful Freak was the second album release by the label, and rightly garnered critical acclaim across the board.

The beautifully melodic record is packed with what has become E’s trademark tormented lyrics, the sweetness of the melancholic pop songs cut with his caustic words. From the outset Novocaine For The Soul sets a harsh blueprint, for this exceptional debut. The album continues though with a plethora of pop gems, particularly My Beloved Monster and the wonderfully catchy Susan’s House.

As far as debuts go Beautiful Freak is up there with the best, yet this is only just the beginning. As Electro Shock Blues sees the band plummet to even darker places, with E suffering a torrid time. It reflects in the tracks, with its incredible depth and heart it’s an unnerving listen at best. Each track augmented by stark instrumentation, as saxophones squeal and the piano clashes.

Yet it is here that E’s songwriting is at its bitterest best, Cancer for the Cure Going To Your Funeral Parts 1 & 2 all stick out. Despite the issues in his life, E elevates himself to a whole new level, conveying tragedy in such a way that makes it hard to listen to and to this day it is still an exceptionally difficult album to listen to. Yet one that is so unbelievably captivating and incredible.

This box set also features for the first time on vinyl the Electro Shock Blues Show, where these dark tracks are given a whole new lease of life. Whilst they retain their sombre lyrics, the sound is given a make over from stark laments they become much more sinister and E’s passion exudes from each one. It captures the Eels live experience perfectly, with the tracks from the album of a similar name being the most compelling.

Yet tracks like Souljacker Part I, pack one hell of a punch against the darkness and despite it not being the most jovial of tracks, it relieves the pressure of the heavier elements of this record. Despite the jarring lyrics and the unnerving listening offered by their early work Eels have since become one of alternative pops most exquisite assets.

As demonstrated by the wonderful Daisies of the Galaxy, as the tempo moves up a step and the previous misery sidesteps slightly. As Eels reveal a more easy going side, the misery still plays a part but its increasingly more downbeat as jovial tracks like I Like Birds take to the fore. A song, which is still very much a live favourite to this day and crowds can be heard yelling ‘BIRDS’ wherever Eels play it.

For a band that cut their teeth on hardcore misery, Daisies of the Galaxy is a wonderful album that shows that leopards can change their spots. This bright and exciting sound, also exemplifying the bands complete disregard for genre as they treat music as sound as opposed to a specific structure developed for a scene.

As both Souljacker and Shootenanny! Go on to demonstrate this, the former being an exquisite rock album, which is heaped with wild pop sensibility. Yet still maintaining those dark and disconcerting lyrics that are filled with passion that draw you in, in ways like no one else can. Yet Shootenanny! Sees the band fusing their original unsettling lyrics with an intriguing and different sound again, it’s a roller coaster of musical mastery.

Safe to say that Eels are not a band who sit still, creating music to satisfy a personal need rather than to impress anyone else. Fortunately they managed to do both, this box set documents an incredible rise of one of the worlds most loved bands. Who still never fail to impress us to this very day, the exquisite lyrics and their intriguing sounds are what has led them to be loved the world over and rightly so.