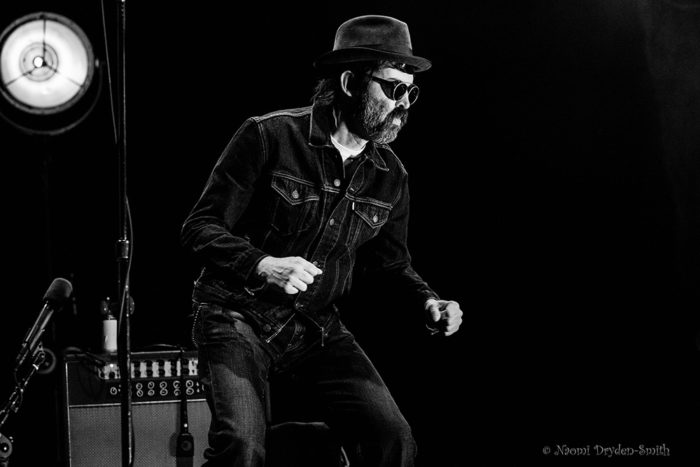 Mark ‘E’ Everett summoned his inner Roger Daltry, gave Prince a run for his money, blasted Klaxon horns and delivered more cowbell as Eels returned to London after a four year wait. Louder Than War’s Andy Duke was on hand at Brixton Academy to witness this darkly melodic quartet at their showy and brazen best.

I’ve seen many incarnations of Eels over the years. And the experiences have been so disparate in feel that I’m compelled to reference the work of Hugh Everett: the renowned physicist, and father of the group’s singer and driving force, developed the theory of parallel universes. In short, this involves how actions can and will affect the lives our different selves. Which is certainly a novel way to begin a gig review. But strangely appropriate in examining Mark Everett’s long-awaited return to the capital.

My encounters with the Virginia-born musician over the last two decades have been akin to seeing the very different parallel lives of the same person. I shall focus on two of these lives here. First, there was the detached Unabomber-styled performer who faced away from the audience for most of the gig at The Forum in 2001. With a hooded top over his head, dark shades covering his eyes and a long beard hiding his features – this was a very dark and clearly disturbed version of ‘E’. Engagement with the crowd was non-existent. And, seemingly, so was the stripped-down band’s chemistry.

Fast-forward nearly seventeen years and the star of Netflix’s ‘Love’ is a garrulous and highly energetic prospect onstage. Entertaining a sold-out crowd at Brixton Academy with a raucous band in tow, Everett is in his element and loving it. The quartet, spread across two risers, open with a cover of The Who’s Out In The Street complete with uncharacteristic Daltry-style screams from the maracas-wielding frontman. The last time I saw Eels, at The Royal Albert Hall in 2014, it was was a sedate, delicate and consistently measured affair. But this latest parallel life of ‘E’ runs the gamut from loud and brash to lush and restrained. Only two songs in, and with purple stage lights descending onto the foursome, the band launches into a sumptuous cover of Prince’s Raspberry Beret. By the song’s final bridge, Mark and guitarist Jeff ‘The Chet’ Lyster are partaking in some syncopated dancing. The late Mr Nelson would have been proud to see his track reworked with such enthusiasm, reverence and fun. And the experience feels a parallel world away from the static Unabomber gig. 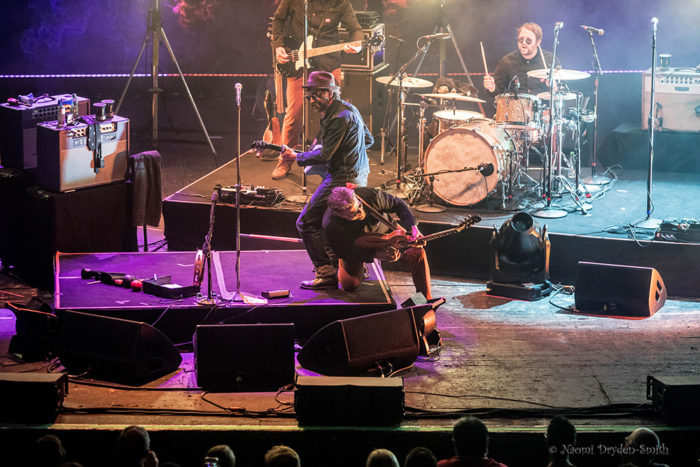 “Are you ready to soft rock?”, asks Everett to the 4,921 strong crowd. This sudden change in pace is a testament to the group’s wide dynamic range. After showcasing what ‘E’ quipped as “a lot of rock and roll for a man of my age”, Eels dial the tempo and delivery right down with A Magic World, Dirty Girl and That Look You Give That Guy. With Prizefighter, from 2009’s Hombre Lobo album, the band slowly picks up the pace as Everett’s vocals take on a quasi-Lou Reed quality. With a set of bongos delivered next to Lyster’s mic, Mark asks “mind if I jam on my new castanets?” before the ensemble tackles You Are The Shining Light from this year’s The Deconstruction album. This catchy nod to the swinging sixties wouldn’t have been out of place on Beck’s Midnite Vultures album and the song’s cheery pace inspires light banter afterwards. “Didn’t ‘The Chet’ do a great job on the bongos? Look, he’s even got a standing ovation down on the floor and seated ovation up in the balcony”. Whilst introducing the band, and providing star sign details of each member, Everett is disturbed by an unexpected arrival onstage. Jon Averns, a Livery Company representative, delivers cufflinks and a tie in commemoration of the singer’s status as an Honorary Freeman of London. This isn’t an ordinary gig and The Eels are not an ordinary band: albeit one that now has a Freeman of London in their ranks. And, for the record, Mark is an Aries, ‘The Chet’ (Guitar/Bongos/Vibraslap) a Virgo, Little Joe (Drums) a Pisces with a Virgo Rising and Big Al (Bass) is a Taurus. Following the astrological particulars of his band being examined, the group’s diminutive drummer (who was standing in for regular skin-basher Knuckles) is the subject of a charming introduction song called Little Joe which the percussionist sings with great Piscean aplomb.

Although Eels have been reluctant to add big hits like Novocaine For The Soul into their set for a number of recent tours, this ode to a well-known dental painkiller is given an arrangement makeover alongside Mr. E’s Beautiful Blues. The former, which is laden with new heavy riffs, recalls the Seattle grunge sound while the latter is made to sound like ‘The Who’ complete with Keith Moon-style drum fills a la I Can See For Miles. Despite the impressive execution of both, the new arrangements sadly detract from the charm of these much loved fan faves. Whilst I appreciate that commercially successful tracks can feel like an albatross to a band who continue to be creatively productive and relevant, these song reboots ended up being unnecessary weak points in what is an amazingly strong and varied set. Capping off the evening with two encores and another Prince cover, When You Were Mine, Everett reveals his influences in his parting comment to the enthusiastic crowd; “That was fun. Brian Wilson, Peter Townshend and Prince – thanks for making US”.

Whereas the parallel life of Mark Everett that I witnessed at The Forum back in 2001 was overwhelmed by his well-documented tragedies, this 2018 version is laughing and dancing in spite of them. Now that he is an Honorary Freeman of London, I hope that our capital will not have to wait so long for Eels to return here. 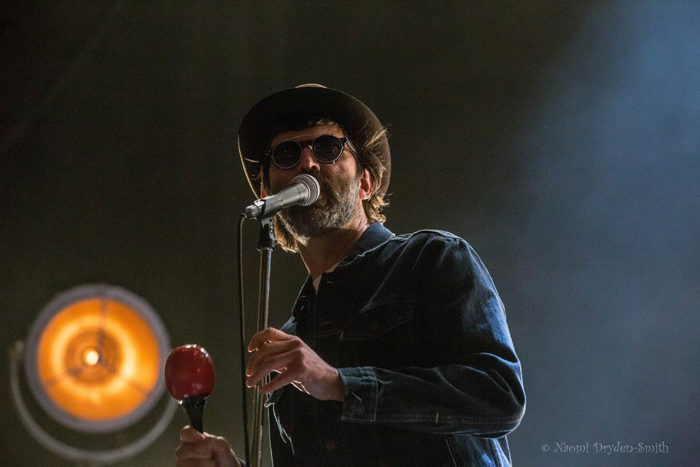 All photos © Naomi Dryden-Smith. You can find more of Naomi’s work for Louder Than War here, and she (occasionally) tweets as @nomeshome. Also on Facebook and Instagram. Naomi’s Photography portfolio can be found here