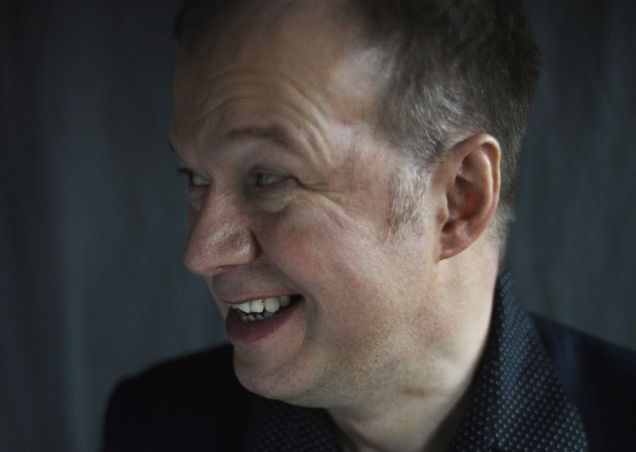 The former Orange Juice man and polymath, Edwyn Collins, is on tour at the moment. He played the Deaf Institute in Manchester last week, a show Louder Than War’s Fergal Kinney’s was also at – check out his review below.

“Music”, croons Edwyn Collins in the hymnal ‘Home Again’, was his “unholy salvation”, and in Manchester tonight an audience came to hope for very much the same thing at the feet of the ever-reluctant godfather of British indie music. They were not to be disappointed – a bulging Deaf Institute beamed as Collins made his way onstage to the chiming opening bars of ‘Falling and Laughing’ – the first track on Orange Juice’s first and most-loved album “You Can’t Hide Your Love Forever”, an album bursting with the same wonky exuberance as being properly drunk for the first time.

Indeed, tonight is a veritable treasure trove for Orange Juice fans, with a set list that gives a history of the band from their gorgeous early Postcard Records singles to the more polished and sophisticated funk of ‘Bridge’ and ‘What Presence?’. The independency pioneered and promoted by Orange Juice and Postcard would leave a bigger impact in this city than perhaps any other, a spirit that continues to this day and explains the presence of a younger demographic in the audience, many drawn by Collins’ recent work with the Cribs, Franz Ferdinand and the Heartbreaks.

“I was sad to hear about Lou Reed” explains Collins by way of an introduction to last year’s ‘Forsooth’. Whilst an obvious affectionate homage to the Velvet Underground – with not just the glockenspiel line from ‘Sunday Morning’ tucked underneath its jacket but the song’s lyrical setting too – Collins increasingly possesses a Brian Wilson wide-eyed optimism at the familiar and the domestic. It may not be as lyrically verbose as on the seething ‘Gorgeous George’ album, but it’s every bit as affecting.

Played one after the other, ‘Rip It Up’ and a storming ‘A Girl Like You’ propel the room into a temporary indie disc for the over-forties, and when Collins instructs his band – made up largely of Welsh indie band Colorama and erstwhile Sex Pistol Paul Cook – to “let it go”, they are swiftly unleashed into the fuzzy embrace of a wig-out, wholly divorced from the fey, shambling stereotypes consistently and wrongly attributed to Collins’ music. When Collins returns to the stage afterwards, it’s with guitarist Carwyn Ellis for an acoustic airing ‘One Track Mind’ and ‘Home Again’; with obvious mutual affection Ellis provides the perfect frame for Collins’ ever-powerful, ever-fragile baritone. The band re-assemble for ‘Felicity’, once covered by the Wedding Present, and a bombastic ‘Don’t Shilly Shally’ – bringing the set to a close with a life-affirming, unabashed joy present through the entirety of tonight’s set, and a spirit which it wouldn’t be too pompous to describe as “unholy salvation” indeed.

All words by Fergal Kinney. Check out more writing by Fergal at his author’s archive.