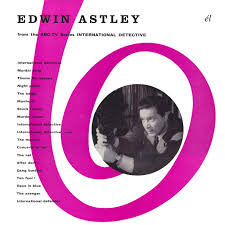 Two television crime soundtrack albums on one CD, featuring the talents of Edwin Astley (better known for his essential work for ITC Productions with the themes from “The Saint” and “Danger Man” amongst many others) and Jazz drummer Tony Crombie…..LTW’s Ian Canty encounters the world of slick spies, mysterious foreign agents and bad guys brought swiftly to justice…….

Though perhaps not names that have much in the way of currency in the world of UK music 2016, Edwin Astley and Tony Crombie played important parts in the evolution of Rock in Britain (Crombie) and the development of television sound-tracking to a fine art (Astley). Though sadly both are no longer with us, they left fine bodies of work behind them and while the selections here do not figure as the most familiar, they do have their merits.

Edwin Astley began his musical career in World War Two playing saxophone for the troops and on his return to Civvy Street set up his own orchestra and had some success with his originals songs in the early UK pop charts. But he really came into his own when he began to record themes and incidental music for TV programmes. We were just entering the “Golden Age” of UK television and some of Astley themes imprinted themselves indelibly on the public consciousness, arguably as much as the programmes themselves. His second theme for “Danger Man” was a triumph and was even covered by the Times on the flipside of their “I Helped Patrick McGeehan Escape” single. Edwin’s musical gift was passed on to his children with daughter Virginia recording with Echo and the Bunnymen, Martin Stephenson, the Skids, her own outfit the Ravishing Beauties and also having a long solo career into the bargain (Brother Jon worked with the Who and elder daughter Karen was once married to Pete Townshend).

Tony Crombie took a different route to TV. Establishing himself as one of the top Jazz drummers/band leaders in the UK through work in the clubs, he was far-sighted enough to note the changing fashions and in 1955 launched his new band the Rockets, who would try and bring the Rock n Roll, currently making waves in the US with Bill Haley and the Comets, to Britain. Though not an authentic Rocker his discs of the time at least plugged people all over the country into the revolutionary sound that was to change popular music forever. In Iceland he is still revered as the man that introduced the country to Rock, so in a roundabout way we can thank him for Bjork!

I have to say though that on this showing Edwin Astley’s experience shows – he knows how to perfectly ramp up the tension (like say the mounting pressure on “Manhunt”), also when to relax on the more frivolous moments (“Opus In Blue”) and the quite wonderful “spy guitar” on “International Defender”. His work here on the obscure 1960 cop series “International Detective” (a short lived but well respected Associated British Pictures series starring Arthur Fleming in the lead role and also featuring Millicent Martin) is a masterclass in composing to screen action – even if you haven’t seen the programme from the sounds you would have a fair idea of the kind of things that went on, square jawed heroes doing the right thing to track down the baddies and bring them to justice, with all the thrills and spills you would expect.

Crombie for his part betrays his Jazz background – his work for “Man From Interpol” (again from 1960, more of a misfire this time with Richard Wymer as Interpol Agent Smith Anthony assigned to Scotland Yard) works perfectly well as Modern Jazz but doesn’t give one the sense of identity that Astley imbues his work with. Crombie’s efforts show the mark of a man who had spent a long time in the hot clubs of Soho bashing the skins and given his flirtation with Rock he obviously saw the step to arranging for TV as a wise move for a man nearly 40 (probably a bit old for the Rock n Roll game, though no age as so far as Jazz was concerned). The theme tune certainly is bracing and brassy, but perhaps not unique enough to put it in the top bracket. Still it is very energetic stuff, the musicianship is of a high standard and it’s always interesting, if not quite as stimulating as Astley’s work here.

So there you have it – these may be pretty obscure soundtracks to mostly forgotten TV shows, but they show on one hand the tremendous craft of someone at the very top of this sort of game, plus one of the very best drummers these islands have ever produced in full swishing tom-tom and swinging cymbals mode. A positive boon for Theme Tune obsessives and a text-book lesson for the rest of us on how music can be used effectively to vastly improve a television programme, not detract from it as intrusive blaring pop music can often do so today. We may not see their like again, so grab a bit here while you can.

Johny Skullknuckles ‘A Face Made For Radio’ – EP Review

Bogshed – an appreciation of wonk genius

December 18, 2017
We use cookies to ensure that we give you the best experience on our website. If you continue to use this site we will assume that you are happy with it.Ok