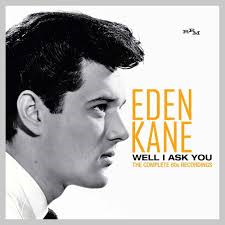 Eden Kane – Well I Ask You: The Complete 60s Recordings

Thorough 56 track overview of the Pre-Fabs hit-maker Eden Kane included all his ’60s recordings along with some ’70s sides and his 1980 single. Ian Canty first ventures into the coffee bar scene and comes out of the other side of it with flowers in what remains of his hair.

Though mostly forgotten today, Eden Kane was a big name in the pre-Beatles UK Pop scene. Born Richard Graham Sarstedt and part of that talented family (he is the elder brother of Peter and Clive, who both saw musical success too), he was part of Britain’s answer to the US Rock ‘n’ Roll explosion. Forming a skiffle band like most music obsessed kids in the ’50s, he was discovered via a talent show at a cinema in the Kings Road Chelsea. After singing a jingle of Cadbury’s (Hot Chocolate Crazy, second track here, also featured on the recent Soho Espresso comp) he signed to Decca gainging immediate success with the title track of this compilation, which hit the top spot in the UK charts in 1961 and firmly established Kane as a top teen idol.

He racked up more hits with MOR-ish Rock ‘N’ Roll ballads which highlighted his hiccupping vocals. Though there was nothing actually wrong with this intrinsically, generally from my point of view he was much better when allowed a little leeway to something with a bit more bite, where his vocals rasped with real feeling. A New Kind Of Lovin’ was a good example, full of attitude and much rawer in comparison with the honeycombed ballads. I Don’t Know Why and Get Lost also featured a certain amount of Blues influence with some agreeable barrelhouse piano. The ballads got him where he needed to be though and from ’61 to ’62 was the height of Kane’s fame. He was at that time one of the biggest stars in the land.

As times changed and the emergent Beat groups began to show their hand, Eden Kane’s stock understandably waned in the face of this next big thing. Beat, along with a general downturn in sale, made Kane’s efforts begin to look very much a thing of the past. This dip in his fortunes was compounded by a foray into Swing which was meant to arrest his commercial decline, but actually made things worse. The move towards the middle of the road was very much par for the course for the “UK Elvis” brigade, where managers attempted to mould their charges into “light entertainers” after the early rush of Rock had subsided. Though his attempts at Swing are perfectly serviceable it just made him look more like the past as the ’60s fast forwarded into the future.

Something needed to be done. In an effort to regain lost ground, he switched labels to Fontana and chanced his arm by mixing his original modus operandi with the new Beat sound, achieving some pretty good results in the process. The best of these probably being his 1964 hit “Boys Cry”. The song itself is notable in forgoing the macho image of the Rockers and with a touch of the Joe Meeks in the production, it straddled the new and the old perfectly. “Come Back” and “Don’t Come Crying To Me” both meld a dirty beat to some wild guitars to good effect and it looked as though Kane might be able to surf this new wave better than a lot of his contemporaries.

It was however a false dawn unfortunately as “Boys Cry” was to be the last time he troubled the charts. As we move onto disc two here we find Kane in the wilderness, but he did plug away and tried (on occasion) to move with the rapidly changing times. I suppose early on he was in a quandary as moving away from his usual style would have alienated his original fan-base and the new Beat hipsters were unlikely to “dig” a square queering their pitch. After a couple of efforts which harked back to the pizzicato-stringed hits of yesteryear, the best song on the entire collection is Gonna Do Something About You, which fits in a neat fuzz solo to some wild Beat that probably didn’t have the Pretty Things losing any sleep but is great nonetheless. But did Kane want to go the whole hog? It didn’t appear so.

The “It’s Eden” album from 1964 is a schizophrenic case in point, given over partly to Georgie Fame-type rave ups of Soul, Blues and Beat but otherwise full of crooners. So the material tends to pinball from typical MOR ballads like the covers of I Who Have Nothing and Smoke Gets In Your Eyes to more interesting fare. Call it a lack of confidence or just the usual ’60s scattershot “get me a hit!” approach, it makes for bitty listening even though Kane himself approaches everything with gusto.

Shoppin’ Around is even a lip-curling throwback to the early Rock ‘n’ Roll that made his name in the first place, though by 1964 it must have seemed a bit old hat. Elsewhere, while it would be difficult to put up a case for his darts at Soul and Blues to be totally authentic, it doesn’t mean they’re not enjoyable and make up the best listening on the LP, with Sticks And Stones and Gonna Send You Back To Georgia being a whole load of fun.

Kane issued one great single, the totally unexpected Folk Rock Protest of The Whole World Was Crying, before emigrating to Australia in 1966. When down under he enlisted a brassy backing band and they are featured on his next three singles to good effect. The initial 7″ inch Gotta Get Through To You was probably the pick, nutty but endearingly so with great horn playing and the self-penned anti-rat race flip A Million Ants wasn’t bad at all too.

As the ’70s dawned, Kane cut a fine, dramatic version of Reason To Believe in the Glen Campbell mode and none the worse for it. The flipside for this one I Played It Like A Fool had some nifty guitar on it too. After this he reverted to his birth name until reviving the Eden Kane pseudonym for 1980’s Soft Rock I Think I Died And Went To Heaven.

This new collection is uneven in places but does tell an intriguing story with more than a few moments when the stars aligned and magic prevailed. Fans of early ’60s Pop will be in their element here – not everything works but when given decent material, Kane could come up with the goods.

The good news is Eden Kane is performing to this day and no doubt still knocks out a good version of Boys Cry – his website is here.