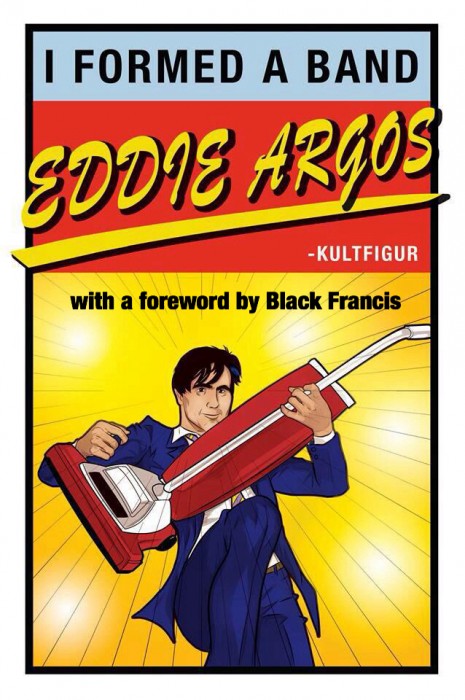 Art Brut’s career has been one of daft triumphs, excellently wasted opportunities, near-misses with chart heroics and a goddamn great set of punk tunes.

Lead vocalist Eddie Argos has had the dubious luck to appear naked on the front of NME when it was actually written by people who had heard of music around and about. His lyrics range from the intensely personal and delicately romantic to pure, ace punk nihilism and the wonderfully hubristic; his energetic stage presence taking cues from Just William (one of his literary heroes), Jimmy Pursey and the relentless clambering of near-contemporary indie-head turned-establishment-talentshow-hyphenated-machine Ricky Wilson.

He’s also the author of I Formed A Band, the story of how Art Brut came into being, the missteps, mishaps, clashes and laughs on the road and the ultimate honour of being produced by Frank Black of the Pixies.

The book was self-published and has to date sold over 1,000 copies. Fear not if you don’t have one, though: Argos is coming to the UK with a spoken word show that fills in the gaps.

“It’s the story of how I started the band,” says the musician of his live show. “And what an idiot I am, basically.”

The experience is very different from a gig with Art Brut, he says. “With the band, if I make a lame joke we can just launch into Formed A Band or My Little Brother, and people forget. But with this there’s no escaping the bad jokes.”

“I’m not sure how normal comedians do it so I just wrote something down, learned it and started doing it live. It changed of course, like everything does in your life. It’s the same story but different every night.”

Whilst on some posters and flyers the show is billed as Eddie Argos teaching people how to be famous, in fact it’s probably the opposite.

“I have go round correcting people, ‘I’m really sorry, I can’t tell you how to do that.’ I don’t want to ruin the show, but I like the fact that the poster became accidentally completely untrue. I enjoy the confusion.”

There are obvious parallels with KLF’s notorious/famous The Manual,  which laid out the exact process needed for a chart hit. By contrast, the Argos show is ‘all about enthusiasm, rather than having a plan.’

“The book is very enthusiastic. I hope people reading it think, ‘if that idiot can do it, I can do it too.’ The music that I like – and it is a personal choice – comes from enthusiastic people rather than getting the best musicians or whatever.”

Those bumblings, stumblings and wonderful moments of transcendence where everything comes together are delicious to read about; with Argos’ everyman-underdog-artist charisma and live presence, a powerful mix is in store. I Formed A Band, however, in true Art Brut tradition, has been something of a victim of its own success.

“I had a literary agent, I’m really impatient, so I said to her, ‘I’ll put it out myself.’ And it did well, selling about 700 copies [quite quickly] so I said, ‘Well, now maybe you can get a real [publisher] to put it out.’ And she said, ‘Well now you’ve sold too many. Normally people only make 500 new books.”

Argos describes himself as ‘a control freak without the skills to be a control freak,’ and notes that Art Brut’s experiences of jumping between various record labels and various let-downs definitely had an impact on his DIY publishing decision.

The live spoken word show is strictly that – there’s no music in his set. Mostly, says the Berlin-based artist, because he, ‘Can’t play anything.’ Readers of the book will already know that the closest this man ever comes to holding an instrument is using household cleaners in lieu of guitars. We shall say no more. He does, however, come on and go off to specially selected songs, which he is coy about when it comes to naming them. (We’re hoping for ‘Simply The Best’ by Tina Turner, but it seems unlikely.)

“I then come on again and ruin it by taking questions,” he laughs.

He’s just coming off the back of a German tour, during which a lot of the same questions were thrown at him in the Q&A session.

“Every time, it’s the same: ‘When is the next Art Brut album coming out?’ and I always say, ‘End of the Year.’ People ask about Emily Kane and if My Little Brother is real. I think people want to hear the anecdotes behind those things, even though they already know the answers.’

“In Nuremburg, one kid wanted to know all about Art Goblins which was my first band. There’s a song called ‘Fuck the MSP,’ about Manic Street Preachers, and he went into great detail about that song. I didn’t even write that, it was my friend, I was 17 at the time and he was singing it to me.”

Other queries are more personal on the part of the individual asking.

“I mean, I’m not a doctor,” declares Argos. “I can’t help you with medical things. But if I had my way I’d just run around answering questions. It’s pretty fun. I like improvising and making things up on the spot, but I don’t think people would come out just for that.”

Given that a lot of the questions he’s presented with are addressed in I Formed A Band, he jokes that his stock answer will from hereon in be, “Well my book costs ten pounds, it’s over there.”

One story that does always go down well in Hamburg concerns Argos’ limited vocabulary when he first moved across to Deutschland.

“All I knew was ‘Punk Rock Ist Nicht Tot [Punk Rock is not dead]’ and the St. Pauli fans in particular really love that. They looked after me a lot.”

That football club is famously left-wing and anti-establishment; indeed, another famous associate is one Attila The Stockbroker, the long-standing activist, punk poet and mandolin-basher.

“I’ve seen him a few times,” Argos notes. “I really like John Otway and they often play together, including their collaboration.”

Other touchpoints include, somewhat inevitably, Stewart Lee, who has cultivated an onstage persona that is based on himself and yet also is an obvious construction.

“He talks a lot about how he’s not really like he is on stage, but I am,” explains Argos. “There’s nothing I can do about it. I’ve loved Stuart Lee for a long time, and when you like things they inevitably [feed through your own work. Like, he talks for a long time without there actually being a joke,”

“We played with him every night touring a musical [The Island] and I thought,  ‘Your job is standing there every night telling a long story. I can do that.’ But seeing people like John doing his thing, or poets, it’s brilliant. It’s not that I pick up their style, but it is inspiring to see them.”

And thus a new world of creative expression and audience connection is opened up.

When a word is not a word

So far, the gigs have been very positively-attended in the main, with Argos’ conversational style stymieing any potential heckling by nature.

“[Sometimes because of that people] sort of forget they’re at a show and ask questions and I have to get them to do so at the end: ‘Can’t answer right now mate but save it, write it down, and I’ll do it at the end.’”

“I did a show in Edinburgh and some guy was going on about how I shouldn’t say it’s spoken word, because it’s not poetry. I asked, ‘Well what is it then. I am speaking words.’ And I saw a review that began, ‘If you’ve heard the lyrics of Eddie Argos you’ll know he won’t be a very good poet.’ I don’t really care about that sort of thing any more after 12 years in a band, we’ve had so many bad reviews.”

His collaborators on The Islanders, Jim Moray and Amy Mason, had to be similarly forewarned about the possibility of negative press.

Such is life, albeit most artists don’t put a song on an album declaring their hate for the entire record-buying public (apart from the ones who liked his band,) going on to compare them to the horned one himself. Art Brut vs. Satan was the result, and a blindin’ track it is too.

As for the future, part two of the Eddie Argos story is there to be written, with more about his own artistic endeavours, collaborations and side projects. He’s also enamoured of the title ‘Eddie Argos Still Hasn’t Got A Proper Job,’ which may or may not end up being the tagline for a future spoken word tour.

“I just think it would look funny on the posters,” he says. In fact, when he jokes about it during the current show, he finds promoters are already checking calendars to line up the bookings accordingly.

Before that, there’s the small matter of that pesky new Art Brut album. Eddie assures us that as soon as our interview is over, he’s getting straight on the phone to his manager to arrange studio dates. All being well, the LP should be out… well, you know the rest.

The tour features different supports most nights, ranging from poets to musical acts.

March 24 York, The Duchess – this gig has been cancelled. Contact https://theduchessyork.co.uk/ for refunds.

March 27 Glasgow, The Hug and Pint.

You can find out about Art Brut, Eddie Argos and his book if you know how to click good, dudes. Eddie tweets, too.