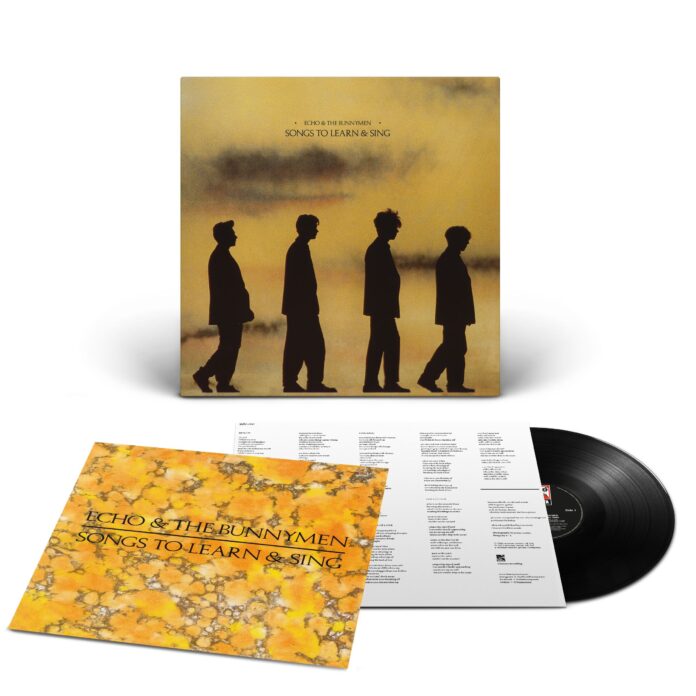 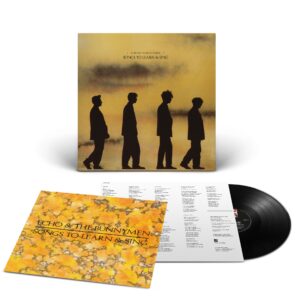 Echo & The Bunnymen: Songs To Learn And Sing

Echo & The Bunnymen have finally released their first four classic albums on vinyl and to follow this they release the singles album Songs To Learn & Sing which is a great introduction to any newcomer, or music junkie who has been living in a cave since the Eighties and have amazingly bypassed the excellence of probably one of the greatest bands to ever emerge from Liverpool.

There is and always will be an argument about who is the best band from Liverpool. The Beatles are obviously the main targets due to their undoubted influence on the music scene in general, yet people seem to overlook the stuff that came after when the scene was thriving around iconic clubs like Eric’s, with the whole post punk / new wave scene throwing out different genres and creating a new dark sound that resonated with the kids of that era. I’m not from Liverpool so be kind to me if I’m wrong, as I was still exploring music, but from the tales I’ve heard and read about it was an exciting time with bands The Teardrop Explodes and the characters like Pete Burns, Bill Drummond (KLF) and Dave Balfe (went on to manage Blur) milling around. It sounded like a creative bubbling pot of like minded stoners all cooking up a new brand of incredible music that was and still is a massive influence on our bands today. The Bunnymen were one of these bands that really caught my attention as a youngster and they’ve released some of the best albums you’ll ever need to add to your vinyl collection. For you kids out there here’s a bit information to drag you into that world…

ECHO & THE BUNNYMEN were formed in Liverpool in 1978 with Ian McCulloch on vocals and rhythm guitar, Will Sergeant on lead guitar and Les Pattinson on bass. They were soon joined by Pete De Freitas on drums and the rest, as they say, is history. When SONGS TO LEARN & SING was originally released, the band were already a force to be reckoned
with, pioneering the new wave scene with four highly acclaimed studio albums. It began with their classic debut Crocodiles in 1980, released amidst the growing wave of post-punk. Crocodiles cemented the band’s reputation as one of the best around with the NME describing it as “probably the best album this year by a British band”. The album went on to finish in many critics greatest ever debut album lists.

The band followed the album with the release of the Shine So Hard EP in 1981, recorded live at the Pavilion Gardens in Buxton, before releasing their second studio album Heaven Up Here the same year. It became the band’s first UK Top 10 album, winning the 1981 NME Best Album award in the process. Considered to be a darker album, Heaven Up Here was produced by Hugh Jones, and was well received by critics and fans alike, featuring tracks such as A Promise, Over the Wall and Show of Strength. The band’s cult status was transformed into mainstream success in 1983 with the release of their third album Porcupine, produced by Ian Broudie, providing their best chart performances, with The Cutter reaching #8 in the singles charts and Porcupine finishing #2 in the album charts and being certified Gold.

1984 brought the fourth studio album Ocean Rain, regarded by many as the band’s classic opus. Recorded in Liverpool and Paris, the band used a 35-piece orchestra with award winning composer Adam Peters scoring the strings. The iconic, atmospheric cover artwork was taken in the stunning Carnglaze Caverns in Cornwall by photographer Brian Griffin, who also shot their three previous album covers. Ocean Rain continued the band’s use of strings, creating a dark, ethereal aura. Three classic singles were released from the album – Silver, Seven Seas and the massive anthem The Killing Moon, which reached #9 in the UK singles chart and continues to transcend generations to this day.

What a great starting point to get your teeth into those first four classic albums that still stand the test of time and show a band maturing with each release. The surprise on this collection is only one song from the debut Crocodiles – Rescue. It’s catchy and relevant with a stunning bass line from Pattinson, the noted drums of De Freitas and some early skillful guitar work from the iconic Will Sergeant backed by the ever evolving McCulloch. The start of a classic band that rose from the ashes of pre Teardrop Explodes and the early Julian Cope years. Next up The Puppet was a single released after Crocodile with b-side Do It Clean which failed to chart yet still sounds majestic today and was produced by Drummond and Balfe under the moniker The Chameleons. Weird…

A Promise still sounds glorious and was again the only song lifted from Heaven Up Here which is layered with Sergeant’s signature guitar sound and was always an album hailed by the critics and reviewed by our very own Gordon Rutherford here as being the album where the Bunnymen were poised for the big time with the next release. In Gordon’s words “For forty years, Heaven Up Here has been a constant companion. It’s an album that has lifted me up and laid me down again, so many times”.

Next up are two tracks from the excellent Porcupine which propelled them into the mainstream with their first charting hit Back Of Love which hit Number 19. An anthemic number which has appeared on many film soundtracks and has a haunting power that sees McCulloch pouring out his emotions with passion. That guitar chug and bass still sounds amazing now. The Cutter was the one that lifted the band to higher heights, reaching Number 8 with a more radio friendly sound and some great drumming from De Freitas and a more uplifting sound from some of the dark brooding moments on Porcupine.

Never Stop was another one off single released just after Porcupine and reached Number 15 with it’s funky undertones and trademark sound from the solid engine room of Sergeant, McCulloch, Pattinson and De Freitas. An upbeat tune with the same sinister vibes of their unique sound and the production yet again from Broudie who always had a massive presence to their sound.

The next three tracks I could listen to on loop for an eternity. All lifted from what to me is THE best Bunnymen album created (Evergreen is a second close). I was at the anniversary gig at Manchester Academy back in 2011 and it was stunning. The whole album was played back to back and they then launched into a greatest hits set which went on for a good two and a half hours to everyone’s pleasure, or pain if you had bad knees and a low tolerance for standing! The Killing Moon is just aural heaven, a masterpiece of a tune that always reminds me of the opening scene to Donnie Darko which is etched in my mind forever. A beautiful song that has hints of The Doors and sounds massive in scope. Haunting and stunning. Silver, the opening track from Ocean Rain is just drenched with an amazing orchestral sound and an amazing chorus that lifts your soul and pushes the whole experience forward when the dark Nocturnal Me goes into dark gothic territory.

Seven Seas is such a good song. Sergeants guitar work is exemplary and the chorus is a mass anthemic celebration that still sends shivers up my spine. One of McCulloch’s greatest moments. Last track Bring On The Dancing Horses was a song recorded for the John Hughes film Pretty In Pink which has one the most iconic soundtracks in film history. A majestic song full of synths and a massive array of melody backed by McCulloch’s distinctive vocals and a shimmering guitar attack from Sergeant which has a hint of How Soon Is Now flowing throughout.

If you need an introduction to an album that lifts the lid on these first four classic albums then look no further. There’s a lot of dark and light to get through and this set of classic singles will take you in through that kaleidoscope window into a world of sonic magic by one of the greatest bands on the planet.