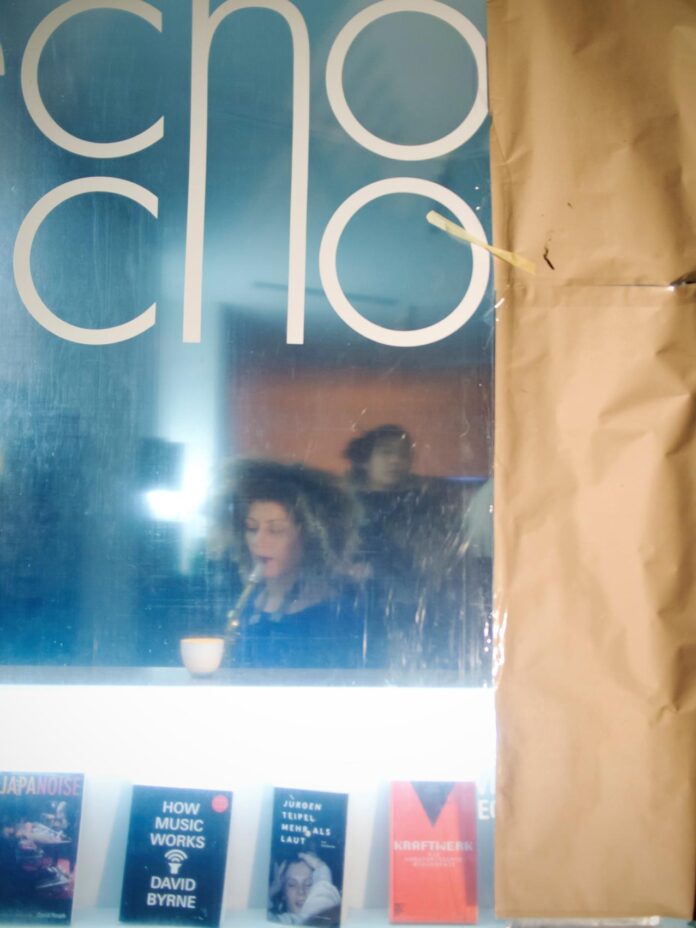 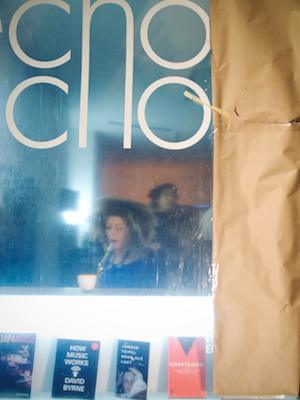 Our Berlin correspondent Barry Lanigan continues to explore the delights of the city, this time with a live art and music show at bookstore Echo Echo.

It’s not every Saturday night you find yourself in a book store, but, alas, here we are in Echo Echo – an interesting store-cum-open space in the Wedding district, that also sells independent records of local artists. Owner David Armengou, originally from Barcelona, informs me that the place is not yet two years old, but local media and residents are showing interest in the place and it’s easy to see why. There are four acts performing tonight and all four doing so simultaneously.

Projected on one wall of the space is the work of Osaka-born Yukihiro Taguchi. Taguchi’s hypnotic video is composed of thousands of image stills from around the globe cleverly and painstakingly sequenced into live motion.

Every now and again there is a close up of location, which you are then take inside and the journey continues. The images document his street art made from stencils and transfers of everything from corrugated walls to manholes. The manhole covers from the various locations have been transfered into prints and onto t-shirts, and for entrances into tunnels of human waste, are suprisingly ornate.

Another Osaka native, DJ Sano Minoru, provides Jazz infected electro beats and filthy bass grooves to accompany his fellow hometowner. Essentially he only produces music as film accompaniment. I’m always a little sceptical of how ‘live’ a live DJ actually is, but Minoru is sweating and busily switching records and running around with speakers into the next room where Taguchi is now painting onto a glass plate over his own projections. His music is worth checking out.

The drone of an alto sax comes out of nowhere. Moving effortlessly through the growing crowd is electric-haired Greek native Miss Saxo Vaya. Vaya, an artist, actress and musician has performed as an improv saxophonist in clubs and venues all over the world.

Somewhat of a livewire and oozing sassiness, she drops in soothing melodies to accompany Minoru, which isn’t easy considering it is totally unrehearsed. Currently she’s busy performing between Berlin and Greece. Her artwork is equally impressive.

As Echo Echo is mainly a bookstore, I should mention the very reasonably-priced and impressive selection of books on display here: histories of post-punk and post-punk biographies; oral accounts of Berlin nightlife from the seventies to now; rave and ‘E’ culture anthologies;  a John Cage series; shock-art and Japanese noise music to name but a few both in German and English. It’s a joy to browse through such carefully selected stock without being told this is not a library and to live music and conversation.

There is no escape from the world of art at tonight’s event. Outside smokers and passers-by are watching graffiti artist Jerome Boucherie at work like a man possessed. He sells one or two casually, barely stopping which, in this cold, is the least he deserves.

Echo Echo is a free-space independent bookstore in Wedding

All words by Barry Lanigan. You can read more from Barry on his Louder Than War author profile.