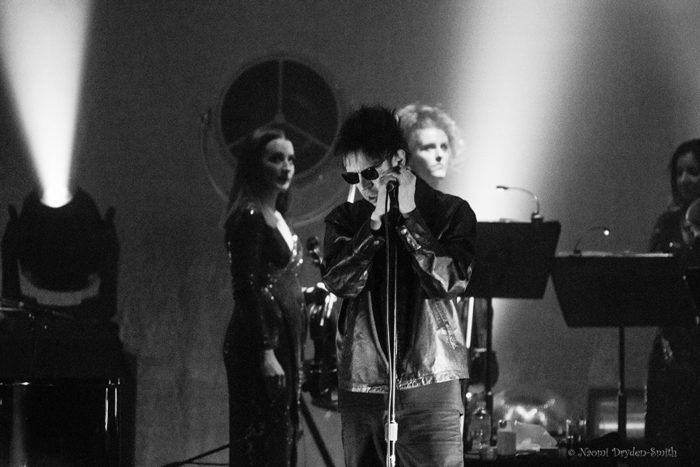 In Louder Than War’s second night out at a Bunnymen show in a week, long-time fan Naomi Dryden-Smith enjoyed a blissed-out, strings-filled evening in the majestic Royal Albert Hall

As a dream venue, the RAH is probably not the most obvious choice – plush red velvet seats and weird blobs on the ceiling are a far cry from the giddy rock heights of Wembley Stadium or the Hollywood Bowl – but this was always going to be a great show, knowing what magic EATB can do with strings. Looking around, you have to wonder what relative newcomers Enation, tonight’s support over from the States, make of it all. Slightly dwarfed by their surroundings, Jonathan Jackson (better known for his acting role in TV show Nashville), brother Richard and Jonathan “Moon” Thatcher impress with a sound hovering around Soundgarden, Muse, with a bit of Placebo thrown in. Particularly good is the fabulous Anthem for the Apocalypse, which more than does justice to the venue. Jackson has a seriously good rock voice, look forward to seeing more of them.

Echo and the Bunnymen were every bit as good as they were at the Manchester Bridgewater Hall – check out our brilliant review by John Robb here.

Rescue
Villiers Terrace (With Roadhouse Blues snippet at end)
All That Jazz
Stormy Weather
The Somnabulist
Nothing Lasts Forever
All My Colours
Angels and Devils
Bedbugs and Ballyhoo
Lips Like Sugar
Rust
In The Margins
Bring On the Dancing Horses
Seven Seas
How Far?
The Cutter

Echo and the Bunnymen’s new studio album The Stars, The Oceans & The Moon will be released in October 2018, reinventing some of their old hits. You can keep up to date with them on Twitter, Facebook and their official website. They have also just announced an Autumn tour.