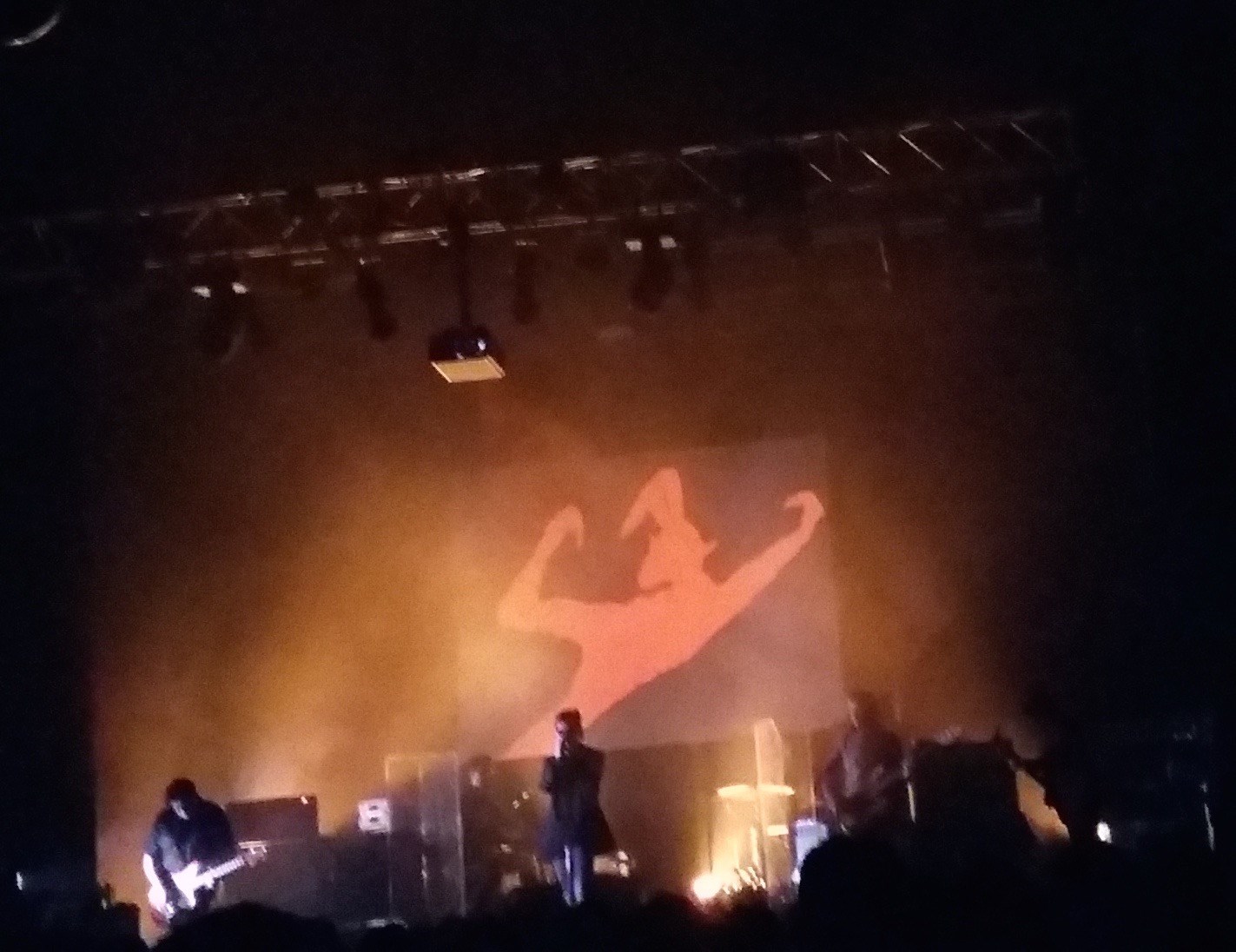 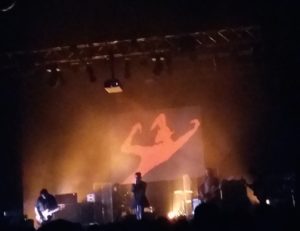 Tonight this really is a room full of sound.

A sound perfectly sculpted and layered perfectly mix by the sound man, a sound full of emotion and beauty and yet also full of the noise and thrill and electicity of great rock music and yet again somehow perfect pop and yet again steeped in the generational DNA that entwines it with people’s lives.

Echo And The Bunnymen are delivering one of their greatest performances that defies all logic and rules – the band play perfectly and that great combination of Will Seargent’s chiming captain trips guitar and Ian McCulloch’s stunning emotion stained vocals create an enchanting and eternal magic in the timeless venue that is the perfect backdrop to the band’s sound.

The Ritz is the perfect venue for Echo And the Bunnymen – steeped in history and that eternal its walls echo to the band’s timeless songs in the stifling heat of a packed out venue.

If, as Alan Partridge once said, that Wings are the band the Beatles could have been maybe in post punk terms U2 are the band that the Bunnymen could have been – but even in that sarcy aside there is a trusim – at one time the Bunnymen could have had it all but settled for big cult brilliance where art was everything whilst U2 hoovered up the stadiums. This is no slight on U2 but there is a feeling the world has been robbed in a small way as tonight’s set shows a band in its pomp, at the peak of it powers, defying age, gravity and old father time to make this a masterclass of songs that sound greater than ever.

It shouldn’t be like this – at this stage of the game perfunctory run throughs of hits are enough to satisfy but the Bunnymen are still curious to see what can be done with their music and are constantly prodding these old classics looking for new ways to make these classic songs thrill.

The Bunnymen are virtually the last men standing from the great northern post punk wars – the times of Joy Division, Factory, Zoo and weird named bands from Liverpool getting Peel sessions. This was the time of the much documented melancholy stained music that slipped out in the aftermath of punk as the northern cities redefined the new energy on their own terms, a time when Liverpool and Manchester created a new music narrative which saw the Bunnymen like Joy Division at the heart of something very special. A set like this is a celebration of those times but also a celebration of restless creativity as the band play their classics but redefine them and strip them down and find new textures and emotions inside their own back catalogue.

Ever enigmatic the band manage to be several things at once – dark and glacial psychedelia, arms aloft terrace anthems, classic underground twists and turns or perfect pop. At one minute charismatic frontman ian McCulloch can be displaying a perfect sensitivity with his 24 carat gold voice – the croon that echoes down the decades and the next minute he can be swaggering like Liam Gallagher’s older brother – the Bunnymen were many things to many people but they remain a band people swear by and tonight, in a  faultless display, they leave an audience talking about a perfect gig as they escape the venue heat at the end of the set and out into the damp Manchester night air.

The Bunnymen do classic so perfectly these days, stretching out those canon of hits into new shapes and textures, just how many different ways can you play Killing Moon and never lose the essence of its sheer beauty? stripped down to its quicksilver melody and toying with it whilst adding new semi improvised sections and dropping instruments out and still retain that sense of longing that still hangs in the air. Many bands at this stage of the game bang out the hits, never daring to let them move on – meddling with the known and set in stone can kill a song dead but for the Bunnymen it’s different as they seem perfectly at ease with this process.

Northern eternals – decades in and they are still here, part of the cultural DNA and landscape. They are one of those rarest of groups that gets better with age – never teenage sensations they arrived drenched in the classics and sang songs full of mystery and wisdom like young old men with old heads armed with songs that captured that perfect late seventies northern melancholy. They walked that thin line between Bowie and Morrison – the thin white duke and Mr Mojo Rising. Like these iconic figures The Bunnymen were always capable of turning the freak out into great pop, walking that perfect line between psychedelia and the top ten and doing that thing that the greatest of bands do – find the magical and the mystical int the mundane – the glimmer of gold in the rainswept post industrial northern towns – creating the magic stuff not in LA but in the dead spaces of the post industrial pre coffee bar north.

Mac has a voice that defies gravity – surely after all that rock n roll and all those years it should be wearing thin at the edges, rasping into oblivion after endless late nights but it somehow sounds greater and stronger than ever. A huge voice brimful of all those emotions that northern men of our vintage don’t like to let on in public – and that’s why these singers are treasured, like Ian Curtis it was that eliciting of the baritone to speak a thousand words that hit a raw nerve then and now. The voice slithers through the shards and ripped poetry to evolve its mystery phrasing without ever making total and mundane sense – and it’s that cut and paste, shimmering, near meaning of the words that adds to the mystique of the band but when delivered in the voice it makes total sense anyway. With his phrasing and enunciation Mac makes the most of every syllable and every vowel stretching the words out like treacle – like Sinatra or Dylan it’s not so much the singing but the way you pronounce that makes the moment.

The perfect counterpoint is, of course, Will Sergeant’s guitar – its simmers, it rings, it cuts glass and it trips out – is like Will has LSD dripping from his fingers but instead of the creepy crawly, messy madness of so much trips music he reigns it all in somehow into classic pop template. A template endlessly copied by Brit indie for generations – the wild eyed enigmatic foreman hidden his shades with the generation voice of the angels and the studious guitar genius hunched over his classic guitar collection. Bands as diverse as  Coldplay and the Verve have made millions from this template whilst U2 have sweated an ocean to try and get a teardrop of that Bunny-cool and still cannot find it.

When Mac claims, post gig, the greatness of the band it can easily be dismissed as bravado or irony bluff but he speaketh the truth. On a night like this the Bunnymen truly are one of the greatest rock n roll bands we have ever produced. It was transcendental, powerful and thrilling, it soared, it moved and it surfed on a pure glissando beauty.

Framed by the iconic and mysterious Bunny-god backdrop the band own the stage with minimum fuss from the opening Going Up which swells and surges with that wave after wave of emotion and melody – the Bunnymen were always tuned into nature and their songs were like snapshots of the wind and the rain and sea and the big skies over Lancashire towns and seaside ports – a perfect reflection of their immediate world on the edges of their city.

Crocodiles is a reminder of the post punk wars – the skinny young bands with strange names coming out of Liverpool and the north west with the Bunnymen as the most enigmatic. Do It Clean, from the same period, is stretched taut and thin  – dropping down and building up toying with the dynamics, adding James Brown to the mix. The same with Villers Terrace which still sound like the pages ripped from a surrealist lysergic diary – a snapshot of a long lost Liverpool, whilst Rescue still sounds enormous as it chimes in on that guitar figure and drips with the same kind of melancholy and euphoria that Joy Division played with as well. The more pop hits like Lips Like Sugar, Seven Seas and Bring On the Dancing Horses are like a lesson in eighties alt pop and the fact that so many indie groups now sound like the Bunnynen is a quiet measure of their influence.

The Cutter swells and builds like perfect Bunny-pop and the fact that it also, somehow, works as a terrace anthem with mass outbreaks of slightly drunken singing is a testament to its success as a song whilst Nothing Lasts Forever is that rarest of things – a comeback single that eclipses the band’s previous catalogue apart from The Killing Moon which is one of the greatest songs ever written and it stretched out into new shapes that add to its smouldering and dark beauty and intent.

The final encore of Ocean Rain is the best moment tonight though – a stunning use of dynamic with the deceptively quiet section crashing into a storm of noise and then back again, it drips with the emotion and the overcast skies of perfect Bunny-cholia – the nature metaphors are everywhere and it brings the whole set to a stunning climax.

An evening like this is a perfect example of fast forwarding towards your climax and defying the years and and making heading towards sixty sound like an advantage. It’s like the Bunnymen themselves have finally realised what their songs are about and also realised the strengths of their own music and have the genuine confidence to take it to its own climactic conclusion.