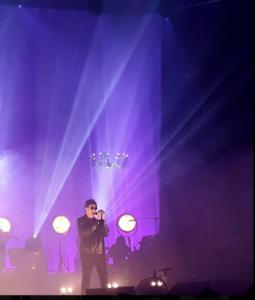 Ambition has never scared the Bunnymen.

Even ‘back in the day’ there was a vaulting confidence about them. They were the introvert extroverts. Where most groups were hiding behind the inventive yet small scale dreams of post punk and already defeated by the rock cannon, the Bunnymen were instilled with a belief that they were standing on the shoulders of the saints – the Bowie/Doors axis that was such a powerful part of the northern cultural DNA was merely a signpost for the band and not an anchor.

They played that neat trick of being both pop and populist but imbued with the dark spirit of the underground. There were the shape shifting shrouds of darkness in their area that matched the mood of the times but there was also a delicious mystery and a spectral brooding in those classic songs as they ushered in a new psychedelic age and heralded a new west coast sound. The (north) west coast of the post industrial Lancashire with its endless, huge, grey skies and damp beaches and damp forests perched on the edges of broken city centres. The Bunnymen tapped into this unique landscape with songs littered with the power of nature and the wide open spaces on their doorstep which they have rerecorded with added spectral strings for the upcoming ‘The Stars, The Oceans & The Moon’ album.

They had the songs. They had the spook guitar from Will Seargent. They had the crack squad rhythm section that was like a machine and they had Ian McCulloch, who managed to walk the tightrope between Smash Hits pin up and lysergic northern poet armed with the Bunny-hair, Smash Hits lips and that voice that was soaked in Sinatra, Ziggy, the crooners and the boomers – a soaring baritone that made the music fly.

They could have been the biggest band in the world but they were far too cool for that nonsense. There never could be any flag waving from the Bunnymen. They were above all that kind of stuff. They made the music on their own terms. They were dreaming of classic and not stadiums. They were never overpriced burgers in enormodromes. They were mysterions on the fringes of popular culture who somehow still managed to be a big band without all the flab of mega mainstream.

Decades later they remain rooted in this place.cA place of beguiling mystery and fervent fan base. Tonight a sold out Bridgewater Hall is testament to their longevity. Veteran status suits the band. They were never a teenage band in the first place – the themes were darker and the soul searching was more enigmatic. And even in this late period land grabs can be made. Nick Cave has proved this with his sudden vaulting to the toppermost of the poppermost  and into the David Bowie role of godfather of intelligent and poetic flickering shadows in the very heart of the mainstream.

It’s available to all those that dare!

And the Bunnymen are daring tonight. This is a celebration of those most precious of back pages with classic hits given an added layer of dark flavours from the strings – a pointer to their grand ambitions remaining untainted. Who could not fall in love the with the cello – the most perfect of string instruments and one that suits the bands overall windswept grand themes. If there was ever a band that suited strings then it was the Bunnymen. Adding drama to their salty seascapes, adding dark melody to their bachannalian orchestra of yearning, the strings underline the classic melancholy and longing that is at the heart of these classic songs etched into the heart of the post punk generation.

Somehow Mac has maintained his voice. Those years of rock n roll should have shattered it into a million pieces but there it is, as sonorous and dark and brooding as ever whilst dripping with a longing, passion and sensitivity that its owner seems almost embarrassed by. His in-between song banter is gruff and eternally northern – littered with football references and asides before plunging into the deep pool of velvet, larynx, artful beauty.

Bridgewater Hall is grand space, the theatre was built 25 years ago and is three tiers enormous and if the sound can get a bit cavernous on the noisier numbers but it suits the pindrop quiet moments like on the goosebump inducing Ocean Rain that tips into a being a classical piece with its emptiness and misty atmospherics holding the breath of the packed venue.

It’s moments like this that make the Bunnymen transcendental. The new version of Killing Moon sees the song deconstructed into a sparse beauty with piano and strings leaving Mac’s voice to carry the song’s innate heartbreak brilliance. Killing Moon is as bold and beautiful as the original. It takes a nerve of steel to deconstruct such a classic song – which is still one of the greats – and rebuild it as something else. The impassioned croon from McCulloch makes this a spellbinding moment – full of passion and longing and regret  and jaw droopingly beautiful and intense. Killing Moon is a dark, romantic cloud hovering in the warm night sky and a darling reimagining of a song that has become so much part of our firmament.

Of course strings have often been part of their trademark sound – they have done it before and strings have been a big part of the vaulting ambition and dynamic of the group. Sometimes the cavernous acoustics of the venue get in the way and some of the songs lose some the added layers of sound but once we are settled in the flowers begin to bloom.

The hits get everyone out of their seats and are reminder of the band’s pop prowess and a time when they ruled Top Of The Pops imperious with their justified arrogance at playing the music game on their own terms. Laced with the sea stained imagery that is so much part and parcel of their home city Seven Seas still swaggers, Bring On The Dancing Horses is pop perfection entwined by a Lovecraftian mystery and enhanced by the brooding strings adding a mood shift and dynamic and underlying the grandiose ambition of the band. The Cutter is epic, the string parts, that are already part of its swooping grandeur, sound enormous and its stormy dynamics and huge climactic end section are perfect for big crowd singalong – an artful and communal take on those much vaulted European nights at Mac’s beloved Anfield turned into aching and timeless musical brilliance.

Grandly ambitious and prepared to take a chance has been part of the Bunnymen lexicon since they first appeared out of the fervent and backbiting Liverpool late seventies post punk scene. At the time they were three with a tinny drum machine and an eloquent and yearning offshoot of the northern grout empire constructed by the likes of the late Mark E Smith.

That kind of obtuse, post punk, grinding is somehow still deeply embedded in their DNA but it’s the classic songwriting and vocals-capes that dominate their sound, those nods to Frank Sinatra with Mac’s phrasing, the heaven up here vocalising of a Scott Walker but very much with his own stamp – what a gift it is to have a voice like this but that’s not the whole Bunny-story. Without his guitar seargent – the aptly named Will Seargent there would be much magic missing, the very northern Will is a musical encyclopaedia who is still remembered in these quarters for delivering one the best psyche DJ sets of all time time – even playing obscurities like Yohawa 13.

Will may look like he would rather be somewhere else but he always did and this natural discomfort is magnetic and part of that anti rock cliche thing that has always made him so perfect. His licks add the magic to the mystery of the Bunnymen – he must be the only guitar player in existence who can resist playing until the golden moment and then he delivers the note – the perfect punctuation or rattle that distinctive rhythm line or the crashing crescendo – it’s all sublime and genius.

The rest of the band huddle in the far corner, locked into the Bunny-groove as the band deliver a misty and pounding All My Colours or the new song, The Somnambulist – another aching piece of Bunny-perfection and like Nothing Lasts Forever proof that there is still plenty in creativity left in the warren.