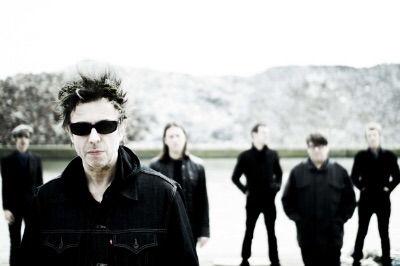 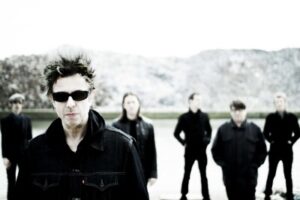 Echo And The Bunnymen/The Fall

Ian McCulloch – the perfectly frank Frank Sinatra of Scouse cool with the golden voice and perfectly dishevelled mop is standing emperor like in the dry ice armed with velvet voice and acidic quip. To his right, hunched over his guitar, is the psychedelic craftsman Will Seargent – the true west coast captain trips – replacing the LSD of the Big Sur with the mournful acid rain of Blundell Sands and the North West’s own dayglo melancholia.

The band swell and surge like the Irish sea and a mournful and melodic beauty hangs in the air.

Mac still holds the room with a voice that he has battered and hammered at for years and should sound like Tom Waits on a sixty ciggy bender and yet still sounds so perfect as it croons its golden perfection across the packed capacity room of the Rockaway Beach festival.

There is always something captivating about a perfect voice and this voice, with its soaring hope and heart breaking sorrow, its stadium filling sense of community and its surly cooler than fuck darkness is still perfectly intact.

There is something perfect and something incongruous about Echo And The Bunnymen headlining the first night of the inaugural Rockaway Beach Festival.

Mac is old enough to remember Butlins redcoats and Ringo in That’ll Be The Day, a Butlins that was synonymous with thumbs up fun and cheeky chappie entertainers – with his aura of dark overlord cool, this a world that the Bunnymen frontman naturally recoils from. Whilst his band deliver a glacially cool set of total perfection and his epic voice floats in crystal perfection you can sense that this a whole new world and whole new experience for both Billy Butlin and Mac.

Butlins of course have been doing this stuff for ages. They were hosting the ATP alt shindigs for years but have wisely decided to do it themselves and tonight their near perfect professionalism and hands on care make this new Rockaway Beach festival a great event. This is a 21st century Butlins repositioning itself as the perfect venue to host festivals and events.

Just before the Bunnymen we have, downstairs, the Fall wheezing through their spiky madness and grinding genius sarc. This pair of bands are two of the long term survivors of the post punk wars and still on their own idiosyncratic headstrong trajectories. The Fall themselves, these days, are as fantastically strange as ever – full of tension and sharp angles and the intoxicating skree of toxic madness. The faithful hang onto their every word and every guttural howl from Smith is welcomed like the Mancunian Delphic oracle speaking in tongues but on nights like these it’s the noise that is enough to captivate with the curious beauty of the Smith cackle as fascinating as ever as it collides with his trusty band’s assimilation of the eternal Fall sound.

If this was any other band this would make no sense but the Fall are not just any other band and once your are in their potent clutches there is no escape from the spectral fascination that goes far beyond the story line of their operation. Patience is rewarded with moments of grout pop bliss from the grinding sound and moments of clarity from the Prestwich oracle.

A Fall gig cannot be judged on good or bad , it can only be enducted.

Back upstairs and a crystalline magic hangs in the air. This could be one of, if not, the best Bunnymen show I’ve ever seen. This is a band at the top of its game. Age suits the band. They have got added layers of wisdom that years of madness and recklessness bring and tonight is a solid gold reminder of how classic this most classic of bands is.

Like a bridge that joins us to the underground rock classic of the Velvets and the Doors to the now the Bunnymen stand there, imperious and proud in their overcoats surrounded by dry ice and the mystic chords. Will Seargent is peeling off eastern tinged guitar licks that trip your mind out as the band chop and change those hit factory of golden hits into new shapes, shapeshifting them and tweaking them lysergically as they go along. It’s this semi jammed nature of their set that adds to the edge the seat of the pants thrill that was so key to that post punk period they emerged from. There was no road map then and there is no road map now. The Bunnymen maybe a fantastic pop band but they also come from the tradition of a time when music was a dark adventure.

It’s this mix of solid cool class and experimental that has always been at the heart of their operation and also their sense of epic and cool. Those hits were milestones in the mid eighties but the way they change them around now keeps them fresh and thrilling. As Will just follows his instinct so does Mac, they keep enough of the shell of the original to keep you singing along with your internal vocal body clock but those twists and turns and inflections give the songs a new vista of acidic beauty.

Seven Seas is a salty trip, The Cutter is majestic and Rescue is a brooding crystalline reminder of those early years of Television guitars and cryptic longing. Their lengthy quote of the Doors classic People Are Strange is as mystical as the original and their comeback hit Nothing Lasts Forever still burns with an incendiary, flame flickering, wistful beauty whilst Killing Moon is still one of the songs of its generation – a drop dead gorgeous piece beautifully delivered by a band at the top of its game. Seasoned by the years to a loose and perfect state like a fine wine they toy with the song’s epic nature and velvet beauty in a perfectly sculpted piece of heart break and dynamic. It’s a stunning moment and a perfect example of making the new out of something old and a reminder of just how important and brilliant this band remain.