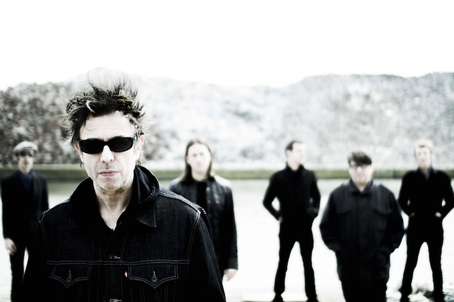 Although it is a cliché to focus on age and appearance in an era when our musical heroes from days passed continuously reform and re-emerge, Echo and The Bunnymen’s two original members, Ian McCulloch and Will Sergeant, certainly look better behind a cloud of dry ice and moody lighting in 2016. Unlike others of their ilk however, The Bunnymen’s aesthetic seems to carry purpose, and their visual and musical darkness created genuine escapism on a Thursday evening in Manchester.  This alone is testament to the integrity of their back catalogue as Michael Halpin found out.

A definite yin and yang surrounds Echo and The Bunnymen and this is part of tonight’s appeal. While the higher register of McCulloch’s vocals can take the audience onto an entirely higher plane, his Scouse drawl at the beginning of the evening brings proceedings right back down to earth, “alright Manchester ” couldn’t sound any less otherworldly if it tried.

Following an epic ‘All That Jazz’, McCulloch, surely one of British music’s most distinctive front men, announces, “I’m feeling shite tonight” and again we get the kind of contrast that the Bunnymen have always managed to charm with.

Will Sergeant’s guitar sounds positively violent during a psychotic ‘Do It Clean’ which briefly morphs into James Browns ‘Sex Machine’ and his 12-string guitar work on ‘Seven Seas’ proves to be as beautiful as expected.

‘Bring On The Dancing Horses’ is followed by McCulloch dryly announcing, “We played Oxford the other night…thick as pig shit there!” before the inevitable ‘Killing Moon’ naturally brings the house down.

McCulloch’s voice struggles during a slightly too urgent ‘Nothing Lasts Forever’ but we do get a few improvised bars of ‘Walk On The Wild Side’ which softens the blow slightly.

‘The Cutter’ is remarkable during the first of two encores and that uncanny knack of being otherworldly in their music, whilst being completely down to earth in their persona, is complete.

You can find Echo & The Bunnymen online here. They also are on Facebook.

All words Michael Halpin. More writing by Michael on Louder Than War can be found at his author’s archive.