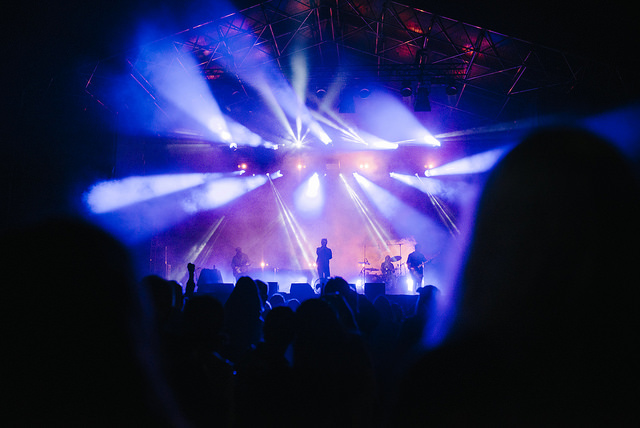 Louder than War report on a groundbreaking and risk-taking festival on the Russian-Estonian border. 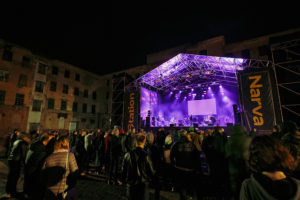 Ever been to Narva? And would you have a reason to go? I bet many wouldn’t, especially given the depressingly familiar political journalese produced around this Russian-speaking Estonian border city. Normally there is little point in mentioning complicated – sometimes sensitive socio-cultural issues in a review of a music festival. But that is precisely why Louder than War were invited; namely to report on a brand new, risk-taking festival that looked to regenerate this fascinating place. The Station Narva Festival was set up by Shiftworks, (the team behind the brilliant Tallinn Music Week, which has done so much to put Estonia on the cultural map) alongside a dynamic local team and various related organisations. Its purpose was to celebrate this tough, proud city; and to massage a some international cultural relations into the mix. And given that the (very rock and roll mayor) Tarmo Tammiste thinks his record collection could buy a new car, it was no surprise that music would be the midwife.

Narva is a place that throws up the strangest combinations and thought bubbles. One such bubble is the Old Trafford bar, placed rather oddly within sight of the Russian border; which makes me think of two sets of Scousers on a cultural mission to this very place. The first is is my friend Gary, who went on a trip from Liverpool to Narva in the 1980s and hipped locals to tapes of Kraftwerk, whilst wagging off from official Soviet-British youth exchange duties. The other is the headliner for this weekend (and one of Gary’s favourite bands), Echo & the Bunnymen. Alongside Tricky, Actress and Gazelle Twin, Echo are here to show that even Narva, the supposedly ugly duckling of Estonia, has the pulling power and ambition of well-heeled Tallinn or Tartu.

And cool. I want to say this now, Narva is cool, in the right sense of the word. You get the feeling the locals make their own entertainment. Take Club Ro-Ro, perched on the river Neva, this is a place that is wild, funny and a little bit frisky. We witness some fisticuffs, drink outrageous vodka cocktails, join in a sing-song and talk deep into the night about literature and Finnish history. Station Narva often had the feeling of an interzone, space collapsing through times and different places. We take in gigs in a park with some old Russian punks, find ourselves watching the Premier League in a cozy family boozer whilst also listening to ‘Sex Dwarf’ by Soft Cell, get racing tips off a property developer who is also a jockey, take taxis with local wannabe politicians who are intent on regenerating the place their way, (ta very much), and watch rap gigs in shopping centres whilst families stock up on the week’s supplies. We also end up both nights in a state of utter abandon at the mighty Kreenholm cotton mill complex, a C19th city within a city that is the setting for the main musical action.

It’s a dizzying weekend; everything feels on the cusp of going wrong or being totally legendary. At Station Narva there is a feeling of unplanned actions being enacted out of sight, things that are long burning and short fused, planned or done on a whim. One is the brilliant Shortparis gig which opens day one’s music and is an hour earlier than planned due to a cancellation. The Saint Petersburg band stumble on the huge stage to about 40 people in the crowd, mostly mildly inquisitive families, over-hyped media types and an outlier of crazy fans. This unexpected situation makes their gig 100 times better than the gliding, theatrical juggernaut they can so easily roll out. The band seem to have chosen this stage to be their last stand and they are almost feral in the gathering dusk, their crushing electro beat having an edge and a hard rock and roll grit to it that can often get lost in the spectacle of one of their shows.  But here, in this Czarist setting, they are simply amazing.

What is also great is that Station Narva is a wild celebration of some of the great Estonian and Russian acts of the past 25 years or so. Monstrous, kicking, wild and colourful gigs by Una Bomba 50+, RSAC, PVC16, Zahir and Sõpruse Puiestee all show that this small country has a number of generous musical talents – and some creative allies in Russia – that still inform the smarter elements of the current underground. Such is the vibe that some of these younger acts push it as hard as they can. We see this with Guesthouse, who let their maniacal arthouse gabber run over their time slot because, well, the vibes were just too good. The chancey rapper Beebilõust also picks up on the devil-may-care attitude of the weekend to lay down some impassioned verbal licks. There’s the feeling he could lose it at any moment, despite his undoubted eloquence. Then there is Mart Avi, who plays one possibly the best show we’ve seen him do. Avi is one to watch; an edgy C21st post-punk flâneur who could easily have been plucked from Picasso’s Paris or one of the more febrile corners of Eric’s club. His gig is a thumping display of electro pop, soul and groove; a snappy walk across the rooftops that somehow manages to feel like he’s channeling Penny Rimbaud, Gil Scott Heron, and the lads behind The End magazine; as well as Kanye. It’s quite a sonic pill to swallow. Better than any shiny file-sharing poptimism nonsense, that’s for sure. The audience sway along, wrapped up in these bass-heavy soul-boy expostulations and realise they are in the presence of a unique spirit. Somehow Avi’s gig is perfectly complemented by Gazelle Twin’s startling show, which feels a very unsettling take on Du Maurier’s Rebecca powered by the white noise currently seeping out of the fissures, cracks and seams of the New Weird British underground. Graves’ White Goddess in jockey aspect, or an androgynous take on one of Bradbury’s firemen, Gazelle Twin’s show becomes a vortex of sonic interference, and has many gasping for breath. 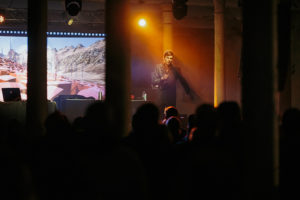 A word about Estonian rap music is in order too. It’s noticeable how eloquent and rich Estonian sounds when it’s being rapped. Beebilõust’s mercurial lines had a quicksilver menace to them, whilst the brilliant 12EEK Monkey (one vehicle for the multiple talents of Estonian mover and shaker Genka) bring out this complicated language’s inner wisdom and power to the fore over the backdrop of some stunning visuals. This duo could be rapping about getting a new extension for the vacuum cleaner; but it doesn’t matter because it sounds incredible. Some brilliantly atmospheric arrangements and a calm, measured delivery that looks to engage the audience by stealth and charm doesn’t hurt matters, either.

And a word about two great rock bands who play on the Saturday. It’s easy to knock guitar rock, and this often leaden-footed and smug genre often doesn’t do itself any favours either. Especially “lad” guitar rock  But when in the presence of a great rock band on form there is little to do but bow to the inevitable. First there is Joensuu 1685, one of the great “lost” bands of the last decade and proof positive that rock music, when in sympathetic and open-minded hands really is a force for the good. Shattering live takes on ‘Nothingness’, ‘Brighter than Light’ and ‘Crystal Light’ all have a spirituality about them that is impossible to fake. Gloriously, fittingly, given this is their first time on Estonian soil, Echo & the Bunnymen play one of their truly great shows of recent years. Visibly inspired by the magnificent, gothic-industrial setting of one of the vast Kreenholm courtyards (and a devoted crowd to boot), Mac is on commanding form, steering the course of the set, bringing a focus and a mystery to tracks like ‘Dancing Horses’ and a magisterial ‘Killing Moon’. Will Sergeant for his part shatters the place into a thousand pieces with his trippy, piercing guitar parts; the lines to ‘Seven Seas’, ‘Over the Wall’ and ‘The Cutter’ searing through the Narvan air like a flashing spear. By the end, courtesy of a stunning take on ‘Ocean Rain’ crash barriers are shaken, people are crying buckets and wildly dancing to the memory of a gig that’s just finished. They really pick the lock to your inner demons, those Bunnymen. 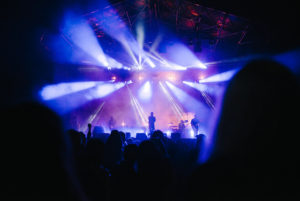 It’s probably best to end whilst thinking on this Liverpool band, their glorious sonic mysteries making total sense in this fascinating place, that on the one hand is robustly down-to-earth and no-nonsense, on the other a natural meeting place of undoubted creative power and potential. And this reviewer really hopes you get a chance to go and look around, even if you are just hipping Kraftwerk tapes to the locals.