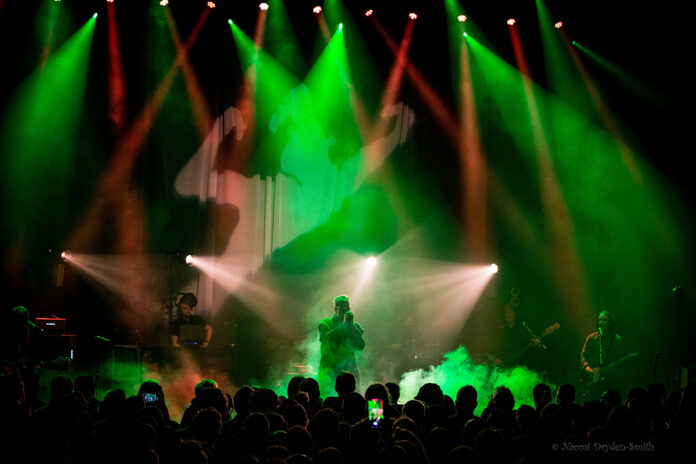 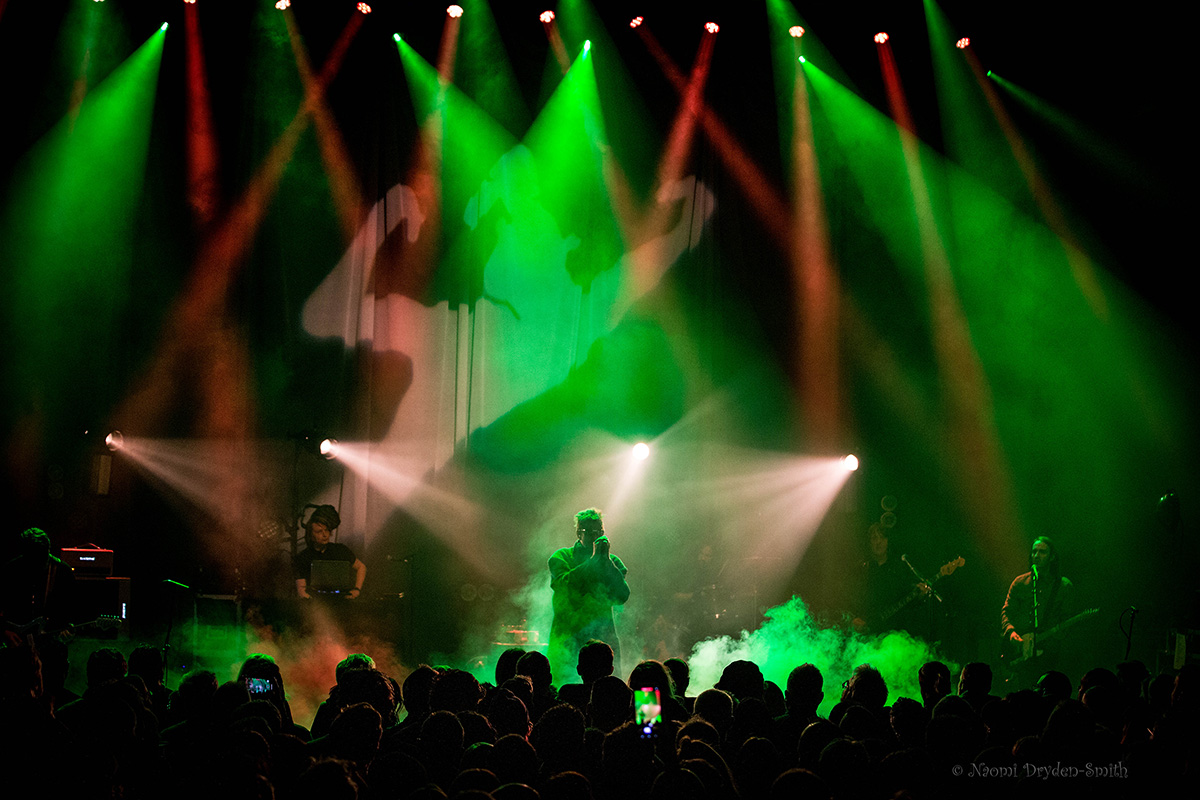 And now…
Breathe out…
The atmosphere is joyous.
The Bunnymen are out of the burrow in a post pandemic display of brooding yet pop brilliance. The defiant and artful brinkmanship that has created their enigmatic but triumphant trip of sound for decades is a reminder of the innate power of soaring melody and moody melancholy.

Released from pandemic prison, many of the audience are at one of their first gigs for years and its fitting that it’s for the imperious Bunnymen – a classic band who deal in the future and the past.

Pre stage time, the tension builds with the support DJ set from DJ Alan McGee, who builds up the atmosphere with classic Cramps, Mary Chain and fellow sonic adventurers who toyed with rock roll bending it into new shapes back in the post punk wars. It’s that post punk landscape drenched with a then new psychedelia that the Bunnymen pioneered with their own definition of west coast lysergic trips and underground cuts transported from ’60s California to ’80s Merseyside. They created a new landscape and terrain as bold and powerful as Joy Division and somehow survived to tell the tale, which they are telling again tonight as powerfully and hypnotically as ever.

Few of these bands survived and few have grasped the now as much as the Bunnymen who somehow take their old anthems and reframe them for the future. Perhaps this is the power of post punk in the hands of the masters? It was never a nostalgia romp and it feels as urgent in the present as in the past.

The Bunnymen have been in this state of regal majestic pomp for some time – maybe 40 plus years. The finest of the fine wine bands, they always had wise old souls inside their frames. 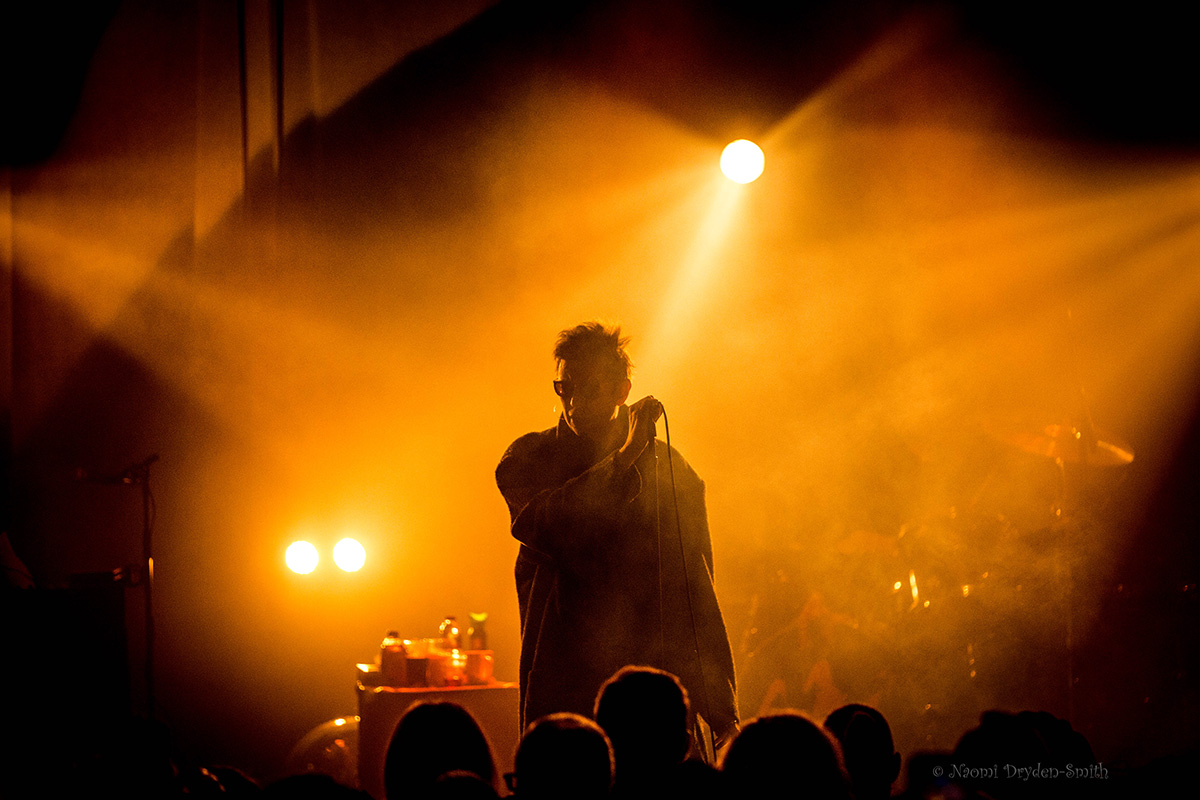 Perhaps post punk was the first music form that was not so heavily rooted in the fleeting blink of youth – many of its bands and themes were deeper than the teenage rampage of surrounding youth culture. This was a music and mysticism entwined, the deeper darker themes of nature, life, love and death – sense and sensitivity – no wonder this stuff ages so well.

Remarkably so have the band – the young bucks who surround the inner core of Will and Mac have time one their side, but the two key protagonists still look the same and have somehow survived the ravages of time and life. Bearded Will now broaching national treasure status with his brilliant autobiography casually dashes off those exotic quicksilver guitar lines that so define the songs, and Mac looks about ten foot tall in a floor length coat – like a Roman Emperor surveying his lands.

Astonishingly he still somehow has the voice of the gods untarnished and untrashed by years of living in the twinkling bright lights – has that voice ever sounded better, as it bounces around the Hall deftly aided by great mixing from the desk that adds dubs and reverbs to accelerate its magic and mystique. The Frank Sinatra croon is filtered through the Scouse brogue and deals in sensuality and beauty, and says all the things that are unspoken in the day to day banter of Northern life which gives it its mystery and power. Only the late and great Mark Lanegan, who we lost this week, had the same kind of expressive and deeply emotional expressive baritone wrapped inside an enigmatic outer shell. Voices that painted pictures on your wall…We have to treasure these treasures whilst they are still here. 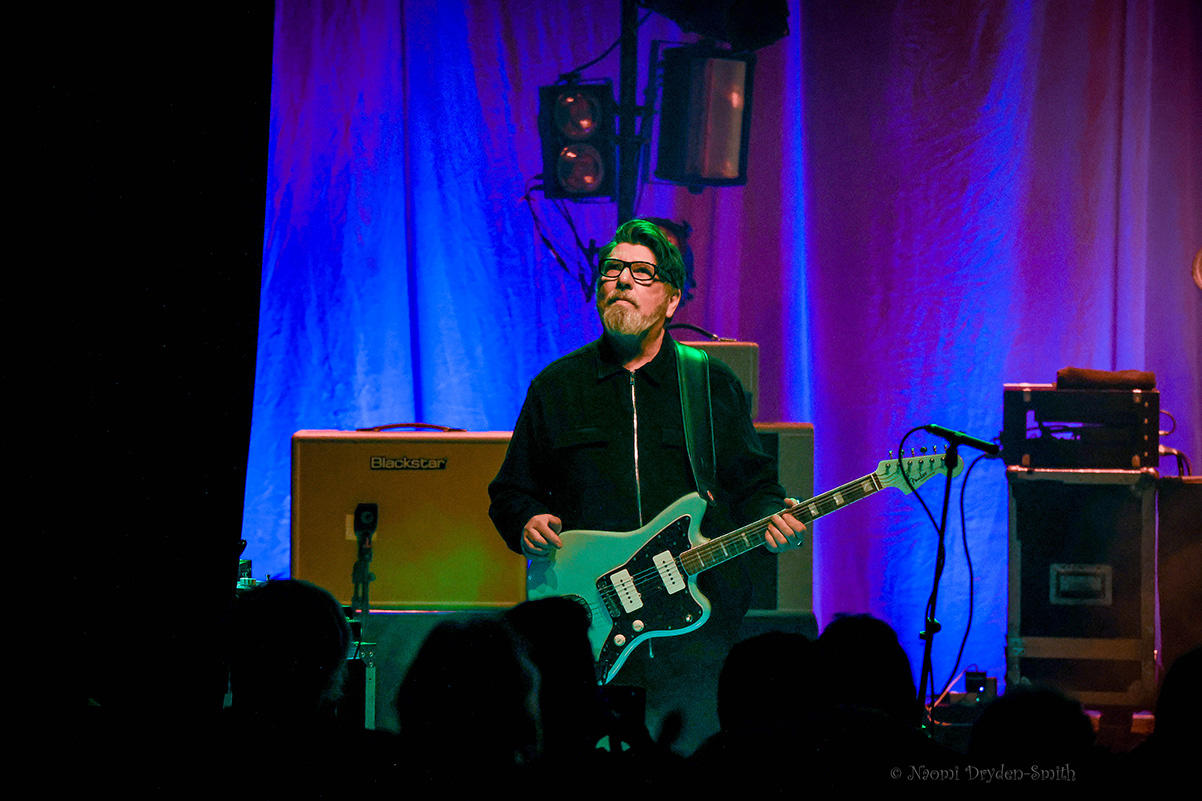 Sonically all is perfect in Bunny-world. The aching arches and ornate roof of the Albert Hall are a perfect backdrop for this kind of grandeur. The stained glass windows rattle and the ornate roof frames perfectly frame these classic songs, adding to their own architecture. Grandeur suits the band.

These are songs that are ingrained in psyche, songs that link the west coast trips of the Doors, the east coast claustrophobia of the Velvets, and through Bowie’s ’70s adventures to the aching vistas of post punk to the now – timeless anthems. It’s a set built around songs of terrain and landscape, sonic adventures and flashes of new creativity and also a series classic hit singles from that curious period when the band seemed like pop naturals. At that time Mac was playing the pin up card and they embraced pop like all great underground bands do when they want to switch it on – hell, even their pals The Fall knew and understood the power of pop, and that the interface between the underground and pop is one of culture’s most powerful moments. Tonight’s set is dotted with these classic moments.

The Bunnymen know this and they are a great pop band and the hits tumble out of the echoey room sounding bigger and more fragrant than ever – The Cutter is almost like the greatest terrace anthem – a terrace anthem that is full of the despair and joy and humour and hope that drenches life and is sung back at the band by the swirling throng remarkably tunefully and, amusingly, in a Manc accent. Seven Seas is an evocation of the brine that made Liverpool – the salty tang of nature and is just one of many songs that stitches the power of that nature into the emotional seas of being human. Over The Wall is full of spooked drama and Villiers Terrace is as an urgent and bohemian snapshot anthem as ever – tonight it dares to musically quote The Doors’ swaggering late period anthem Roadhouse Blues and Bowie’s skinny street walking cheetah anthem, Jean Genie, into its elongated middle section, both as a nod to the classics but also placing the band into that hallowed firmament which makes perfect sense. 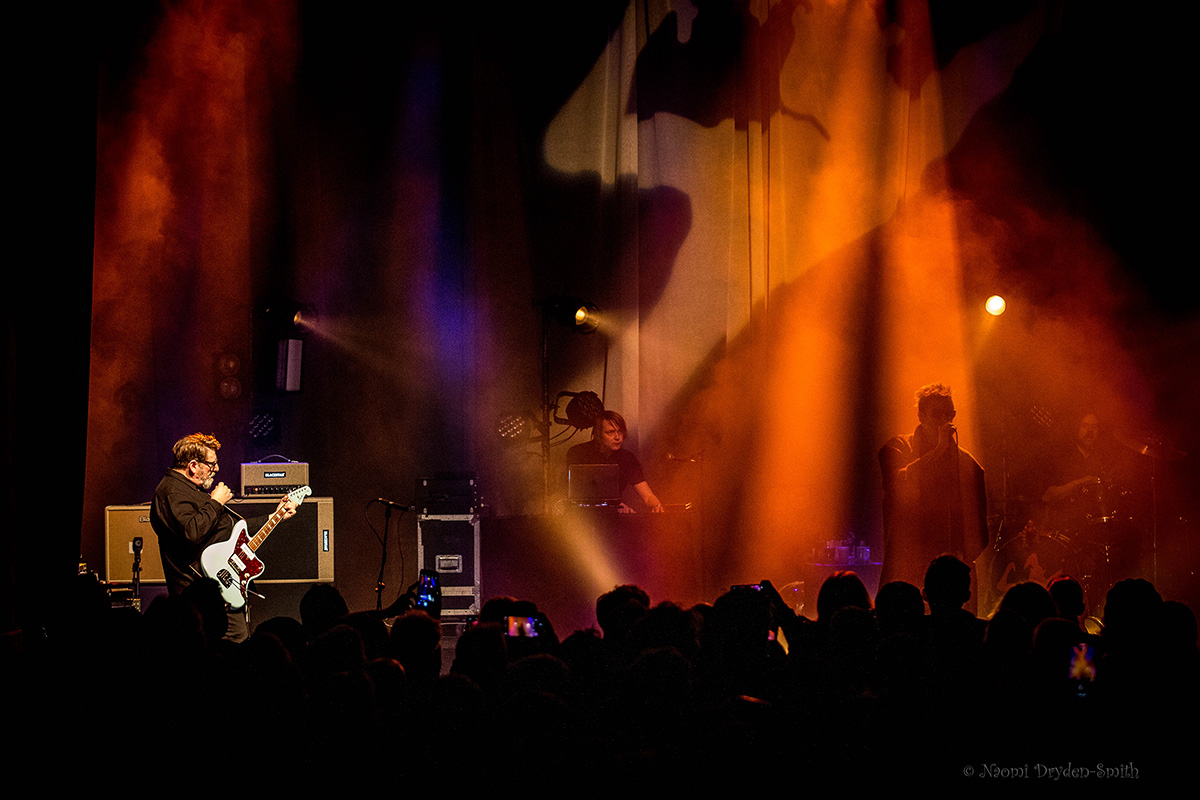 Lips Like Sugar is entwined with a daring romance, Never Stop is hopeful pop and sounds like a joyful juggernaut. New song, Brussels Is Haunted, slots perfectly and effortlessly into the classic terrain with a huge hook and the attendant drama and mystery of classic Bunnymen as it chugs along its VU groove sliced effortlessly by the Sergeant. Killing Moon is stripped down to its bare bones and, again, is aided by a 1600 strong audience choir that somehow retains the song’s beauty and delicate drama. It was never an idle boast that this is one of the greatest songs ever written – it just is. It’s also a restless anthem which sees that every gig the classic shape shifting into something else.

That’s the trick isn’t it? Post/punk, future/modern, classic/new…never stop, restless, make the familiar sound like the future – only the finest of fine wine bands know this. The rest knock out their hits.

Because they keep moving and finding something in the these songs, emotion in the landscape and nuance in the noise, The Bunnymen feel permanent in our landscape. They are from the past and yet of the now and already moving on shaping their future. Their music somehow makes more sense in 2022 than it did when it emerged.

The Bunnymen are still the future tense. 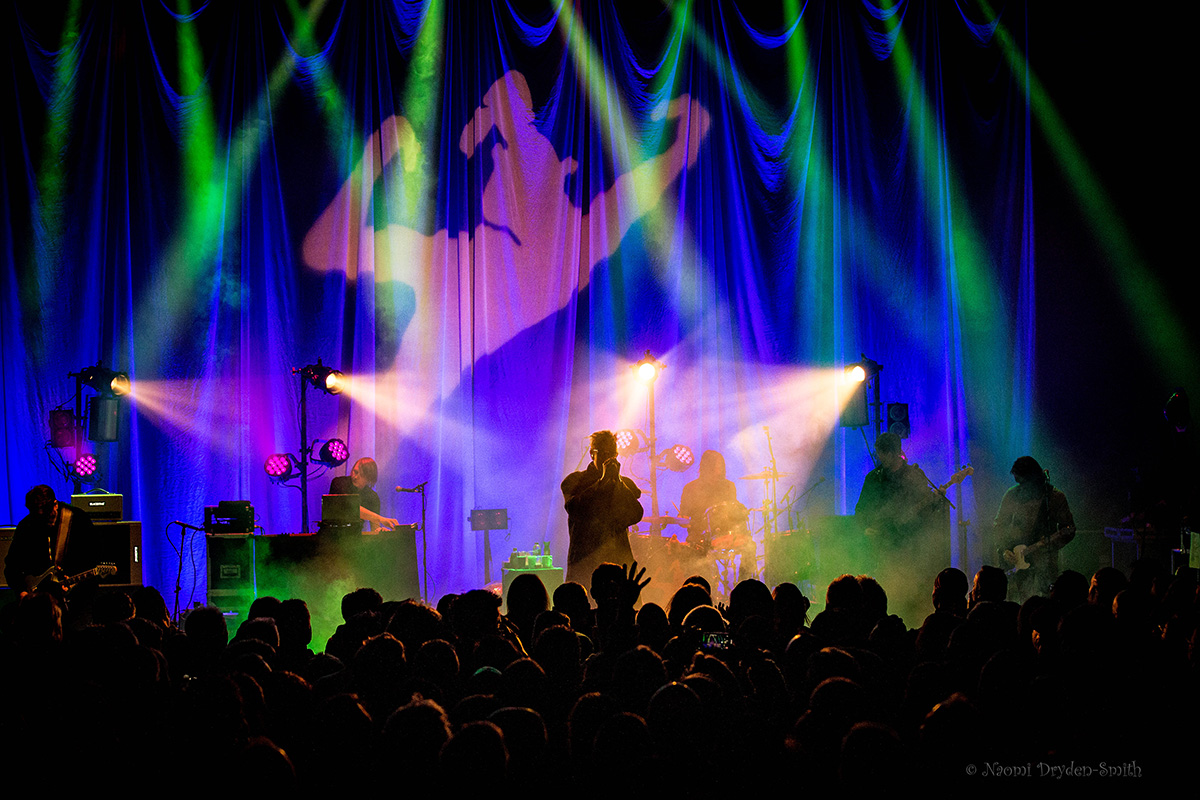