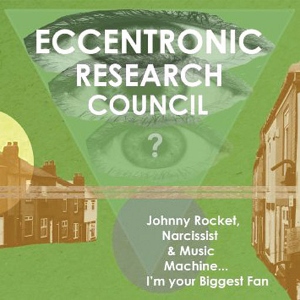 The album by Eccentronic Research Council starts with theatrical electronica by Adrian Flanagan and Dean Honer, overlaid with a narrative articulated by the wonderfully northern Maxine Peake. We are introduced to the imaginary Yorkshire town of Valhalla Dale, a dead-end, dead beat, ex-pit town. As with all ERC output, the devil is in the detail. When we are told of grim farmers who retrieve the bricks from sacks of drowned kittens for re-use, we are given a description of the place and its people which could not be bettered by the use of a thousand words. As ever, then, the sheer brilliance of the text, penned by Adrian Flanagan, is sets Johnny Rocket, Narcissist & Music Machine…I’m Your Biggest Fan apart.

The world ERC create is the one we inhabit, yet is bizarrely separate. This is a world where small-time, would-be rock stars in grim post-pit towns with ornamental aquaria made in main street pot holes, wear tin foil at their working men’s club gigs. A mythical land where your everyday, small time stalker and all round deranged fan is the bastard love child of Thatcher the milk snatcher. This is the world ERC have created, the mystery of the ordinary, a folk lore of the solid, terse north, complete with its own anti-hero and anti-heroine, tongue-in-cheek humorous, yet as mythical as Tristan and Isolde.

ERC also produce their own unique style of electronic excellence. They have created a niche of their own, an impenetrable fortress of sound. There is, on occasion, a bombastic element, a carnival bravado, yet at other times the music speaks the language of restraint. ‘Sweet Saturn Mine’ has garnered acclaim as a stand-alone single, yet it is the musical hyperbole of tracks such as ‘Welcome to Valhalla Dale’ and ‘Introducing The Moonlandingz (the audience on trial)’ that characterize the creativity and originality of the album. The general electronic meandering of ‘I am merely a flute lament in the mind of a nuisance’ and ‘Claptrap Dreams’, the sweet melody of ‘The John that fell to Earth’ and the circus feel of ‘The Cooper Effect’ all add to the remarkable diversity of sounds and styles found on the album.

Adrian Flanagan and Dean Honer seem to achieve this musical individuality with ease. It’s hard to reference or compare the sound, hard to pick out musical influences, the only discernibly comparable moments being the nightclub disco thump during ‘Johnny’s spirit guide did not send for you’, a thinly-veiled, autobiographical account of the time a band Adrian was in played Korova in Liverpool the night it burned down. In fact, according to interviews with the band, much of the content is based on real-life occurrences transposed onto an imaginary backdrop, making it a rather chilling study of obsessional behaviour at times, with only the levity of Adrian Flanagan’s words softening the impact.

The contribution of Lias Saoudi and Saul Adamczewski, masquerading as The Moonlandingz, is an interesting and vital part of the proceedings. Whilst not being their finest work, the addition of a ‘real’ band to bolster up the fictional world, adds to the album as a whole. ‘Lay Your Head Down on the Road’ is a fine track and a fitting end to this excellent body of work.

Whilst I don’t think Johnny Rocket, Narcissist & Music Machine…I’m Your Biggest Fan has bettered 1612 Underture, one of my favourite albums of recent years, it has certainly equaled it. For fans new to Eccentronic Research Council music, lured by the involvement of Lias and Saul Fat Whites, I suggest you take the time to acquaint yourself with their back catalogue. This album is just the latest nugget mined from the rich vein of creativity running through the minds of ERC. I can promise you, you won’t be disappointed.

All words by Roxy Gillespie, find her Louder Than War archive here.