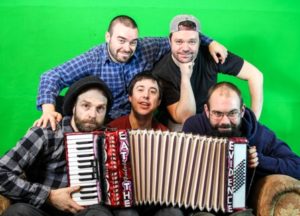 Louder Than War today premier the brand new single by London’s ska-punk outfit Eat The Evidence. ‘Sicky Slip’ is the band’s ode to roadie Steve who last year managed to slip and fracture his ankle at Boomtown.

‘Sicky Slip’ is not only a ska-punk-goes-emo tribute to Steve’s ordeal – one that swiftly trashes its olde English folk intro for an onslaught of energised overdrive – it’s also a nod to the trials and tribulations of every roadie. These unassuming employees rarely get acknowledged, unless, as in this case, they do serious damage to others or themselves.

Speaking of their roadie, Eat The Evidence’s Tom says:

“He won’t be there when we need him the most but he still regularly boosts the morale of the band – if only by bringing us tequila mid-set. So it’s nice to give him some recognition. Steve’s foot took some time to heal but he is bouncing around now and ready for this year’s festival season.”

The band are celebrating the release of ‘Sicky Slip’ with a live gig on Saturday 27 April at Bones & Pearl Studios, London N15.