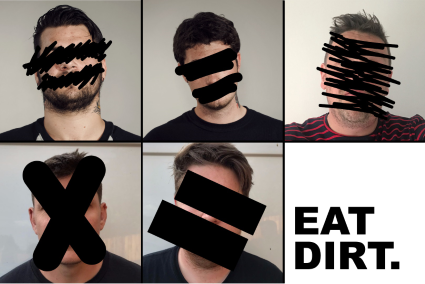 Eat Dirt. are a punk rock band from London, England. Who Eat Dirt are, well that currently remains a mystery.

A four piece formed in late 2016, Eat Dirt’s members are a collective made up from several well renowned UK bands, coming together over a mutual frustration of the way politics and life are spiralling out of control.

Musically, Eat Dirt state their influences as The Bronx, Every Time I Die, Gallows and Comeback Kid, however they have built a recklessly unrelenting punk rock sound all of their very own. Eat Dirt don’t care for industry politics, have no intention of pandering to anyone nor hold any desire to ‘make it’ as a band –  they simply want to play punk rock, have fun and release that pent up aggression.

Eat Dirt have put their united frustrations together for the debut 4 track EP entitled EAT DIRT – I, an intense and visceral blast of forceful punk rock. The message: these guys are frustrated and angry and don’t intend to hold back. This honest and stripped back EP is pure punk rock. The EP completes at just under five minutes and has been brought together with the expert production skills of Justin Hill (ex-Sikth). EAT DIRT – I is out now and available for free through this link as well as the usual digital platforms.

You can catch Eat Dirt live on 04 August 2017 at the New Cross Inn, London where the band with PEARS, On a Hiding to Nothing and Cereal box Heroes.