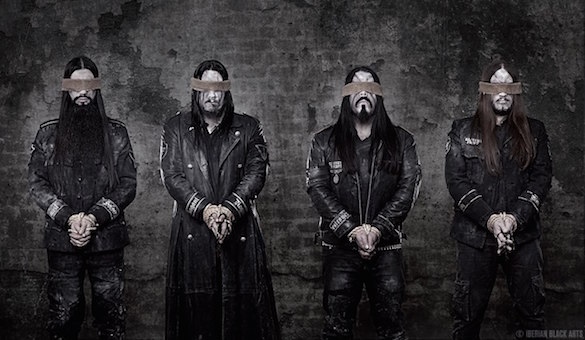 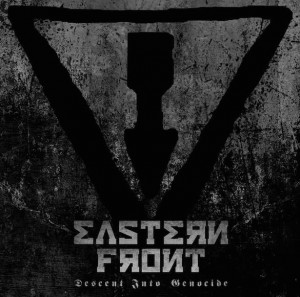 UKBM band Eastern Front formed in back in 2006 with a view to taking a new approach to Black Metal. They’ve just released their second album of what they term “War-Torn Black Metal” which Andy Santiago reviews for us below.

I struggle with the traditional concept of a ‘hell’, a great fiery pit where winged demons torment the souls of hapless sinners for all eternity. It’s all too much of a fairy tale for me.

However, there is a concept of ‘hell’ I can understand, a Hell present on this very earth and created entirely by the seemingly inbuilt destructive nature of mankind, that hell is the hell of war.

A lot of Black Metal bands have followed the well-trodden (left hand) path of using Satanism and all things ‘evil’ as subject material since the very blackened dawn of the genre but Ipswich-based Black Metallers, Eastern Front have chosen a different subject to inspire. No fairy tales for this band, the reality of the savage, horrific events of the World War 2 provide the very foundation of Eastern Front.

Formed in late 2006, Eastern Front released their debut album ‘Blood on Snow’ via Candlelight Records in September 2010 to great acclaim from both the Metal press and the underground, extensive touring and numerous festival appearances with all the big names in the current Black Metal scene followed.

After some changes within their ranks, Eastern Front recently released their second album entitled ‘Descent into Genocide’, again through Candlelight Records.

The opening track ‘Retribution Sky’ kicks off with a sample of wartime music and the sound of aeroplanes before the usual all-out Black Metal assault of blasts and screams. I particularly like the guitar riff that has an almost Suicidal/Depressive BM vibe going on that reminded me very much of Denmark’s Make A Change… Kill Yourself‘.

‘The Hanging of Faith’ and ‘Blitzfreeze’ come like a boot to the head, frantic riffing , relentless blasting and a quite superb vocal performance from Nagant, varying between guttural rasping to harsh screams. The changes in tempo keep up the interest factor and occasionally delving into quite melodic territory, particularly towards the end of ‘Blitzfreeze’ creates a good balance between aggression and subtlety.

‘Katyn Forest’ opens up with an acoustic passage and distorted spoken word before giving way to an almost 8 minute borderline progressive epic. Numerous changes in tempo, vocal styles and dynamics climaxing with a deafening gunshot make this one of the highlights of the album.

The title track follows the same blueprint with a magnificent mid passage and yet more of the driving, melodic riffing. Weighing in at over nine minutes it shows Eastern Front are not afraid of lengthy compositions and keep enough variation in their song writing so as to avoid tracks just becoming generic blast-fests.

The instrumental ‘Die Riese In Den Tod Part 1’ provides a moment of respite to build atmosphere with acoustic guitars and military drumming.

‘Ghouls of Leningrad’ is a more thrashy affair and never slows down over its rather short duration of just less than three minutes.

Album closer ‘In Memory of the Fallen’ starts with a ponderous intro that breaks into some glorious mid-tempo riffing and almost choral vocals in some parts, working well in contrast to the harsher vocal stylings.

I’m sure that some Black Metal ‘purists’ would be dismissive of Eastern Front. They aren’t re-inventing Black Metal or really bringing anything vastly different to the table. BUT, what they do is done excellently. Whilst it maybe a little polished for some tastes, ‘Descent into Genocide’ is nevertheless a good, solid record that the currently thriving UK Black metal scene can justifiably be proud of. It shows great progression from the debut, ‘Blood on Snow’ and rather than just employing an orthodox Black Metal sound, the wider spectrum of Doom, Death Metal, Classical and even a hint of Folk present on this album shows a willingness to develop and experiment, something I’d like to see explored much further on any future recordings.

~
‘Descent into Genocide’ is available now on Candlelight Records and in all the usual places.

The current Eastern Front line-up is:

All words by Andy Santiago. More words from Andy can be found at his Author Archive.