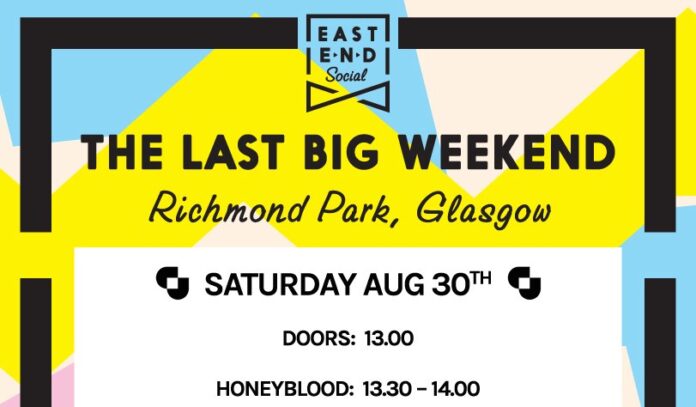 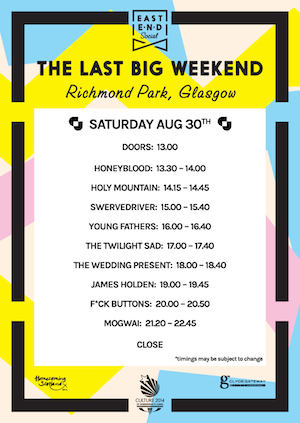 East End Social and Chemikal Underground Records have been curating a number of events in the city over the last few months and this festival (my preview here) was much anticipated even if it was oddly low-key in the advertising and publicity department. I had attended a couple of their prior shows at one of which it was pointed out to me by a friend who was loosely involved that they seemed to have been organised by “enthusiastic amateurs at best.” What a portent that was.

The organisers of East End Social / The Last Big Weekend, it has to be recognised, should  be applauded for taking the time, effort and risk in putting on artists known and less-known in hitherto uncharted territory. The grand finale was this two-day event in Richmond Park which to my eyes, was much more poorly attended than anticipated. I believe the capacity was seven thousand; I doubt there were half that total there on the Saturday for Mogwai and a supporting cast.

Arriving at the venue, friendly security (an oddity in itself in Glasgow) were shepherding a trickle of people through the gates. Two local lads (who were clearly not your typical Mogwai fan) in tracksuits and baseball hats were being huckled out at the same time by said security. One of these fellas was laughing about “jumping in” and it transpired that some of the East End’s actual populace (as opposed to the brogues / espadrilles / city-beard-looking majority of the crowd in the venue) had attempted to avail themselves of the opportunity of free entertainment via the small surrounding fences.

The arena is a pretty small affair. One medium-sized marquee and a C-shaped grassy area. The weather was fairly pleasant and folk were sitting around on the grass taking the last of the summer air. Here’s where it all goes badly wrong.

The arena had one bar and two small catering stalls. This is for a proposed crowd of 7000. The bar facilities were provided by Glasgow micro brewery West Brewing Company. Now, I’m a fan of boutique beers as much as the next man, but when the bar is totally understaffed, and when they run out of beer at 3pm and when the staff that are there are standing pulling a pint and admiring it as it settles, it is not a good sign. West Brewing is local to me and I frequent it from time to time. It is, believe me,  notorious in Glasgow for bar and floor staff who have apparently been picked for their good looks rather than their get-up-and-go. I’m never sure whether they’ve been lobotomised or are on heroin. One can regularly ask for the bill, a fork or another drink three or four times in the bar and not receive it. So, in an absolutely no surprise scenario, this appeared to be the not-an-actual-piss-up-in-a-micro-brewery I anticipated when I spotted the West Brewing logos. The queue for a drink was over 90 minutes for most people. The food queue was little better and I saw the staff scoring items off the menu blackboards, having ran out of supplies at 3pm. Apparently there was no vegan option either. Basically, this meant people ordering three or four drinks each at a time, missing bands and spending their time (and their hard-earned seventy quid admission) standing in a queue.

Fortunately, given the type of crowd, this was unlikely to turn into Glasgows Altamont, but at times on Saturday I wished it had. Achingly awful.

Now, Glasgow is a city very used to staging events. Jesus, we ran the Commonwealth Games a month ago. For EES to have botched this so badly is inexcusable given the amount of advice they could have taken about running what was, let’s face it, a pretty small event. I heard some of Swervedriver and all of  the much-loved Wedding Present whilst standing in queues.  They did, to be fair, sound great but I can’t actually review them as I didn’t actually see them.

Eventually getting my dehydration sorted, I meandered into the patchily-filled tent to see James Holden. This is a young man who’s dark electro reminded me of very early Human League (the Being Boiled / Empire State Human era) although I felt that the live drummer and sax were somewhat extraneous. It was odd to see a crowd of hipster-types nodding along to music played by a hunched-over youth that would have been so much more suited to an audience of E-ed up hooligans having it large. Maybe the security shouldn’t have thrown out the boys mentioned earlier. Funny, but it occurs to me watching Holden that Mogwai, despite the East End base of ops, have a little bit of a smug, sneering attitude towards Glasgows “neds”. (A ned, if you’re unfamiliar, is what is known as a chav south of the border). Take the album titles; Mogwai Young Team is taken from a Glasgow gang slogan. Hardcore Will Never Die (But You Will) was apparently something a band member witnessed a ned youth shout at a shopkeeper who refused to serve him alcohol. All very funny if you’re in the know but maybe a bit on the patronising side given the supposed inclusivity of the organisation.

To Mogwai. Now, before I start, I should attest that I like (if not love) their albums. The continued refusal to play the media game and their single-minded approach is admirable. They clearly love music and they seem like nice, thoughtful and clever blokes. I hadn’t seen them live before and I was looking forward to this one. I’m sorry to say I found them hugely disappointing. They are clearly in the same ballpark as Sonic Youth but where Thurston, Kim et al had danger and sex, Mogwai have none whatsoever. A group standing rooted to the spot (obviously apart from the drummer and keys man) who’s main focus appears to be extreme volume confused as energy. Watching the band play, most of what they do, to me, seems to be a triumph of effects pedal over substance. The melody seems to be carried by the keyboards and the guitars simply echo, reverb and chop at each other with varying levels of dissonance. Looking round the tent, I see a fair bit of yawning amongst the nodding heads. I did like the section they played from the Les Revenants OST but it did, in the main, leave me cold. I found my mind wandering again. Was this what is was like watching The Floyd, King Crimson, Genesis back in 1974? Music that is meant to be for the cerebral rather than the hips? Maybe that’s what Mogwai do. Maybe I’m missing something, but Saturday’s set  felt like a huge yawing hole of not very much.

All words by Joe Whyte. More from Joe can be found by visiting his Louder Than War Author Archive.