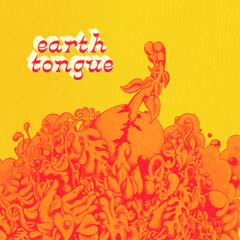 Heavy psychedelic / fuzz band who formed in 2016 in Wellington, New Zealand.  A male/female two-piece who play loud, energetic, disorientating songs, often with space and/or occult themes.  What do you get if you cross Black Sabbath with Stereolab?  Fuck knows, says Ged Babey, but listen to this Primitive Prog -it’s crazy cosmic jack!

Sometimes music is supposed to feel weird and indescribable. It’s the moments of clarity within the dense, sonic mess that often feels the most satisfying. That’s the space that Earth Tongue occupy. At times, their songs are shrill and disorientating, other times their reverb-washed textures and instantly-familiar hooks can wrap you in a warm, loving embrace.

Now that is a good description, from the bands press release.  Another two piece band -drums and guitar, re-writing the rules and making Prog-influenced music sound simultaneously pop and primitive.

Named after a glutinous fungus (Glutinoglossum glutinosum) Earth Tongue consists of two earthlings:- Gussie Larkin (guitar – a master of the fuzz-smothered riff) and Ezra Simons (stunning, off-kilter drums). Both sing.  Their debut Portable Shrine EP was self-released in New Zealand but Floating Being is released this via Bristol (UK)  based independent label Stolen Body Records – home of a load of cool international bands.

Earth Tongue embrace the imperfections in their playing and recording – drawing influence from early 70s psych and prog rock. The last thing they wanted was to create a shiny, over-produced record – with that in mind, they recorded the drums to an old 8-track Tascam reel-to-reel in a friend’s garage in Melbourne. The result is a punchy, raw and fuzzy journey into psych-rock with songs that weave between melodic and jarring. Unexpected twists and turns leave the listener in a disorientated yet satisfying haze.

Had you told me I would LOVE a two piece psych band who incorporate the tropes and dynamics of ‘Prog’ I would’ve dismissed you as a fool – but I do adore this album.  Maybe it’s because I’ve never listened to Prog before properly – or maybe this is a band using old ideas in a fresh new way, or maybe they are just accidental geniuses.

It’s a loud, heavy album but with tuneful as well as full-on screaming vocals. The fuzzed-up guitar sounds and complex yet primitive drumming reminds me of L7 and their brand of Ramones meets Black Sabbath genius but the female vocals have the feel of Stereolab.

Floating Being took me by surprise as I listened without prejudice and without knowing anything about them – and was captivated and blown away on first listen. ( I asked a fellow writer what he thought and he was decidedly underwhelmed and meh’d).

The lyrics are curious and you get the gist from the song titles alone: Microscopic God,  Probing The New Reality,  Hidden Entrance, Unseen Tormentor, Astonishing Comet, The Well Of Pristine Order, Portable Shrine,  The Dome and last, but not least, my favourite title which is surely an old Dr Who episode, Sentient Sediment.

All sound like chapters in a sci-fi fantasy novel and the album is like a beautiful hermetically-sealed world of its own.

With influential hard rock greats like Black Sabbath and Hawkwind well into old age it is brilliant that Earth Tongue are breathing new life into the genre and making it fresh and exciting again.

All words Ged Babey (except press release content in italics)