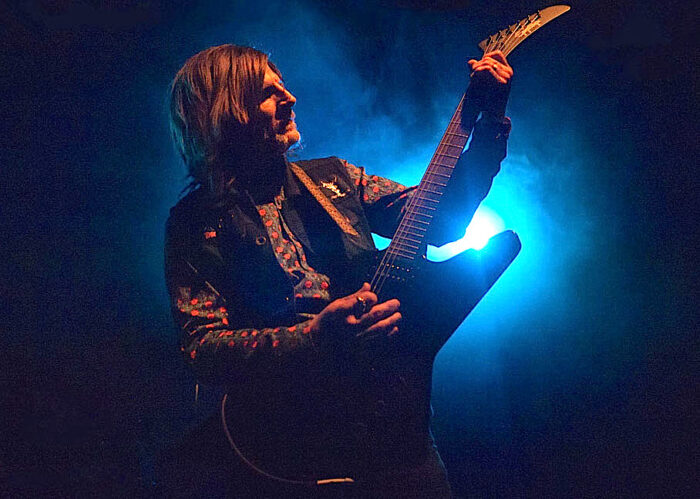 Of course it hangs in the air.

Everyone in the room is muttering and wondering.

Earth deal in a music that is so perfectly American that the last time we spent a week driving through Washiungton state surrounded by the mist and rain and the damp and the cold they were the perfect soundtrack. Those drone and mystical guitars, the heavy and beautiful melancholia in the sound lingering in the air – it was like being in the perfect film.

Tonight they play many of these songs and the live setting adds even more nuance and life to their music. The band, who were formed by Dyaln Carson, Kurct Cobain’s best buddy, took a very different trip than Norvana – they were creating a whole new style of music with elongated drones with the stench of early Sabbath grinding around the beautiful noise.

When the drugs got too much Dylamn avoided being a casualty and bailed out only to return a few years later with the same atmosphere imbued by added extra textures of blues and dark country, of landscapes, soundscape and filmscapes to create astonishing albums of space and sadness.

Live they hone this down to a perfection, the bearded Dylan’s guitar seems to hang in the air physically as he plays it above his head with the neck vertical or sonically with each note counting. As he descends down the neck every change is underlined and each descend is an avalanche of emotional skree.

Allied to this is Adrienne’s astonishing drums – she plays in slow motion with her sticks and hands arcing slowly through the air to connect with the kit for the perfect crunch. It’s like James Brown’s famous ‘one’ slowed down to a new kind of groove and it hits you that groove is what makes this band so perfect. This is their own grinding groove – a below the heartbeat grind that is so perfect that it pulls you in and hypnotizes you into its spell. The Earth groove is slow and sure but your body sways to the eternal and for more than an hour you are flowing in their space – it’s a chemical rush.

Each song is a magic spell an electric take on a nether world. Earth deal in mysticism and are electric warriors operating in their own zone and all at once are a peak back to the creative spark of late eighties Seattle retaining the possibility of boundary breaking rock with an electric raga and a.cranked ancient folk and blues mashed into something quite holy and very different.