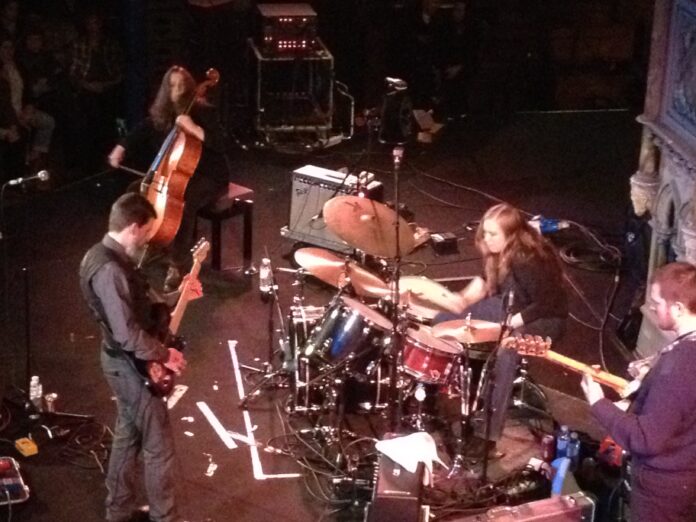 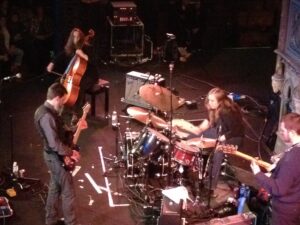 I knew nothing about Earth when I agreed to review them.Ã‚Â The press release spoke of “freely improvised/folkloric”Â and “spontaneous composition”Â and that sucked me in.Ã‚Â It wasn’t until the day of the gig that I actually listened to them, on a train at 9am after a late night on the South Coast.Ã‚Â It wasn’t what I expected.Ã‚Â Firstly, the songs all seemed to last forever and there were no vocals.Ã‚Â In for a penny, in for a pound, I thought, but wasn’t entirely sure what I was letting myself in for.

For those who don’t know them, there’s four of them, lead by veteran guitarist Dylan Carlson, best known outside the band for being a close friend of Kurt Cobain, and accompanied by cellist Lori Goldston, drummer Adrienne Davis and bass player Karl Blau.Ã‚Â  With an ever-changing line-up with Carlson as the constant, they’ve done seven studio albums to date since 1993.

Opening support act, O Paon, is a French-speaking Canadian, whose “band”Â, as she calls it, consists of herself.Ã‚Â  She uses a looping pedal to good effect on both her guitar and vocals to create a sound that’s slightly unsettling, more so as she’s singing in Canadian French, which makes it difficult to understand what she’s singing about.Ã‚Â  Despite all that, it’s actually rather good.

Next up is Mount Eerie.Ã‚Â  My appalling lack of research led me to believe this would be a band as well, but it’s a gentleman by the name of Phil Elverum and his guitar.Ã‚Â  He plays songs from two albums he has coming out later this year, ‘Clearer Moon’ in May and ‘Ocean Roar’ in September.Ã‚Â  Rather than the polite acoustic strum you get in the Chapel, he’s loud and uses the effects pedals to make a sound louder than you’d expect from one man.

Earth sort of saunter on stage, plug themselves in and start playing.Ã‚Â  There’s no big introduction other than to ask people not to use flash photography, and that sets the scene for their set, which is devoid of gimmicks or much in the way of crowd or band interaction and focused solely on the music. The set covers seven songs in just under an hour and a quarter.Ã‚Â  It focuses mainly on their recent album Angels of Darkness/Demons of Light 2, but the set goes as far back as 1996’s Tallahassee and 2008’s The Bees Made Honey In The Lion’s Skull, whilst incorporating two new songs at the start and as the encore. They’re intriguing to watch.Ã‚Â  Whilst there’s no obvious chemistry visible on stage between the four of them, the broody atmospheric music comes together perfectly as if there’s an intuition there that pulls it all together.Ã‚Â  At one point, it looks like the Adrienne is anticipating Dylan’s next move, rocking backwards, ready to come in.Ã‚Â Ã‚Â  For most of the set there’s not even eye contact between Dylan, Lori and Adrienne.Ã‚Â Ã‚Â  It doesn’t need it either, as the press release promised, despite the length of the songs varying from their recorded versions.Ã‚Â  The crowd are drawn in and there’s no talking anywhere whilst the band are playing, all eyes are transfixed on the stage and the reception they get at the end of each songs tells its own story.Ã‚Â  As a casual new observer of the band, I almost feel like I’d been let into an age-old secret.

It’s not something I would usually go for, but I found myself at the merchandise at the end of the night, picking up the latest album.Ã‚Â  I think that’s probably the best recommendation you can give a gig. Earth played an untitled new track, Multiplicity Of Doors, His Teeth Did Brightly Shine / The Corascene Dog, Tallahassee, Rakehell, The Bees Made Honey In The Lion’s Skull and Badger.