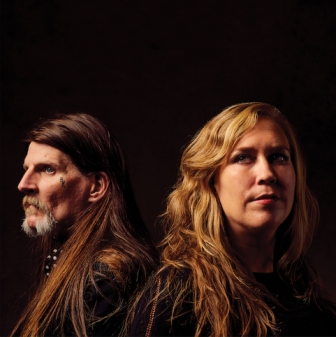 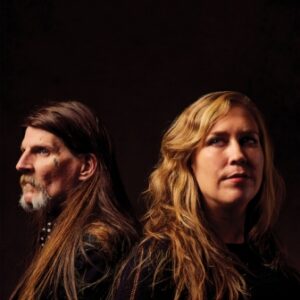 Earth: Full Upon Her Burning Lips

Stripping away members and instrumentation back to the core duo of Dylan Carson and Adrienne Davies and entering the studio with no preconceived notions of narrative arc, Earth return with one of their most entrancing albums to date. Simon Tucker reviews.

Listening to Earth is a singular experience. They may walk into the same worlds as other bands and you may spot a little hint of influence coming through into their work but it is just that, a hint for Earth is a band that describes the world we are living in so wonderfully without the need to utter a single word.

Full Upon Her Burning Lips is a return to the original ethics of Dylan Carson’s vision. The album, stripped of excess and played by Carson and percussionist Adrienne Davies, is raw mentality and emotional connection. The singular simplicity of its instrumentation allows for the duo to walk a tightrope where you they could easily fall into the void of extreme exposure or meandering self indulgence. Of course this never happens as well…this is Earth.

When Iggy Pop started the Stooges he wanted to create a white mans blues and to mirror his industrial surroundings. What Carson and Davies do here is to take that idea and shape it into life. This is music dragged from the clay and the dirt. Forcing a meditative and focused state into the listener. Apparently this was an album created from bits of ideas and with no main narrative framework for it already in place but it never once feels tacked together or disjointed. In fact, Full Upon Her Burning Lips flows wonderfully. From the cyclical opener Datura’s Crimson Veils which utilises a circular guitar motif and drum pattern before we notice subtle elements being added as the track progresses (the ending where all you are left with is what sounds like a humming synth is a lovely conclusion) to closer A Wretched Country of Dusk we are treated to an album that plays out like someone explaining the feelings of many Americans to us on the outside. The recording nature of just playing and focusing on certain bits and pieces that were around before adds an emotional edge to the record as you get a true sense that this music is what had to be played and had to come through the hands, hearts and minds of Carson and Davies. Nothing forced. Only natural instinct allowed.

Full Upon Her Burning Lips also examines the more supernatural elements of roots culture with Maidens Catafalque being the pinnacle as it echoes and shimmers around, never solid or rooted to a spot. An almost lysergic edge lies at the heart of this song with guitar delay and echoes of drums leaving traces as the pass. The Mandrake’s Hymn also pushes forward this thematic thread of “otherness” but whereas Maidens Catafalque was abstract and smudged, this time we get a striding and bold production with a main riff that grooves and seduces. The Mandrake’s Hymn is the most upfront and direct of the songs contained on the album making it the anchor the whole project needed.

The decision to strip back any superfluous instrumentation has paid off for Dylan Carson and Adrienne Davies as Full Upon Her Burning Lips feels more direct and immediate that the last few Earth albums. The way the album plays out feels like a dance between guitars and drums with neither one overpowering the other. Harmonious, beautiful, powerful and full of statements that it is up to the listener to find, this is an album for our times created with a true sense of what has been before and will be in the future. True Earth music.