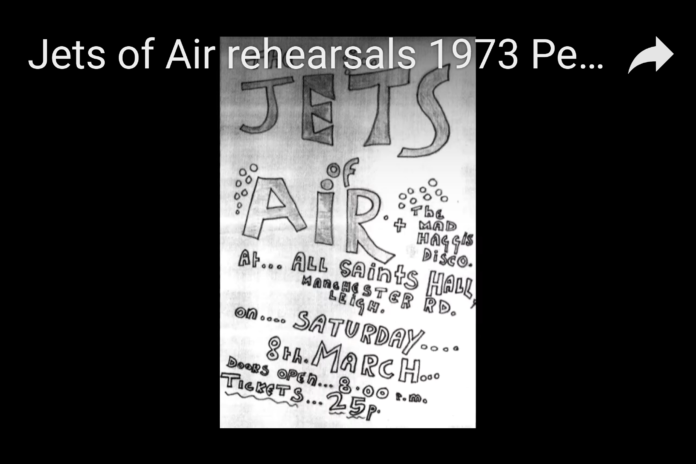 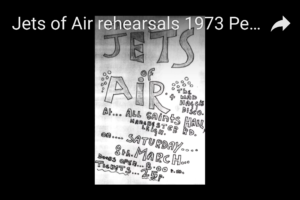 This is fan-tastic. A real buzz-cock!  A teenage Pete Shelley enthusiastically yelping his way thru Ziggy, Bowie and Velvets songs, and a couple of his own, in a barn in 1973 with college pals.

This really is one of those finds which is of huge historical interest to fans and punk ‘anoraks’. Proof, if needed, that Bowie, or rather the Spiders From Mars and the Velvets were a primary influence of punk.

Jets of Air consisted of Pete Shelley on guitar (who was then known by his original name McNeish), Tony Wall on guitar, Steve Christie on drums and Garth Davies on bass.

Jets of Air played a handful of gigs in the north of England up until when they split on the 23rd May 1975. This flyer may therefore be for the last gig the band ever played. Six months later Pete Shelley would meet up with Howard Devoto at the Bolton Institute of Technology and the rest, as they say, is history.

This is a flyer for a gig at All Saints Hall, Leigh, Manchester on Saturday 8th March 1975.

According to the Guardian obituary:

He formed a group called Jets of Air, the name inspired by a college lecture on Newtonian physics, and while “we played only about six gigs in three years”, Shelley built up a stockpile of songs…

The bulk of the songs here though, are cover versions…

Posted by ‘Decor Records’ on what would have been Shelley’s 65th birthday, Chris Metzler (who used to work with Buzzcocks back in 1989 and was good friends with Pete…) said:

Here are part of Pete Shelley’s first known recordings from Sept 1973 made during a rehearsal at Joe Naylor’s Farm in Leigh. The recording features future Buzzcocks’ bassist Garth Davies with Steve Christie on drums, Tony Wall on guitar and 18 year old Pete on vocals and guitar. The recording features two Pete originals, ‘I Just Can’t Live’ which was never released and ‘Telephone Operator’ which wasn’t released for another ten years till his second solo album XL1. These recordings also include four Bowie covers plus the Velvet’s ‘White Light/White Heat’. Pete gave me a copy of these recordings in 1989 from a cassette so this would be third generation, not good enough for release but Chis Hartstonge did a great job making the even worse tape sound better with his transfer and remaster. I do not own these recordings. Happy 65th to Pete, RIP

Great to hear after all this time.  God Bless you Pete.

Thanks to Chris Metzler for giving us permission to share.