Home Music Reviews Album Reviews Earl Brutus: Your majesty we are here / Tonight you are... 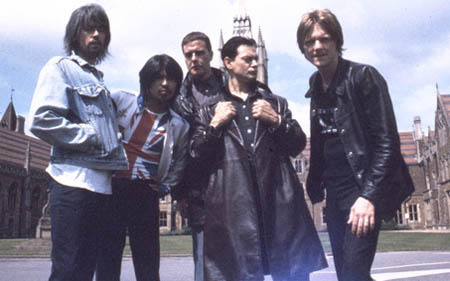 Earl Brutus:  Your majesty we are here / Tonight you are the special one

Louder Than Wars’ Ioan Humphreys re-acquaints himself with 90’s also rans Earl Brutus and gets the shock of his life.

Hindsight is a wonderful thing isn’t it? I am ashamed to say that Earl Brutus passed me by in the 90s. However, I was well aware of them. And via the NME and Melody Maker, I got to know about their unhinged and often chaotic live shows. To be honest, I was probably a little scared of them. I was young and naïve! Not that I was into anything better I may add. I have enough musical skeletons in my closet. But to be honest, as the years have gone by and having the privilege to listen to these re-issues over the last few days, I realise I made a massive error in my 20s. I really should have been listening to Earl Brutus.

First off, we have Earl Brutus’ Debut album ‘Your majesty we are here’. When listening to the whole album, the first thing that hits you are the IDEAS! In fact the whole four albums contain a dizzying amount of ideas. These influences range from JAMC noise to Kraftwerk minimalism to abrasive guitar riffs to blissed out electronic. There seemingly wasn’t a genre that Earl Brutus weren’t afraid to tackle!

I genuinely think that we (the world) wasn’t ready for Earl Brutus. They were sampling and making socioeconomic/sociodemographic statements years before Sleaford Mods were toddling towards Glastonbury with a nicotine stained tippy cup. This band had it all. Abrasive guitar sounds. Abrasive electronica. Abrasive vocals. Abrasive attitude!

For their 1998 follow up ‘Tonight you are the special one’, again Earl Brutus use their aggressive, abrasive and confrontational style to drag and suck you in to their nasty plan. They have riffs, attitude and theatricals. The intro into track ‘East’ should probably have the Kaiser Chiefs lawyers quivering a bit! Just saying like… Also, it is an epic track! It feels very sad that these tracks are lying here waiting to be either discovered, or ignored again.

Ignore at your peril I say. Across the two album re-issues, along with the two albums worth of extra stuff, there is no way these tracks are throw away. They belong on a major release.

The Mark E Smithesque megaphone delivery is either hard to ignore or lazily comparable. It’s hard to get away from the comparison, but it’s there. But there is more. The ideas just don’t stop! I can see where PWEI fit into the story. But, The Prodigy? Blur? Pulp?… Absolutely!

This band just did not give one shit one bit!! Modern day’s equivalents have to be Fat White Family? But, again this is lazy. Across the two album reissues (and two albums worth of excellent add ons (absolutely no filler!!)) Earl Brutus had enough balls and swagger for umpteen bands, but somehow did not ride the wave. They were waaaaaay before their time. But, they would be absolutely forgiven today! This is not unusual! It may have been back in the 90s, but this is definitely the time for misfits. And even though Earl Brutus ceased to exist around seven years ago when their lead Nick Sanderson sadly died of cancer, the greasy, sleazy and downright wrong elements of Earl Brutus still live on and exist in ‘The Pre New’ and they should be encouraged and preyed upon. They have one hell of a legacy to live up to.

The Earl Brutus reissues are currently available to order on loop Music https://www.3loopmusic.com/. More from The Pre New can be found on Facebook