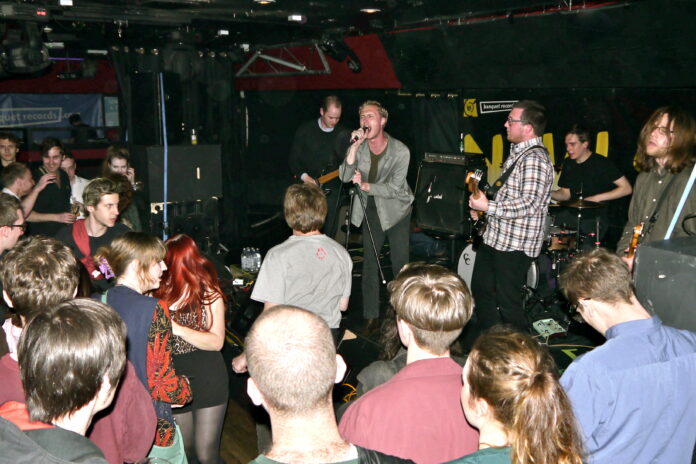 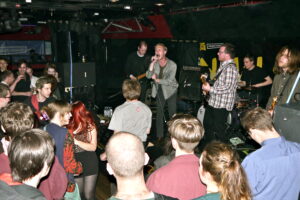 Cureish chords, Bauhaus basslines, Tom Clarke from The Enemy’s vocals… Initially Eagulls are an off putting listen, though it seems the shameful Generation Y trait of listening to music through laptop speakers is far more to blame than any lack of talent.

Two bars into tonight’s set and it’s obvious that the true bite of their music lies within those tones and frequencies the space between your keyboard and screen can’t deliver. Opening with Nerve Endings, the immediate impression is that this is what Dinosaur Jr might have sounded like had they come from the English post-punk scene of the early 80s, which is no bad thing.

In many ways they are the definition of alternative rock. The antithesis of that fucking dreadful Rock Night documentary you may have regretted seeing on Channel 4 last December, nothing they do is for show. They dress plainly, behave themselves on stage and are even sensible enough to take sips of water between beers. And yet by no means does any of this make them dull.

Every song we hear tonight is blasted urgently through plentiful distortion and Mary Chain levels of feedback. Rarely is there any time for applause, though incidentally there isn’t much of it forthcoming. Somehow, in an age of endless online content where ‘blogosphere’ is an OED certified term, a band who in the past two months have bagged both a Letterman appearance and an NME Award can still play a show to only about a hundred and twenty people. Even the added attraction of XFM’s John Kennedy as guest DJ can’t fill the venue to even half capacity.

Those that are in attendance, though, are justifiably enthralled. Bowl cutted, denim jacket clad spectators do their level best to mosh, and frankly do a pretty good job. The set remains concise and punchy throughout and culminates in a typically ear shattering rendition of recent single Possessed. Still eager not to let a second of our attention be wasted, Eagulls waste no time in getting packed up as soon as it’s all over. There’s barely a chance to shout “more” before guitar cases start to appear, filled by the band themselves in the absence of any visible roadies.

There can’t be many guests of David Letterman still employed as their own road crew but my guess is that it won’t last much longer. With support slots booked for upcoming Franz, Suede and Manics shows, and their debut album having received near-universal praise, Eagulls look set to be an act everyone will want a piece of by the end of the year.