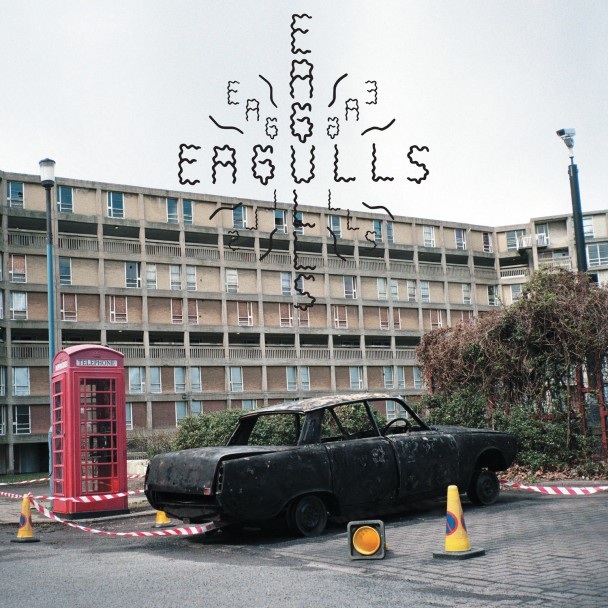 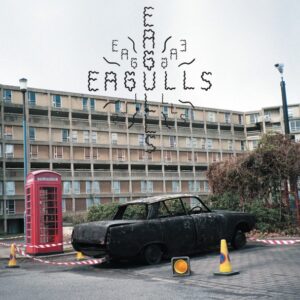 At the end of last year Eagulls announced the release of their debut album, a 10-track effort recorded in Leeds between touring and their “full-time dead-end jobs”. As long time supporters of the band we couldn’t have been happier – and if anything the end result’s exceeded our expectations. If last year was all about Savages, this year could well be all about Eagulls.

My own personal voyage into the murky world of shouty punk rock began a few months before I left school in a tiny village hall in Essex where my school pals rehearsed for months and months and eventually got to play about three gigs. They were called THE LOST and never have I looked back at them as ever being a terrible band because in those days I simply had no other band to compare them with (I’d never seen a live band at that stage). It crossed my mind recently whilst digesting this self titled EAGULLS debut that had THE LOST carried on (I have no recollection of how and why the ensemble called it a day) a few decades later this is what they may have sounded like.

So that’s four people (5 if I can get my brother to turn his laptop on) that I feel confident might now listen to this collection of tunes.

Back in the days when televisions had just three channels and you had to watch what you wanted when you were told, there were teenagers that began to get curious about guitars and drums and the ability to shout and scream, have it amplified and cause a reaction amongst the public of outrage. The average age of guitar purchasing youths was 19 and a half (I made that bit up) and by twenty these people were gigging and entertaining other like minded people and starting to think the previously unthinkable scenario that maybe, just maybe this could be a way out of (applying for) a dead end job to help pay for their booze and fags.

Fast forward to today and the anger and enthusiasm we heard back then is still prevalent today but the difference is that these people making this music have probably been playing their instruments since they were three years old (another guess) and are just as angry and maybe just as disillusioned with what the future might bring whilst at the same time, sounding gloriously massive. (Obviously the technology we have at our fingertips plays a part in this).
Eagulls, from Leeds sound like they could have existed around that time so to pick up this album and being reminded of those early Killing Joke, Magazine and even The Mob tunes but in glorious digital wide screen technicolour glitch free pop uproarious scratch free audio superaudioation (I made some of those words up) means it doesn’t matter if we’re all now losing our looks, struggling with our knees and going deaf.

Eagulls are here now and these songs sounding this huge means this could be what those still pining for the King’s Road Chelsea clothes shops have been wanting (but not really looking for) over the past few decades.

It’s an album that today’s music loving public will also fall in love with.

And it’s the perfect soundtrack to have playing at ear splitting volume forty minutes before going out on the town whilst the last bottle of Jager’ is being finished off (you’ll just have to take my word on that bit).

Previous singles Nerve Endings, Tough Luck and Possessed are great to have back in our lives again and the rest of the album follows suit.

This is the sound that disillusioned youths living on council estates in Leeds with crap jobs and no (perceived) future sound like and this sound is familiar with what we were listening to whilst wondering why Bill Grundy got the sack. This collection of tunes is well produced, well played, angry yet melodic and their anthemic punk will say more about the UK in 2014 than ….er ….thinks of popular indie band but can’t come up with anything we can all agree on.

Catching Eagulls a couple years ago or so in a tiny club in the capital made us sit up and notice then. They were angry refreshing and most importantly very entertaining. However, now…still plying their individual trades to get their city and guilds in doing fuck all whenever one can get away with it, whilst maintaining the discipline to turn up in a tiny room, practice all of this and get people like you and I to nod agreeably when they visit our towns…these snotty kids from Yorkshire have pulled off a bloody decent album that may be the key to them telling their bosses to piss off in order to be available to sit in vans all day with only each others company and a bunch of songs no one will tire of. It’s for those still visiting establishments where our ageing hero’s are returning and charging thirty plus quid to see and it’s for the same people that need to investigate and realise that there’s still good decent punk rock out here that doesn’t sound like it’s been made by goofy American college boys with Stiff Little Fingers back catalogues, grandchildren to feed and are fed up with taking their kids to the local paintball establishments just to get away from the allotment. Imagine the fast My Bloody Valentine songs but with Ian MacKaye from Minor Threat sticking his tuppence-worth in. Imagine those Siouxie and the Banshees tunes and imagine most of what you’ve heard over the past thirty five years all thrown together and sounding ace.

Actually, don’t – just get your hands on this and your ears wrapped around the speakers but don’t fret …..it doesn’t have anything about a hotel in California on it (that would just be plain daft).

Words by Keith Goldhanger. More writing by Keith on Louder Than War can be found here.