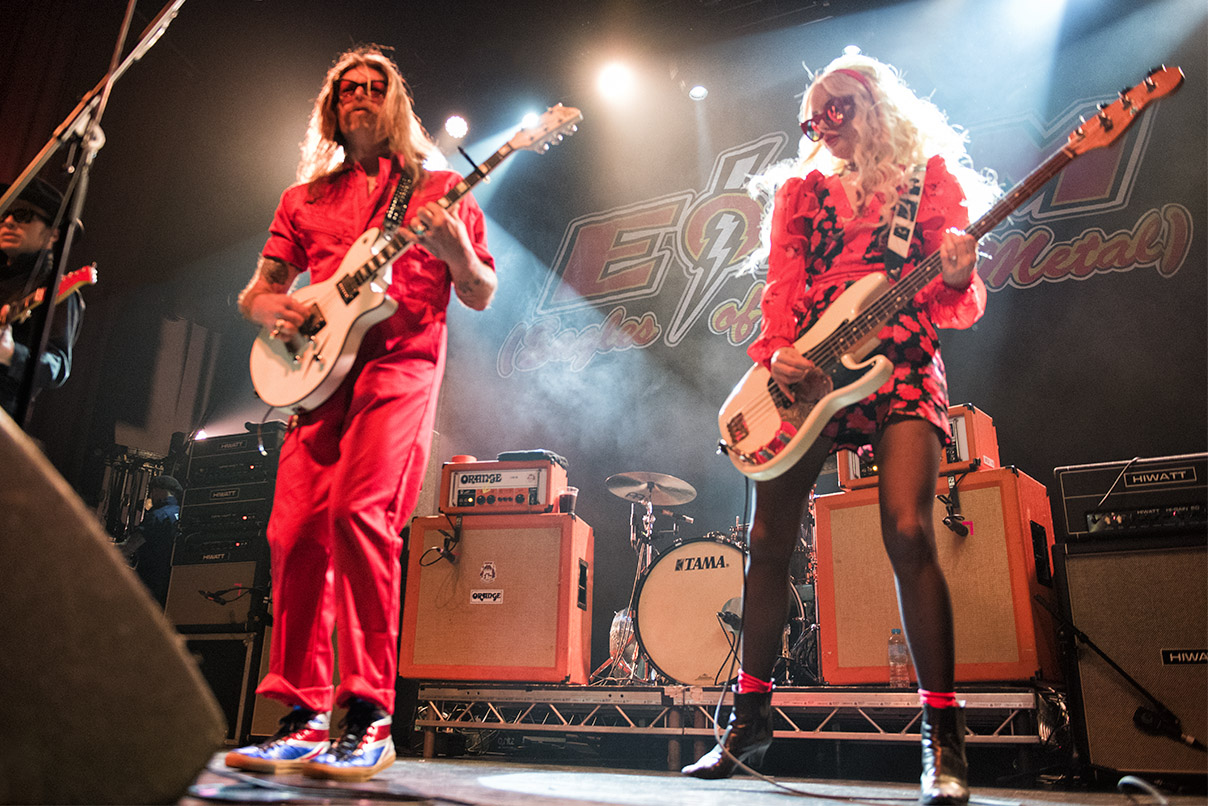 The party started here. Jesse Hughes rolled into town with his posse to rock the night and Wayne AF Carey and Melanie Smith capture the whole explosion, at a packed out O2 Ritz, ready to rock for you.

The question is: Why are Eagles Of Death Metal touring at all? No new album since the amazing Boots Electric compilation of cover versions (reviewed here) and no new material on the horizon? Who gives a fuck? It’s just exciting to see a proper rock n roll band tip up on Whitworth St, on a nippy night in Manchester. I’m in a queue to get in for Covid pass reasons yet the atmosphere is already intense and I sort of miss the ticket touts in a way. Robbing bastards, yet familiar faces just trying to make a living that changes the whole gig ritual. The presence of a massive black tour bus outside the venue just gives you an insight into what will unfold. I get a couple of young citizens walking past, asking me what’s going on tonight and I reply “Eagles Of Death Metal live”. They look at me like I’ve got two fuckin’ heads. Really? They’re probably off to an Ed Sheeran appreciation night. Anyway enough of this bollocks…

The iconic venue is filling up quite fast and the support band Bones are gearing up as I speak. They enter the stage in matching tops and create a massive blaze of duel guitar noise and stage theatrics that are second to none. Rosie Bones, Carmen Vandenberg and the drummer Heavy are straight out of Camden Town and know how to put on a show. The guitar work is fuckin’ excellent and they gel together with every note. How I’ve not come across this band yet is a mystery. Tight as fuck, great performance and a match made in heaven that brings to mind Pete Doherty and Carl Barat trying to do Motorhead. Their cover of David Bowie’s I’m Afraid Of Americans just puts the icing on the cake. A great band full of power, with an enigmatic stage presence to match. 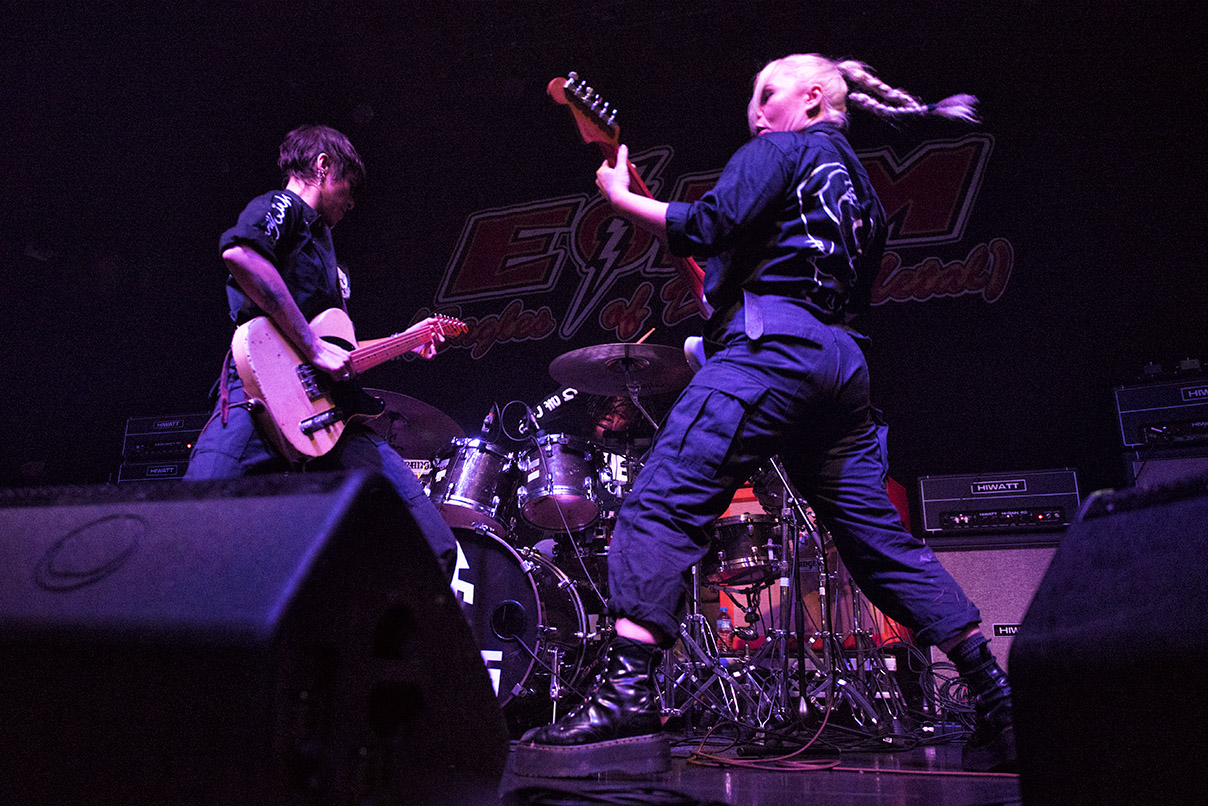 Jesse Hughes is a genuine superstar full stop. There is a lack of decent rock stars nowadays with no identity or show off tactics and he’s there to fill the void. He enters the stage in an outrageous red jumpsuit with his cool as fuck bass player Jennie Vee, all matched up in seasonal red with a hairdo to die for. They launch into We Are Family from Sister Sledge that just slays the rammed out venue from the start, with the funk that oozes out of this good time hard rock band. If you want serious or complicated music get right out of this room. 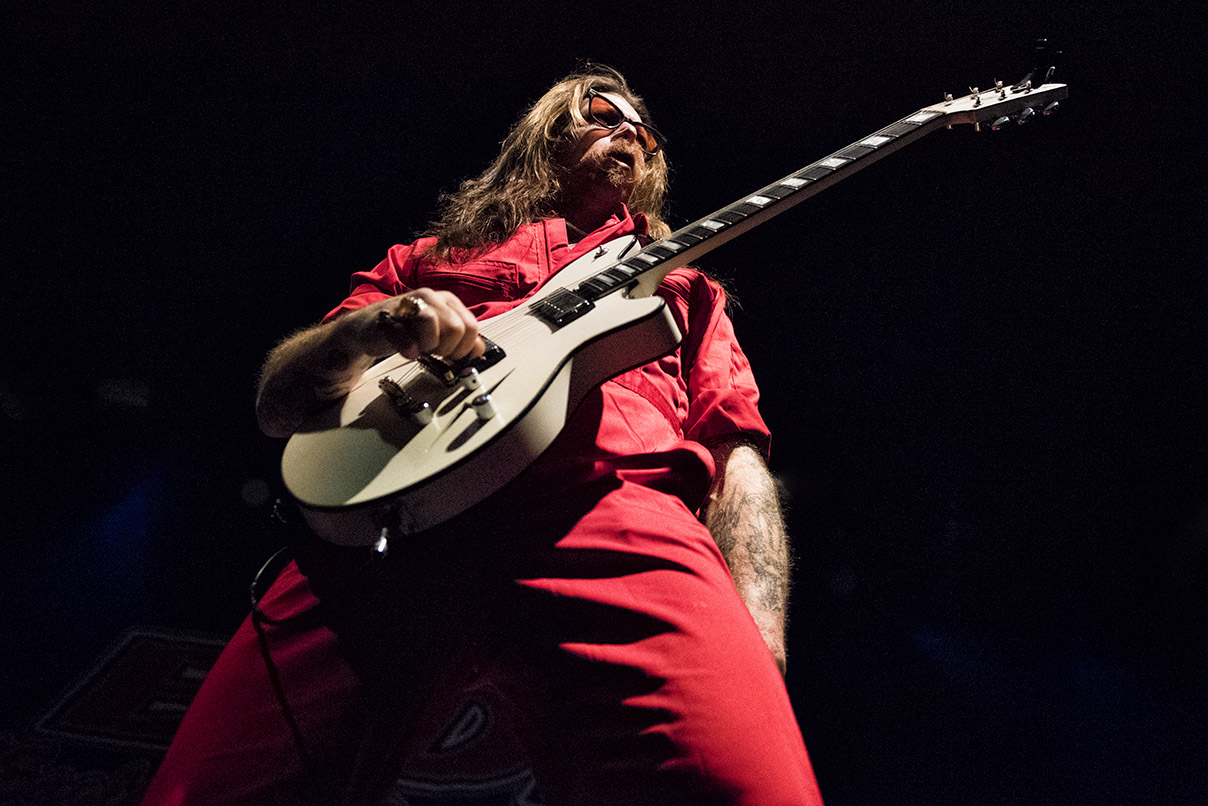 This is pure unadulterated fun from the start, especially when they air Don’t Speak (I Came To Make A Bang) which sounds massive, with the frontal force of bass and guitar from Jennie and Josh. The show goes on and the hairs on the back of my neck are tingling when they play the excellent Silverlake, which shatters the hungry audience with its country flecked hard rock noise. Cherry Cola is on fire and the crowd start chanting “Jesse, Jessie, Jessie” from here on. I’ve not seen a crowd in awe of a frontman like this for a while now. He’s just got the groove. He shimmies, he shakes, he body pops, fuckin ‘ell. He does a Boots Electric number, a brilliant I Want You So Hard and a magnificent cover of Bowie’s Moonage Daydream which lights up the venue it’s that good. Hughes is the master of the cover version and proves it to mass applause after pulling off a Bowie classic. 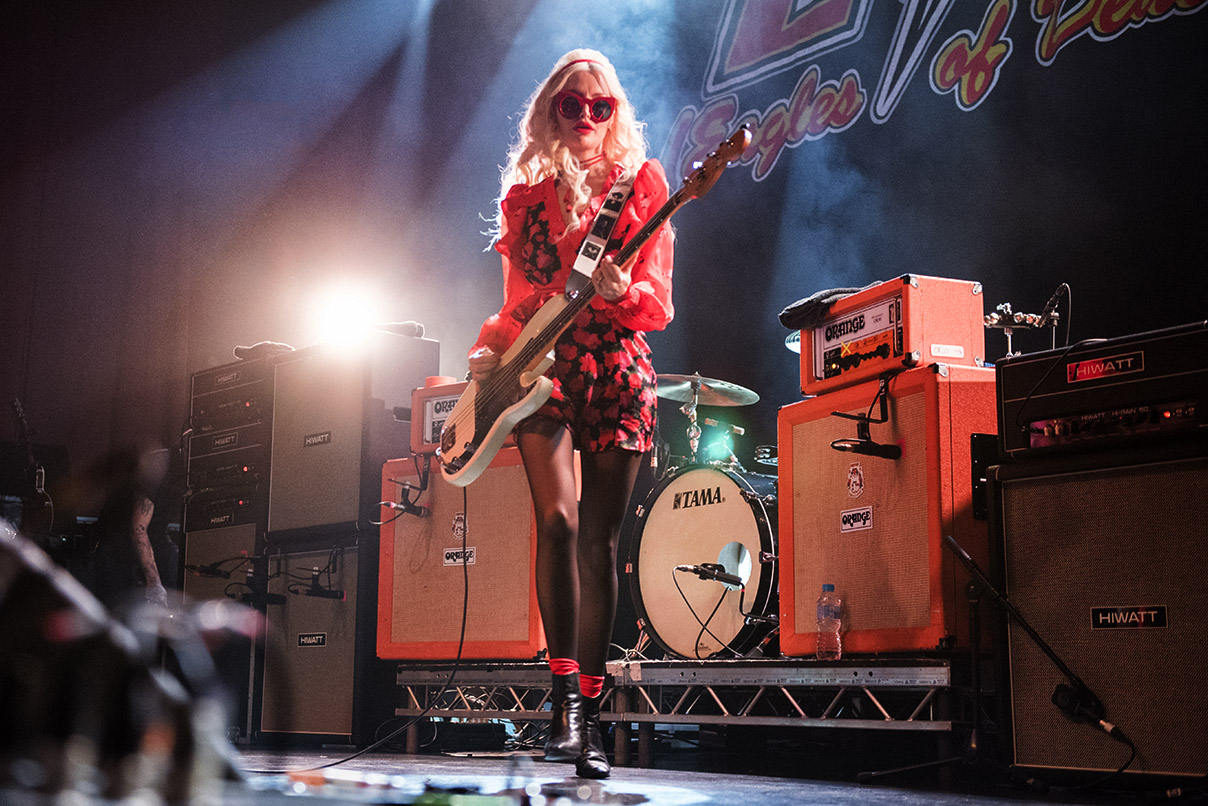 He leaves the stage and comes back on with full Elvis clobber, which is funny as fuck. He does the moves and we’re all pissing our sides when he does I Can’t Help Falling In Love With You, as good as Elvis could belt out. They leave the stage and you just know the encore will be special. 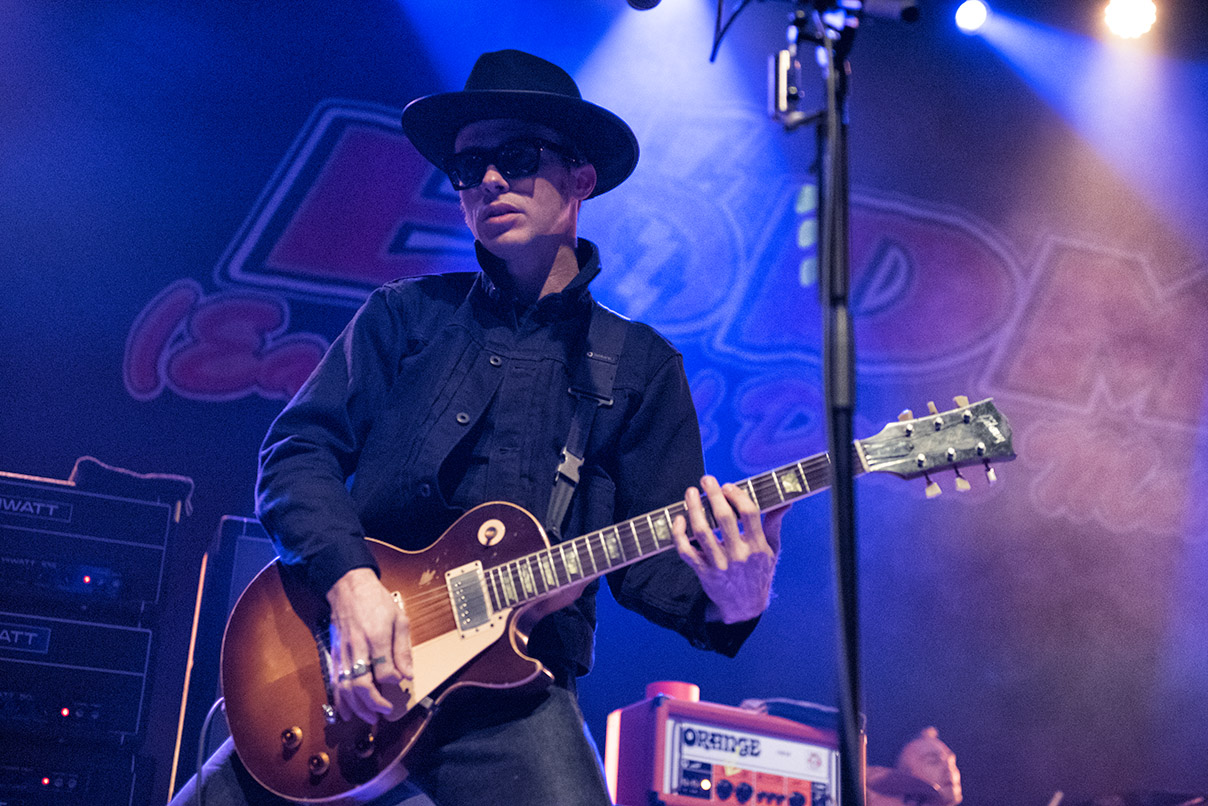 Back on stage, they launch into the best ever EODM song written. This is the fifth time I’ve seen them live, and they’ve never done it since supporting Foo Fighters at Old Trafford with Josh Homme on drum duties. The magnificent Speaking In Tongues, gets the full-on treatment. I’m dazed by that riff and the pure sound of filthy early Queens Of The Stone Age noise, that covers me in joy. Jesse is so impressed with this Manchester crowd tonight, telling us all it’s his favourite place, calling us all motherfuckers about a hundred times in a nice way and generally being a cool as fuck frontman. To end with a mad Ace Of Spades and a medley of Speaking In Tongues just makes me leave the venue thinking: Almost gig of the year. A night not to forget from one of the best front he/him/her/she people in the business. Top as fuck…

Words by Wayne Carey, music reviews Editor for Louder Than War. His author profile is here