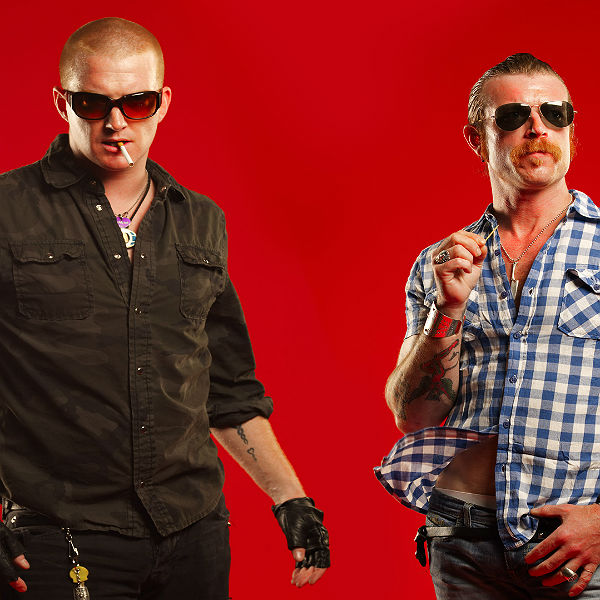 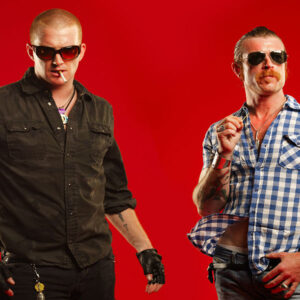 Our correspondent in Berlin Barry Lanigan gets re-aquainted with those Eagles of Death Metal.

Upon hearing that Eagles of Death Metal are in town tonight, it took me a minute to register who exactly they were again. I had seen them, for certain, somewhere, some years ago and loved them. Handlebar moustaches, sweat, lady-worshiping punk rock n rollers. With a tenner in my pocket and the promise of a free pass I simply couldn’t resist.

Their Monday night show is completely sold out so tonight is a warm up promo show sponsored by a leading spectacle and sunglasses manufacturer which I now have tattooed to my wrist as an entry stamp. I’m truly branded.

Having never stepped inside the old White Trash I cannot compare, but the newly relocated Treptow venue is pretty impressive with a large concert room, side rooms and bars inside and out, tattoo parlour, DJ Lounge and restaurant. Tonight you can get a regrettable drunken tattoo or a free spin-a-haircut – shaved, rockabilly or mohawk. There’s also speed karaoke where two young hopefuls are struggling to come to terms with a high speed Song 2 by Blur. Ugh.

Eagles of Death Metal come on around midnight and immediately I remember what I love about this band. Dirty repetitive punk rock n roll riffs, straight forward beats, ridiculously random stops and catchy choruses. These boys are carrying the torch for pure unadulterated rock n roll into the 21st century.

Singer Jesse Hughes is still sporting a handlebar moustache, aviators, lightning bolt guitar strap and all round knee-knocking rock n roll swagger and perfect for the gas-pumping hillbilly rock that he worships so much. His onstage persona is equally sleazy and endearing.

Probably not a feminist’s favourite, most mid-song banter with the crowd is making sure that the ‘ladies’ are alright are being well looked after. Chants of ‘ladies – yeah’ and ‘let’s hear it for the ladies’ are a given at an Eagles concert and the ladies love it. EDM have performed ‘Ladies Only’ shows in the past, but where men were also welcome in drag.

The band are amazingly tight and unbelievably rock n roll which isn’t surprising considering they are all spawned from or connected to rock giants Queens of the Stone Age and Desert Session projects.

Guitarist Dave Catching looks more Billy Gibbons every time and tonight he’s wielding a Flying-V. Rad! It’s also his birthday so he gets a happy birthday chant from the crowd, orchestrated by his increasingly excited frontman, as does a member of the audience whose birthday it is.

And I knew I recognised the drummer. Joey Castillo destroying the drum kit as usual with his rhythm sidekick Joey ‘Big Hands’ O’ Connor on the bass.

Hughes isn’t too happy about being told the band’s remaining time on stage is one number so they relentlessly play three or four more, the last being extended with a five minute blues jam that impressively finds it’s way back to it’s punk rock origin.

Eagles of Death Metal work tirelessly on stage and maybe had to work a bit extra tonight to a more neutral audience than their adoring fans, but people were boogieing right to the back of the hall. The sanctity of rock n roll is still intact.

All words by Barry Lanigan. More from Barry on Louder Than War here.