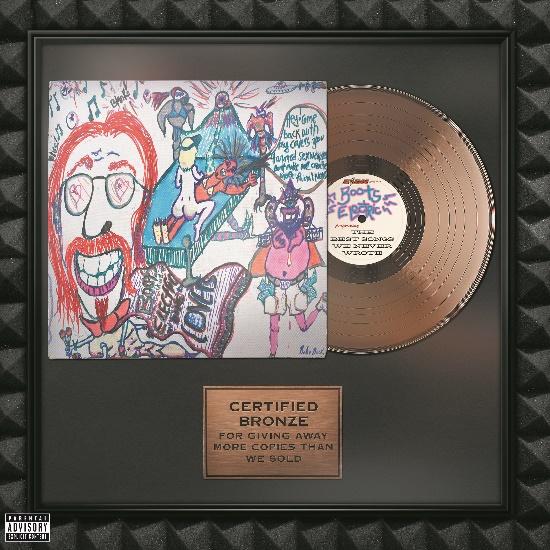 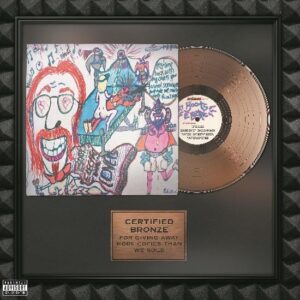 Jesse Hughes is no stranger to the odd cover version once in a while as I’ve witnessed live on a few occasions. Does doing an album full of them ruin his rock status cred? Not going by this tongue in cheek collection anyways….

Hughes has recorded and produced electrifying renditions of 13 songs he loves, joined by special guests for some tracks and flying solo for others. All but one song were recorded in California at Brunswick House of Dangerous Thoughts, Valentine Studios, and Rancho De La Luna. The album was mixed and engineered at Valentine Studios by Nic Jodoin (who also co-produced six of the album’s tracks with Hughes). Artwork for the album has been created by Hughes’ EODM co-founder, Josh ‘Baby Duck’ Homme. This is the first release since Zipper Down in 2015 and the terrible events at The Bataclan in Paris which had at one point surrounded Jesse with controversy.

I never thought I’d see the day of  reviewing an album of covers versions, yet when it comes to Eagles Of Death Metal I couldn’t resist. Jesse (aka Boots Electric) did a funny as fuck version of Stuck In The Middle With You live in Manchester a few years back but it worked, especially when a blow up sofa is being tossed around the crowd.

God Of Thunder from cock rockers KISS is a rock stomper, all glammed up with that trademark EODM sound that is their own nowadays, bluegrass rock funk with a shimmy. Guns N Roses – It’s So Easy is sexed up with that Jesse style, lots of “yey-aah’s”, and “oooh’s” going on backed by female vocals to give it that proper USA college feel and the usual Slash like guitar solo imitation. Where AC/DC’s High Voltage gets the glitter treatment to add to the stadium sound of the original.

So Alive by Love & Rockets lowers the pace with a smoking glam cover with a fuckin’ kazoo sound slotted in there! Mad. Beat On The Brat by The Ramones gets the primal treatment, slowed right down but essentially keeping to that New York sound with added EODM magic stomp.

Now it gets interesting! Abracadabra by The Steve Miller Band gets proper funked up, that blues grass swamp sound all over it, also including female vocals for the chorus. It’s fun and a great take on that well known 80’s classic. Careless Whisper by George Michael (if you haven’t heard it….) gets the glam treatment and Jesse sounds like he’s enjoying reconstructing this soppy love song, turning it into a freaky distorted disco thang. One of the highlights of this has to be the warped rework of Mary J Blige – Family Affair. It’s a fuckin’ excellent cover and Jesse proper camps it up, not throwing away that G Funk vibe and taking the song to another level.

He plays homage to his bezzie mate Josh (Baby Duck) Homme with a trademark EODM version of Long Slow Goodbye without murdering it, as he does with The Distillers tune The Hunger, stripped down and haunting. The whole album ends with a fucking awesome trio of Kenny Rogers & The First Edition’s Just Dropped In (To See What My Condition Is In), another highlight as he transforms this song from a country rocker to a summer swamped 60’s banger without any silly stuff, showing he can be serious at times. Same again with a cracker of a cover of Cat Steven’s Trouble which has style and shows he loves the songwriting of a true legend.

The strangest track has to be David Bowie’s Moonage Daydream. Recorded in a booth at Jack White’s Third Man Records it’s mad. Crackling vinyl sound effects, a simple acoustic guitar to the refrains of Bowie’s classic, even a nice little solo to added effect. It’s like listening to one of those old fifties Blues tunes recorded on the most primeval equipment he could find.

If anyone can do cover versions like this, reconstructing them to his own ends, yet staying true to the original, it’s Jesse Hughes. The majority of cover albums are fuckin’ shit. This one isn’t. End of.