Eagles of Death Metal transformed London’s Electric Ballroom into an ‘International Go To Party’. A good job that Louder Than War’s Andy Duke was on hand to take part in the revelry.

Eagles of Death Metal (EoDM) could easily sell out a much larger venue than The Electric Ballroom in Camden. By choosing a comparatively intimate location to unleash their fine noise, however, the gang have created an evening that feels like a private party rather than just an ordinary gig. But not just any kind of party. An ‘International Go To Party’.

The band waltz onto the stage to the sounds of Creedence Clearwater Revival’s Born On The Bayou with high spirits and refreshingly little urgency. With a cape draped around his shoulders, figurehead Jesse Hughes resembles a superhero who may have spent a little bit too much time in the desert. Not that this is a bad thing. Superman, for instance, could easily have benefitted from spending more time away from the stressful urban world of Metropolis. And, for much of the crowd here tonight, Hughes is a superhero regardless of his origins.

Rather than launching straight into their first number, Hughes stands upright with his guitar around his neck. His strings are ringing away and the rumble created is just on the verge of feedback. Staring at the mosh pit who are collectively jumping up and down before a single note has been played, the South Carolina-born frontman waves his finger at the pogo-ing disciples like a dismissive headmaster before the band kick off their set with I Only Want You. Despite the quartet’s tightness and infectious energy, the sound out front is akin to a bulldozer running at full throttle through treacle-like mud. Not that these sonic shortcomings really matter as everyone in attendance knows every word, beat and accent to the entire set regardless of the mix. And the mix does get better as the set progresses. EoDM are a big sounding band and that can be a challenge to tame in a venue of this size.

After a rousing version of Anything ‘Cept The Truth, Hughes scans the crowd for half a minute before saying “I wasn’t expecting such a badass crowd. The ferocity of y’all. I’m almost speechless”. Whereas some bands from the other side of pond brandish over the top praise all too easily about the quality of their audiences, there’s something about Hughes’ pauses between sentences that makes this experience feel decidedly from the heart.

Ultimately, EoDM are a celebration of all things that rock alongside all things that are fun. Costumes, hats and accessories are combined and exchanged throughout the gig. And, during Complexity, Hughes unleashes his inner-Roger Daltry by swinging his microphone with equal parts wild abandon and danger. Meanwhile, Jennie Vee impressively does the inverse of what most bassists do by only playing up at the dusty end of the fretboard. And she does this for the majority of the set. This non-standard approach trades the low-end in exchange for a driving force that opens up the sonic spectrum for drummer Jorma Vik to stand out while holding the foundation. And he does so with tremendous dynamic might. The stand-in for Dave Catching’s for guitar provides the final piece in the puzzle and runs the stylistic gamut from rockabilly to hard rock with a solidity that locks in with the rhythm section with the accuracy of a Swiss timepiece.

“I can’t fuck this up tonight”, says Hughes before the band tackle Secret Plans. It turns out that this is a very personal performance for the moustached musician. “I’ve got everybody here. My Sister. My Son. A Niece. Even a friend I’ve known since elementary school. They’re all here. Got people from San Francisco. Italy. France. It’s like a big International Go To Party and you’re all invited”.

And this International Go To Party enjoy some great surprises during the band’s set. Bon Jovi’s Wanted Dead Or Alive is given the full EoDM treatment complete with virtually everyone in the crowd singing the Richie Sambora call and answer parts from the original.

As a whole, I feel that the band embrace the fun factor more than tightness this evening. In addition, I wish Vee would concentrate a bit more on the lower frets of her bass to round off the group’s sound with a fuller low end. This isn’t to detract from her musicianship as her delivery consistently resides in the pocket and she’s also adept at tight ‘all downstrokes’ picking that Dee Dee Ramone would have been envious of.

During I Like To Move In The Night, Hughes disappears from the stage only to emerge from the rafters. With a slight nod to Thin Lizzy, both guitarists widdle and noodle over each other’s riffs between the stage and balcony. Following this, a seemingly impromptu version of Motorhead’s Ace of Spades features Vee covering both the bass AND guitar riffs on her lonesome self. And, just after closing their set with Speaking in Tongues – EoDM produce two floor-to-ceiling inflatable characters in front of the stage resembling the massive court jesters you would find in a Punch and Judy show.

While I enjoy the spectacle of these two figures, I am not familiar with what they actually are. I decide to call upon the expertise of a fan who is laughing loudly at their presence next to me. The affable man, who is sporting a trucker cap and double denim, turns out to be from Washington State. He informs me that EoDM had just blown up a pair of ‘air dancers’. These are used throughout the USA as an eye-catching means of advertising for everything from car dealers to clothing retail warehouses. So there you have it, a friendly chap from Spokane enlightens an ignorant Londoner like me about the marketing tools that are used in North America. This really is an International Go To Party. And it rocked.

Listen To This! Producer IYES Teams Up With LELE Once Again on Upbeat Anthem Change Your Mind 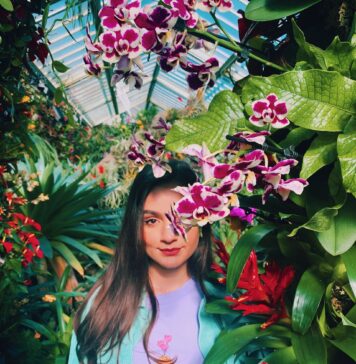 Watch this! Video exclusive – The Scaners drop new video for...

Martin Stephenson returns with a re-recording of acclaimed album