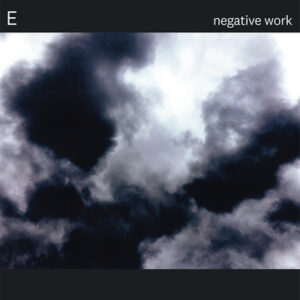 Louder than War’s Ioan Humphreys has a listen to the latest and brilliant release from E.

E, are the trio of Jason Sidney Sanford (Neptune), Thalia Zedek (Come, Uzi, Live Skull) and Gavin McCarthy (Karate). They make angular, energized, and idiosyncratic rock music and Negative Work is the second LP they have released together.

Recorded and mixed in 4 days at Machines With Magnets (Battles, Lightning Bolt), the album captures the energy of E’s gripping live shows. This 10 track album takes in influences and genres by the bucket full, then smashes them to pieces in a visceral and idiosyncratic way, only to spew them out into spasmodic and jolted post punk loveliness.

Opener Pennies has  stabs of distorted guitar that start the album and they quickly turn into a rhythmic riff that carries the track through with Thalia’s melodic vocal s that perfectly intertwine with dissonant guitar experiments, noisy percussion and an abrupt end. The Projectionist starts with spiky, jarring and clanging guitar mixes with Thalia’s heartfelt melodic vocals and the almost spoken word vocals of Sanford. The combination of differing vocal delivery is absolutely inspired and creates a perfect mixture with which the instrumentation and vocals can clash and create tension.

Follow up, Poison Letter has again, stabs of guitar, finger picking and measured vocals from Thalia. This is soon interrupted by huge slabs of guitar, and percussion that slices through the quiet with its infectious and relentless riff that builds and builds with added distortion and ferocity.

A House Inside has a quiet start with gentle drum flourishes and Sanford’s disquieting, vocals. There are start/stop slabs of melody and this is ramped up to a noisy and heartfelt finish. Unnerving, yet brilliant stuff.  Down She Goes is another great simple riff led track that is heavy on almost spoken word vocal delivery. It’s minimal, but it builds on its meagre foundations to create a hypnotic barrage that is over before you know it. Yet it stays in the skull for a long time after. Brilliant.

Like their debut album, Negative Work is full of sonic dissonance, experimentation and the shared vocals of Thalia and Sanford. Equal parts noise and melody, E straddle this always difficult balance with ease and make the result seem so easy. A force to be reckoned with and an already powerful second LP. E should not be underestimated.

Listen in for a snippet on the Bandcamp page.

E can be found on their Facebook and their label