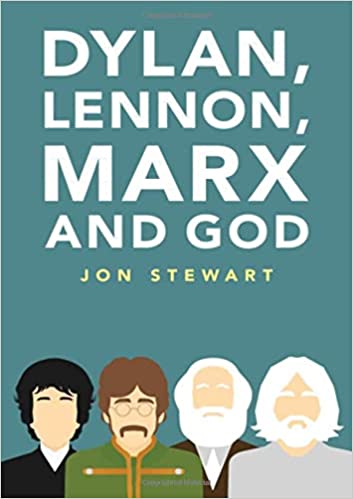 Dylan, Lennon, Marx and God, now that is some quartet who could boss the middle of the park for you. It’s also an original and absorbing perspective by which Jon Stewart compares and contrasts these gargantuan icons or deities if you prefer. Lennon and Dylan are both assured of their places in the cultural firmament, but Stewart takes us on a scholarly journey that makes skilful use of a wide range of sources (and let’s face it, there’s no shortage so it’s no mean feat.

Jon Stewart is the guitarist for Sleeper and since 2019 The Wedding Present. He is also Course Leader for the MA in Popular Music Practice at BIMM Institute in Brighton and has previously published academic work on the likes of Devo, Brian Eno and grassroots venues and this is a hugely impressive addition to his work. I must confess to having a large appetite for all things Lennon, much less so for Dylan but found myself hooked by Stewart’s approach of the Dual Biography, a rarely used strategy but one that can reveal so much more about both subjects. Stewart’s forensic lens of comparison examines the beliefs of Dylan and Lennon through the development of their songs, their view of history and their beliefs in spirituality and, in doing so, presents both in a way you may not have considered before.

The experiences of History by both men are a useful starting point in our comparison. That Lennon was a voracious reader as a child, indeed one who had read the entire contents of the Woolton Public Library is widely known. However, the notion of the importance of the Victorian and Edwardian periods as influences on him was certainly something I had never considered before. Likewise, Dylan has as his early influences Nineteenth-Century North American Literature, which he was far less keen to acknowledge than his Twentieth Century influences. However, Stewart points out the greatest significance was in both their abilities “to recognise and articulate these era-defining social and economic changes” that were taking place throughout the sixties.

Comparison is also made between Dylan and Lennon’s Anti-War Protest Music, with references made to Magnetic, Introspective and Rhetorical songs. Magnetic songs reinforce the value structures of individuals and aim for emotional responses to recruit individuals for particular causes. Let Me Die in My Footsteps is a rare example of Dylan’s use of this style while Lennon’s most obvious would be Imagine.

Rhetorical songs describe social problems and invite the listener to become angry about them but offer no solutions. A Dylan example here would be ‘Blowin’ in the Wind’ while Stewart offers ‘All You Need is Love’ as an example of Lennon’s Rhetorical song.

Introspective songs are far less obvious in their meaning and require the listener to think hard about the meaning of the lyrics and this is well illustrated by Tombstone Blues from the Dylan catalogue. The example of Lennon’s Introspective song, The Word, was a revelation to this reader, if you will forgive the pun. Love is defined as a concept rather than that of something between boy and girl and is done so by reference to the Bible; the opening words of the Gospel of John are “In the beginning was the Word”. Go and listen to the lyrics again, unless you had this sussed years ago. This is the true joy of Stewart’s work; no matter how well you think you know your subject matter, you will find a new perspective or nuance you hadn’t considered and this makes it a must-read for fans of either or both men.

The evolving moral systems of both men are also examined and unsurprisingly, Lennon had the longer journey to travel on. While we read of Dylan’s ability to gain an affinity for the characters in his songs, such as the murder victim in The Lonesome Death of Hattie Carroll, or the painstaking depiction of the finger on the trigger that led to the assassination of Medgar Evers in Only a Pawn in Their Game. Lennon, however, famously transitioned from the bullying thug of the early Beatles days where violence was routinely inflicted, most famously on his own wife Cynthia and on DJ, Cavern Club Compare and friend of the band, Bob Wooler. He admitted the line in It’s Getting Better All The Time, “I used to be cruel to my woman I beat her and kept her apart from the things that she loved” was about himself, “I am a violent man who has learned how not to be violent”.

Religion and spirituality was another journey for both men with Dylan making a hard to define journey through Judaism and Evangelical Christianity evidenced, among others by 1980’s Are You Ready?. Lennon meanwhile travelled from initial sceptic to “a point of messianic delusion”; calling the Beatles together at Apple’s Savile Row office. He calmly outlined to them that he was, in fact, the Second Coming: “I’ve got something important to tell you, I am Jesus Christ, I’ve come back again”. Thankfully we can depend on Ring Starr to burst his bubble with a brilliant retort, “Right, meeting adjourned, let’s go have some lunch”. A perfect image with which to conclude a review of this essential book; the self-deluded idealistic rock star being metaphorically clipped round the ear and brought back to Earth by his working-class bandmate.

Jon Stewart has delivered an authoritative, original and unmissable overview of two of the titans of Twentieth Century music and culture scene. Every page is crammed with thought-provoking analysis and comparisons that, no matter how well you think you know Dylan and Lennon, will offer you an intriguing new perspective.

Jon Stewart is the guitarist for Sleeper and (since 2019) The Wedding present. He is also Course Leader in the MA in Popular Music Practice at Brighton BIMM.