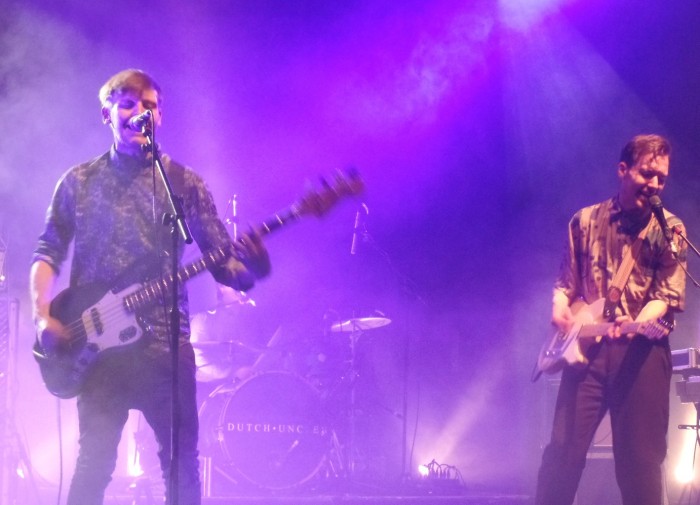 Paul Holloway reports back from Manchester’s The Ritz where Dutch Uncles headlined a show which also featured Slug and Brown Brogues.

The Dutch Uncles are Manchester’s best kept secret. Four albums in they are adored by those who are in the know, including long time fans Marc Riley (Lard) and Mike Joyce (Smiths) both of whom are here tonight, stood towards the front of the audience with big grins on their faces.

There is a more than a hint of 80s pop about their music, but this isn’t retro nostalgia. Their approach of weaving in multiple layers, whether it’s guitar hooks, synthesisers, strings, duelling xylophones or a variety of other percussion instruments, together with their use of unconventional time signatures – gives the Dutch Uncles a quirky and sophisticated edge. All this is achieved whilst creating well-crafted pop songs.

So tonight’s gig is a big deal – their biggest headline gig to date in their home city and one of only three headline dates in England to launch their new album. The others being Koko in the Big Smoke on 10 April (tomorrow) and a warm up gig in Stoke. 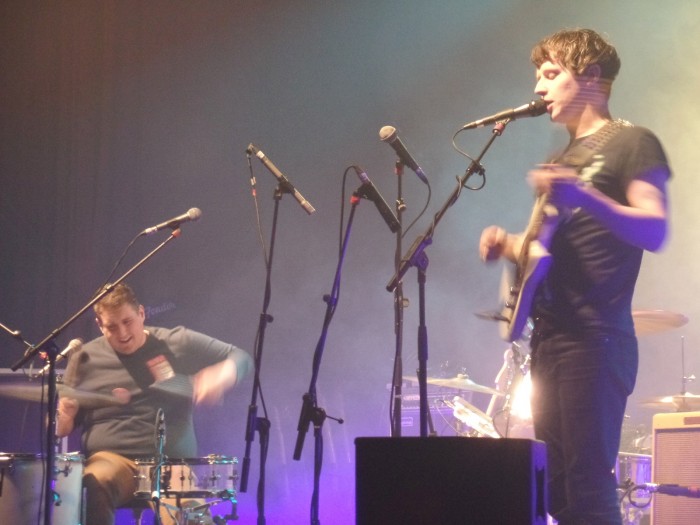 Let’s start with the support bands. A late addition to the bill is Wigan’s Brown Brogues who start proceedings; a duo of Ben Mather on drums and Mark Vernon on guitar. You’ve got to put in some serious effort to make a big noise as a two-piece, especially if you are setting out to rock out, and you can’t fault Brown Brogues’ effort.

Mather in particular makes a big noise with what’s essentially half a drum kit; just a floor tom, a snare drum and a cymbal. I’m knackered just watching the big fella putting in a shift and a half. There are some decent guitar riffs that appeal to my punk rock sensibilities and some whooping harmonies. However, the sound could be cleaner, Vernon spends half the set with a big chunk of the mic inside his mouth.

Brown Brogues don’t take themselves too seriously with song titles like ‘Getting caned in the face with an ashtray’ and by describing themselves as DIY Fluffers on Twitter. There is definitely potential here, it just needs a bit of polish.

Second support slot is filled by Sunderland quintet Slug, stablemates of the Dutch Uncles on Memphis Industries. Field Music’s David and Peter Brewis have found the time to play in Slug with their former bass player Ian Black who fronts the band.

Slug have a look; collectively the band are wearing black polar neck tops and everybody bar Ian Black is sporting a pair of black NHS specs, (with plain or no lenses I suspect.) It’s geek chic and mixed with Black’s soft Mackem accent and his dry military style salutes to the audience; it’s a look they pull off.

They set the stage up themselves, which includes two upturned empty bottles of designer German lager placed carefully next to a triangle. Marc Riley can’t resist popping over to stage left to snap Slug on his mobile. He has been championing the band who recently appeared on his radio show togged out in matching evening suits with tails. 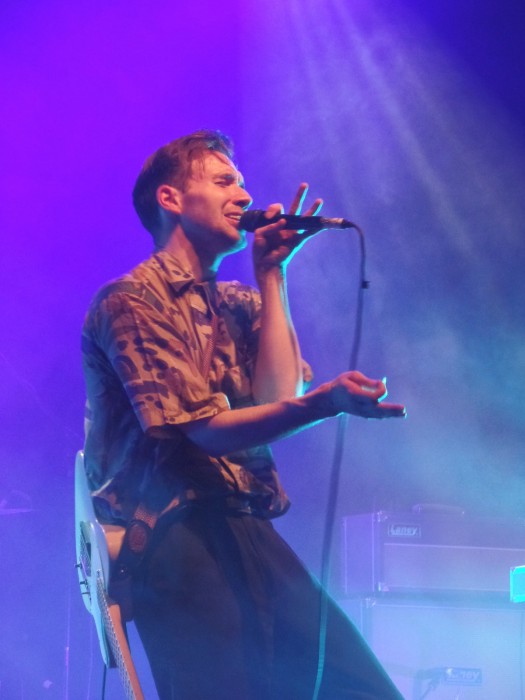 Slug’s debut album, RIPE is released on 13th April and on this showing it should be an exceptional listen. Check out ‘Cockeyed Rabbit Wrapped in Plastic’ and ‘Greasy Mind’ for a taster of their whimsical off the wall pop.

So on to the main event, Marple’s mighty Dutch Uncles. They are playing to their home crowd for the first time without guitarist Sped who left the band just as their fourth and latest album ‘O Shudder’ was released.

The Dutch Uncles came in to see me at Pure 107.8FM to discuss their new album just before it was released. “Is Sped coming?”, “Mmm, well he’s no longer in the band”. The timing of Sped’s departure left the boys with some re-thinking about how they were going to play their new record live. So they have enlisted the help of their guitar tech Neil Wright, who used to play in 52 Teenagers and The Alpha Machine.

Henry Broadhead, brother of the band’s other guitarist Pete, has also been enrolled to join the band playing live and he supports his brother and frontman Duncan Wallis as they both switch between guitars, keyboards and xylophones. Whilst Robin Richards and Andy Proudfoot anchor the ship with a McVie-Fleetwood like tight rhythm section.

In Henry and Neil they have two trusted and able musicians that can help them deliver live. The band put out a statement saying “Sped has decided to pursue other interests away from Dutch Uncles. His departure from the band is amicable and we thank him for all his time with us and wish him the very best of luck for the future.” I get the impression talking to the guys that the statement is genuine. It seems Sped’s creative and working relationship with the band had just come to the point where it wasn’t working the way it once did. The timing of his departure wasn’t ideal but it’s giving the band the opportunity to regroup and refocus.

The Dutch Uncles seem to have made a natural step up. Their latest record is their most accessible to date without pandering to trying to make it more commercial (I don’t think that is something in their DNA anyway.) Also gone are the abstract one word song titles about musical terminology (Cadenza & Brio) or chess moves (Zugzwang). Well nearly gone, the except to the rule is the brilliant 80’s synth-pop single ‘Upsilon’; the Greek letter ‘Y’ which is sometimes used a metaphor for being at a junction – do you choose the path of righteousness or give into temptation?

The clichés about a band maturing and natural musical progression really do apply here. They have also decided to focus on playing mini-city festivals rather than touring the album with headline gigs. So this is a rare treat and now with four albums in the back catalogue to throw into a rarer full length set; they feel like an established band rather than a band promoting a new record. Especially here in front of their home crowd, there are plenty of old favourites to pepper the set with.

The puppet of frontman Duncan Wallis which appears in the video of one of ‘O Shudder’s’ outstanding tracks ‘Decided Knowledge’ makes an an appearance on a speaker tower as the band play the song live. The lyrics were inspired by an awkward job interview.

The gig was a complete triumph, and the encore saved a couple of treats. The marvellous ‘Steadycam’ which in my opinion is the best song on their self titled debut album received a rare outing having been dropped from most gigs since the release of ‘Cadenza’ in 2011. For the finale female Scouse three piece ‘Stealing Sheep’ join the band on stage to provide backing vocals for ‘Be Right Back’. The girls are wearing smiles from ear to ear, they have obviously been enjoying this gig as much as the audience and the band.

If you get the chance to see the Dutch Uncles live this summer or spring, you should take it.

All words Paul Holloway. More writing by Paul on Louder Than War can be found at his Louder Than War author’s archive. Paul also presents Living For The Weekend on Stockport’s radio station Pure 107.8FM every Fridays 11am-2pm & Saturdays 8-11am.