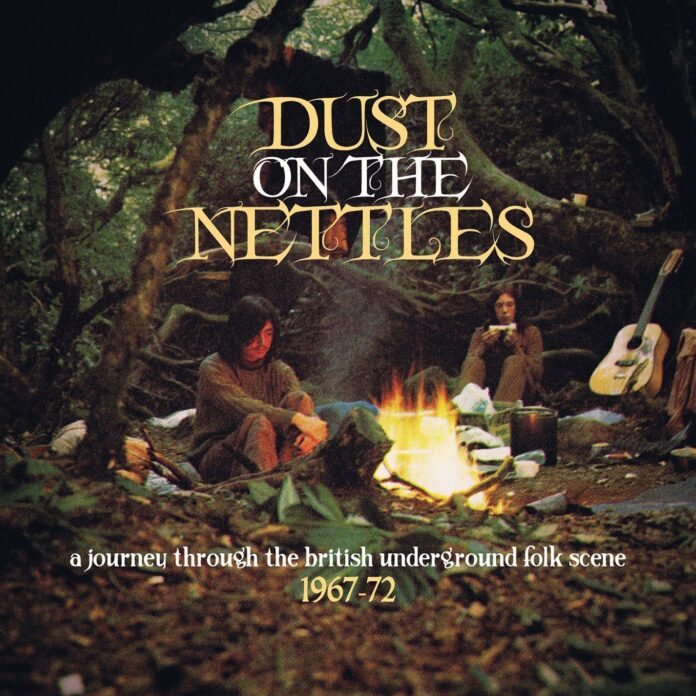 By the turn of the ‘60s, the white heat of revolution was giving way to something altogether more backward facing – be it the resurgence of interest in the blues across the Atlantic, or even the Beatles’ swift retreat from the great sonic march forward at home, the future was becoming something of the past as the swinging decade petered out, casualties abounded. One of the most intriguing developments at this point would be the metamorphosis of British folk at the hands of a young British audience keen to understand the folk tradition only to subvert it. With sixty-three tracks spanning four hours across three discs, Grapefruit Records’ ‘Dust on the Nettles’ is a document of this metamorphosis, often termed ‘acid folk’. Thorough without being exhaustive, it’s testament to the eclecticism within folk at the fag-end of the 60s that the compilation proves such a varied listen – be it the paganism of the Wicker Man soundtrack or the terrifying wig-out of Beau (whose joyous ‘Silence Returns’ is the penultimate track on the compilation), the full gamut of where folk went between 1967 and 1972 is explored here.

With their intoxicating, jazz-tinged interpretation on traditional folk, it’s wholly fitting that Pentangle’s highly sophisticated understanding of just where folk could go begins this compilation, though in reality it was the Incredible String Band that fired the starting pistol on the movement that makes up this compilation. Though bright talents in the London folk clubs such as Burt Jansch and one Paul Simon were emerging, folk in Britain held fairly minimal allure to counter cultural types in the mid-60s. The arrival of the Incredible String Band changed this; by 1968 their albums were in the top 5, and an emerging network of arts labs, university scenes and free festivals were rapidly ripping up folk convention and adding a dynamism that thrilled young radicals disillusioned with the perceived materialism of mainstream pop and rock.

Many of the obscurities sourced by curator David Wells for ‘Dust on the Nettles’ are staggering in their quality – listen to a track like the Traffic-esque ‘Pilgrim’ by Gerald Moore and marvel that not only was the song not a hit, it was not even released at the time. Likewise, the only single ever released by early 70s outfit Hunt, Lunt and Cunningham ‘Meanwhile Back in the Forest’ is as gorgeous and shimmering a pop-folk offering to never trouble the charts. These are but a few of the excellent nuggets that make this compilation quite so engrossing, sat side by side with real curio’s such as the previously unreleased ‘Seagull’s Scream’ by 17 year old Cornish singer Chrissie Quayle (a plaintive strum made truly haunting by overdubbed seagull calls). There are, of course, familiar names amongst the obscurities – Steeleye Span, Fairport Convention at their Sandy Denny high water mark, the nascent Tyrannosaurus Rex – as well as unlikely versions of standards including a wailing ‘Black Girl’ and a majestically innocent airing of ‘Scarborough Fair’ (500 copies of this version were pressed, and up to half of those destroyed in a flood).

Economically packaged, but replete with fascinating, thorough and often amusing sleeve notes, ‘Dust on the Nettles’ is a steal at £20 and one of 2015’s most delightful re-appraisals of an often ignored aspect of British music history, with much to feast upon for both seasoned folk heads and those new to the genre alike.

To listen to the strange brew podcast about this release click here.

Find out more about this release / buy a copy on Cherry Red’s website.